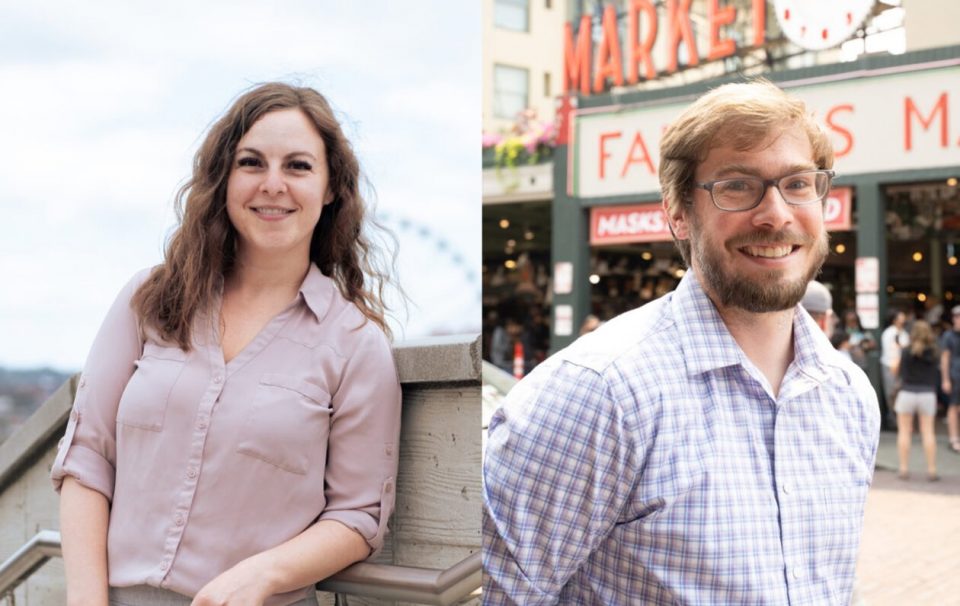 A biotech startup born of an academic research project and inspired by emerging companies led by scientific founders is growing in Seattle. Talus Bioscience has raised $9.75 million in new funding to advance its drug discovery platform to find compounds that affect gene activity.

The company is in the “early exploration” stage of forming partnerships with biopharma companies and is also working on its own drug targets, said CEO Alex Federation, a biochemist and computational biologist.

Federation paired up Lindsay Pino, who has a background in biochemistry and machine learning, to found the company in 2020, fueled by a $255,000 small business grant from the U.S. National Science Foundation and $1.5 million in pre-seed venture capital funding led by Fifty Years.

The pair forged the company from a research project started while Pino was a graduate student at the University of Washington and Federation a postdoctoral fellow at the Altius Institute for Biomedical Sciences, a Seattle nonprofit research institute that focuses on understanding how genes are regulated.

They were inspired to start Talus by the growing number of biotech companies, many in Seattle, with leaders who developed their company’s technology, Federation said in an interview with GeekWire.

In Seattle, “there’s this different culture of founder-led companies, like how tech companies usually are,” said Federation.

The company told GeekWire Monday that it recently landed $2.75 million in small business grants from the U.S. National Institutes of Health and $7 million in venture capital funding led by NFX.

Talus has 13 employees and recently brought on a COO, Michelle Briscoe, who previously served as president and CEO of Brooks Applied Labs, a Seattle area analytical chemistry company.

From research project to startup

Talus’ origins reach back more than four years ago, when Federation and Pino were trainees at Altius and the UW. There, the pair collaborated on a way to purify and analyze transcription factors.

Many transcription factors are considered “undruggable,” said Federation. When isolated from cells, “they kind of just fall apart. You can’t do structural biology. You can’t do the normal experiments that you would in drug discovery.”

Federation helped develop a way to purify transcription factors while keeping them intact. His method also enabled the processing of hundreds of samples simultaneously, in small wells on plastic plates.

The pair published their findings in 2020 in Cell Reports. Talus’ team has spent the last two years perfecting their methods, making them faster and more robust.

Talus can now purify proteins from hundreds of samples in twenty minutes and run the data through their software program to tell how potential drugs affect the collection of proteins that regulate gene activity. Many researchers call that set of proteins “the regulome.”

“For every part of the regulome, and every drug that we test, we get a completely full matrix,” said Federation. “We can see how every drug affects every protein in every experiment.” And that helps researchers understand if their compound is having an effect on gene activity and disease.

The platform is dubbed MARMOT, for “Multiplexed assays for the rational modulation of transcription factors.”

After they finished their studies at Altius and the UW, Pino and Federation went on to other endeavors. Pino started postdoctoral studies in Philadelphia and Federation took a job at Seattle biotech company SEngine Precision Medicine, which markets a test to analyze tumors at the molecular level. “We went our separate ways,” said Federation.

But the pair stayed in touch and kept talking about the potential for the technology they had developed.

“We were in the middle of COVID, so not much else to do. And we asked, ‘why don’t we try to do this for real?’ And that’s when Talus came about,” said Federation.

Pino and Federation were more familiar with biotech models in which venture capital firms build a leadership team and find a seasoned CEO, a trend more common on the East Coast, said Federation.

But in Seattle, the pair were inspired by SEngine and companies like UW Institute for Protein Design spinout A-Alpha Bio, led by CEOs who helped develop the underlying technology. Other Seattle companies led by scientific founders include Parse Biosciences, Allen Institute for Artificial Intelligence spinout Modulus Therapeutics, and IPD spinout Monod Bio.

“Over time we were able to meet some of those people and learn about the fact that this [scientific founder-led model] is becoming more common in biology,” said Federation.

Deep familiarity with their technique enables Federation and Pino to effectively communicate with potential partners and collaborate closely with other scientists. “We’ve been so deeply embedded in this technology we can understand how it should be built and how it should grow,” said Federation.

CBD gets the headlines…But what else can you do with hemp? – Dr Watson CBD