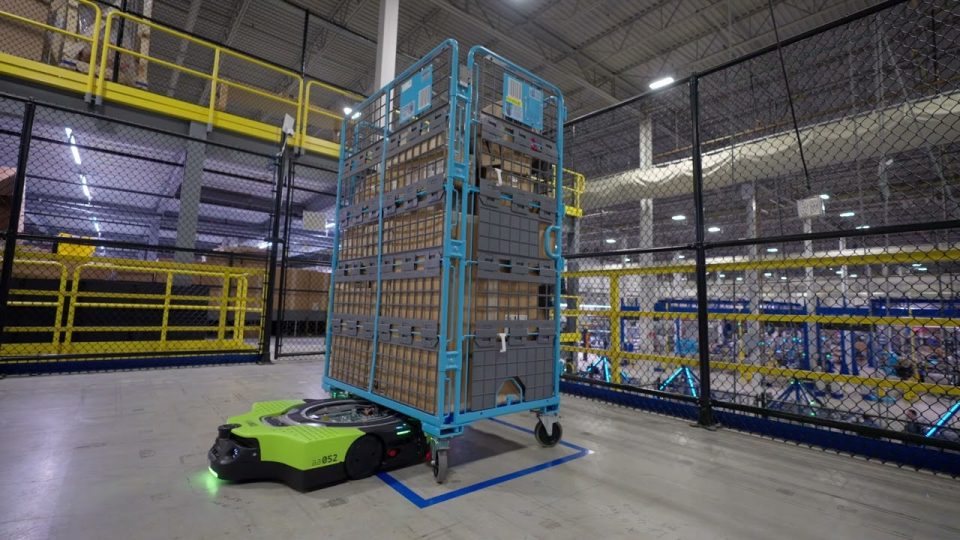 LAS VEGAS — Amazon unveiled a new fleet of robots and automated systems, including the first fully autonomous robot that the company says can operate safely alongside humans on the warehouse floor.

The robot, dubbed Proteus, will automate the movement of large and heavy rolling carts of packages that workers currently push manually through areas of fulfillment and sort centers where existing Amazon robots can’t go.

“Proteus autonomously moves through our facilities using advanced safety, perception, and navigation technology developed by Amazon,” the company says. “The robot was built to be automatically directed to perform its work and move around employees—meaning it has no need to be confined to restricted areas.”

The technology is part of a promised wave of automation meant to improve productivity and safety in the company’s warehouses. Amazon faces ongoing scrutiny over injury rates, and the issue has helped to fuel a union uprising in its fulfillment network.

Amazon made the announcement Tuesday night in advance of a related keynote session at its re:MARS conference (machine learning, automation, robotics, and space) in Las Vegas. Tye Brady, chief technologist for Amazon Robotics, is expected to provide more details during an address here Wednesday morning.

The company moved into robotics 10 years ago with its acquisition of Kiva Systems. Amazon asserts that it has proven critics of automation wrong by expanding both its human workforce and robotics fleet since then. The company says it has 520,000 robotic drive units and has added more than a million jobs worldwide.

Other robotic systems shown for the first time included “Cardinal,” which uses AI and computer vision to select and lift packages, read labels, and sort them into the right carts.

Amazon says Cardinal “reduces the risk of employee injuries by handling tasks that require lifting and turning of large or heavy packages or complicated packing in a confined space.”

Amazon says it’s currently testing a prototype that can lift packages up to 50 pounds, and it expects Cardinal to start rolling out to its fulfillment centers next year.

Another new system, called AR ID, uses computer vision and machine learning to automatically detect and scan labels on packages moved through an area, reducing or eliminating the need for employees to use the handheld scanners that are currently ubiquitous in the company’s warehouses.

It’s analogous to a scanner machine at a store self-checkout, no longer requiring the barcode to be perfectly aligned.

“AR ID removes the manual scanning process by using a unique camera system that runs at 120 frames per second, giving employees greater mobility and helping reduce the risk of injury,” the company says. “Employees can handle the packages freely with both hands instead of one hand while holding a scanner in the other, or they can work to position the package to scan it by hand.”

Lastly, the company showed a new automated Containerized Storage System that it says will reduce the need for employees to stoop, reach up or climb ladders to retrieve or stow products, bringing the containers to them instead.

We’ll have more from Amazon re:MARS in upcoming posts.