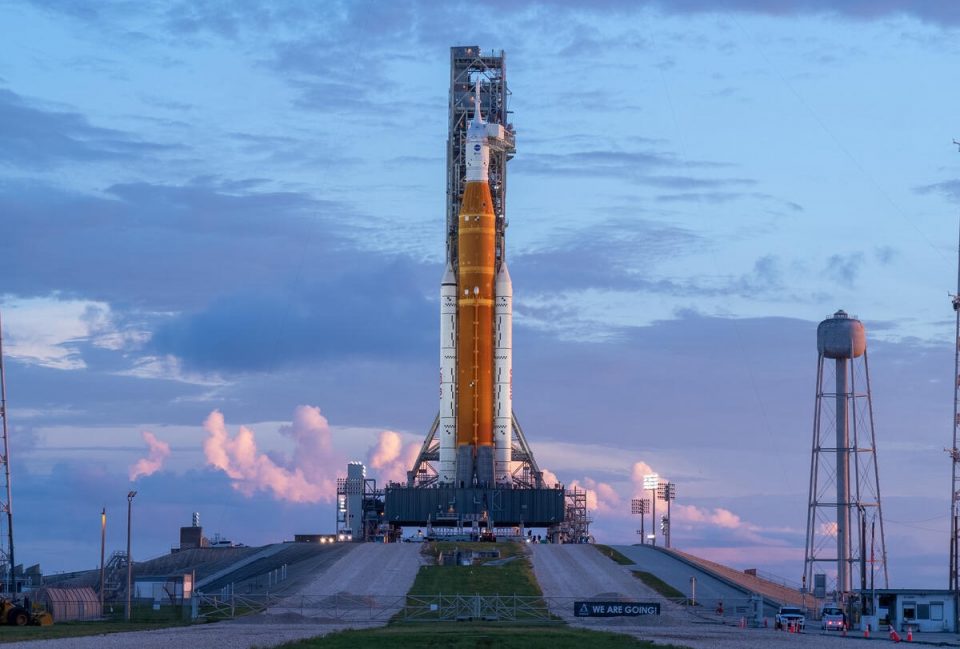 More than 100,000 people are expected to overwhelm Florida’s Space Coast on Monday morning to watch NASA’s most powerful rocket lift off on a history-making Artemis 1 mission to the moon and beyond — but if you can’t make it in person, watching the launch online may well be the next best thing.

NASA’s Space Launch System rocket is scheduled to blast off from Kennedy Space Center’s Launch Complex 39B at 8:33 a.m. ET (5:33 a.m. PT) Monday, at the start of a two-hour launch window. Forecasters say there’s an 80% chance of acceptable weather at the beginning of the window, declining to 60% by the end.

No significant problems have turned up during the countdown, senior test director Jeff Spalding said today. “We are prepared for anything,” he told reporters. But if weather or technical issues force a postponement, Sept. 2 and 5 are the backup dates for launch.

Streaming video coverage is set to begin at 9 p.m. PT tonight on NASA TV with commentary on the SLS fueling operation. The coverage goes into full swing at 3:30 a.m. PT Monday. (Check out the full schedule.)

The Artemis 1 mission calls for the first-ever SLS launch to send an uncrewed Orion spacecraft on a 42-day test flight that features a wide-ranging lunar orbit, coming as close as 62 miles to the moon and ranging as far as 40,000 miles beyond the moon. That will set a distance record for any spacecraft designed to carry astronauts.

At the end of the mission, the Orion capsule will come screaming back to Earth at 25,000 mph, heading for a Pacific Ocean splashdown. One of Artemis 1’s prime objectives is to test the performance of Orion’s heat shield at atmospheric re-entry temperatures ranging as high as 5,000 degrees Fahrenheit.

NASA and its commercial partners have been working toward this flight for more than a decade. Artemis 1 represents the first real-world test of the SLS-Orion system, setting the stage for Artemis 2’s crewed round-the-moon flight in the 2024 time frame and Artemis 3’s crewed moon landing in 2025 or 2026.

Merely watching the launch should be a thrill — and if you’re watching at home, be sure to turn up the sound. “Put this down first: It’s going to be loud,” NASA’s chief SLS engineer, John Blevins, told Florida Today. With liftoff thrust of 8.8 million pounds, the SLS is 15% more powerful than the Apollo era’s Saturn V rocket.

Before the fireworks, the countdown will feature plenty of star power: Vice President Kamala Harris and her husband, Doug Emhoff, will be in attendance. Singer Josh Grobin will team up with pianist Herbie Hancock to perform the National Anthem, the Philadelphia Orchestra and cellist Yo-Yo Ma will play “America the Beautiful,” and actors Jack Black and Chris Evans will also be part of the show.

Why all the flag-waving? It’s only natural to make a big deal out of the first launch in a program that’s meant to put the first woman and the first person of color on the lunar surface, 50 years after Apollo’s last moon mission. And looking beyond the history, this is a chance for NASA to grab the spotlight from commercial space ventures such as Elon Musk’s SpaceX and Jeff Bezos’ Blue Origin.

SpaceX already has a supporting role in Artemis, by virtue of its contract to provide the lunar lander for Artemis 3’s crew. Blue Origin is also hoping to win a share of NASA’s business for future Artemis missions. But there’s a risk that some in Congress may look at the Artemis program’s cumulative cost (recently estimated at $93 billion through 2025) — and wonder whether, say, SpaceX’s Starship super-rocket could do the entire job at a lower price. A crowd-pleasing success for the SLS could forestall that kind of second-guessing.

Bhavya Lal, NASA’s associate administrator for technology, policy and strategy, emphasized during a pre-launch briefing that Artemis 1 would help lay the groundwork for more than a decade of exploration on the moon, Mars and beyond.

“What we are starting with the launch Monday is not a near-term sprint, but a long-term marathon to bring the solar system and beyond into our sphere,” she said.

The experiments packed aboard Artemis 1 point to that long-term perspective.

Although no humans will be riding in this Orion spacecraft, three instrumented mannequins — led by a dummy nicknamed Commander Moonikin Campos — will collect data about environmental conditions during the trip. In collaboration with NASA, Cisco and Lockheed Martin, Amazon is flying an Alexa-style voice assistant named Callisto that could provide information (and companionship) for future crews heading for the moon or Mars.

The SLS rocket will also deploy 10 nanosatellites as secondary payloads for scientific research, including a Japanese probe that will try to make an airbag-cushioned landing on the moon.

So, as impressive as Monday’s launch promises to be, Artemis 1 is about much more than a big bang.