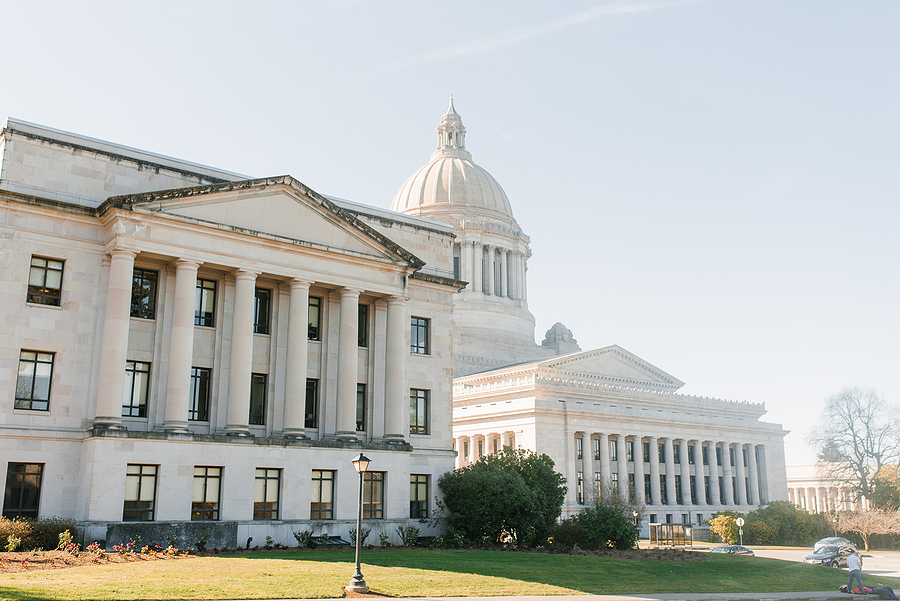 The Washington state Supreme Court will hear arguments this week on whether a statewide tax on capital gains in excess of $250,000 is lawful.

The capital gains tax, approved by the legislature and signed by Gov. Jay Inslee two years ago, made waves in the tech industry since it targets stocks, which can be a key part of compensation for tech workers.

Last year, a Douglas County Superior Court judge struck the law down on the grounds that it violated Washington’s constitutional mandate for taxes to be applied uniformly.

The state Supreme Court agreed to take up the issue following an appeal from Attorney General Bob Ferguson, and the controversial case could potentially turn Washington’s longstanding ban on income tax on its head.

How does the capital gains tax work?

The law imposed a 7% tax on capital gains of more than $250,000 from the sale of stocks and bonds, excluding revenue from real estate and retirement accounts, among other exceptions.

The estimated $500 million in yearly revenue the tax is expected to generate is earmarked to be funneled into early-childhood education programs and school construction. And advocates say it’s one way that Washington’s regressive tax laws can be altered to level the playing field for people of color and rural communities.

“Our upside-down tax code means people who are Black, Indigenous or people of color shoulder more than their fair share of the responsibility for fundings schools, healthcare and other important community structure,” said Andy Nicholas, a senior fellow at the Washington State Budget and Policy Center, in a panel organized by tax-reform advocates at Invest in WA. “And the same is true for many of us who live in rural communities.”

Revenue from the tax is already being used to build an early-childhood-education infrastructure.

“It would be a shame for us to retroactively go back to a day when there was inadequate funding for K-12 and early learning,” said Stephan Blanford, executive director of the nonprofit Children’s Alliance, during the panel.

There are generally two sides to the debate around Washington’s tax code: those who want to continue with a tax structure that relies heavily on sales and property taxes to fund government programs, and those who’d like to tax wealthy residents more heavily — possibly even instating an income tax by overturning a 1933 court ruling that classified income taxes as property taxes and must therefore be applied uniformly to all citizens.

This case touches on those conflicting goals, but it’s not clear how far arguments will wade into the quagmire of constitutional reform.

“The principal issue before the court is, what is the proper characterization of the capital gains tax?” said Paul Lawrence, an attorney for Pacifica who is arguing this week on behalf of school districts, educators, and parents.

In other words: is this a transactional excise tax or an income tax?

Jason Mercier, director at the Center for Government Reform at the Washington Policy Center, has been a vocal opponent of the new tax on the grounds that it constitutes a tax on income.

“I don’t know how there is any debate about whether this is an income tax,” he said. “Literally every tax professional in the world, from the IRS, to every other state, to other countries will tell you the same thing — capital gains are income and taxes on them are income taxes. Washington stands alone claiming this is an excise tax.”

“If you own property and sell it, you’re subject to an excise tax,” he said.

But if the Supreme Court strikes down the new tax law, Lawrence said his team will move into a second phase of defense: working to change a ruling that goes back almost 100 years.

“If the Supreme Court holds that the excise tax is indeed an income tax, we raise the argument that the cases that go back to the 1930s holding that an income tax is a property tax under Washington law were wrongly decided and should be revisited and overturned,” Lawrence said.

How likely is it that this case will actually change Washington’s income tax law?

Hugh Spitzer, a constitutional law professor at the University of Washington, has been a prominent proponent of changing the way Washington state taxes citizens. He favors creating a system that incorporates a moderate income tax to create similar tax-payment percentages across income levels.

“If the court were to overturn the 1933 case, it would enable the legislature and the people to have a tax system that was more stable with a lower sales tax rate, lower property tax rate, but then a modest income tax,” Spitzer said.

But he’s not holding his breath that this case will be the spark that ignites that kind of constitutional change.

“While I’d be thrilled if our state Supreme Court were to overturn the 1933 case, and expressly say that an income tax is constitutional, practically speaking, my guess is they’re not going to do it,” he said. “It’s very straightforward and really easy for them to recognize that this is a straight-over capital excise tax, rather than some kind of property tax. They don’t really have a reason to make a constitutional decision.”

Who’s paying this tax, and what’s their reaction?

An estimated 7,000 households — the wealthiest in the state — are estimated to be affected by the disputed law, according to Invest in WA Now. Roughly two-thirds of those households are in King County.

Sharon Chen, a former Microsoft employee currently on the board of Progress Alliance, is one of those 7,000. Last week she joined the Invest in WA Now panel of tax-reform proponents and made a case for why she thinks it’s only fair.

“My family is very fortunate, and we will pay this tax,” she said. “This tax, it just starts to address the income inequality in this state.”

But Mercier at the Center for Government Reform said he believes the tax poses a significant threat to Washington’s ability to attract business, and keep the state’s wealthiest residents.

“Even before the legislature passed this capital gains income tax, I was hearing from business owners in California considering relocating to Washington but concerned about what they were hearing,” Mercier said. “They told me Nevada and Texas were now safer bets. With the court hearing pending, I continue to hear from Washingtonians say the door being opened to an income tax will be the last straw.”

Nicholas, with the Washington State Budget and Policy Center, disagrees — especially when it comes to the idea of a mass exodus of wealthy Washingtonians.

“Research shows that taxes are just a very minor reason for people moving for any reason,” he said. “The real factors that drive interstate migration, which is pretty low overall anyway, are things like housing costs and the availability of good schools and parks and an environment — things that taxes actually pay for.”