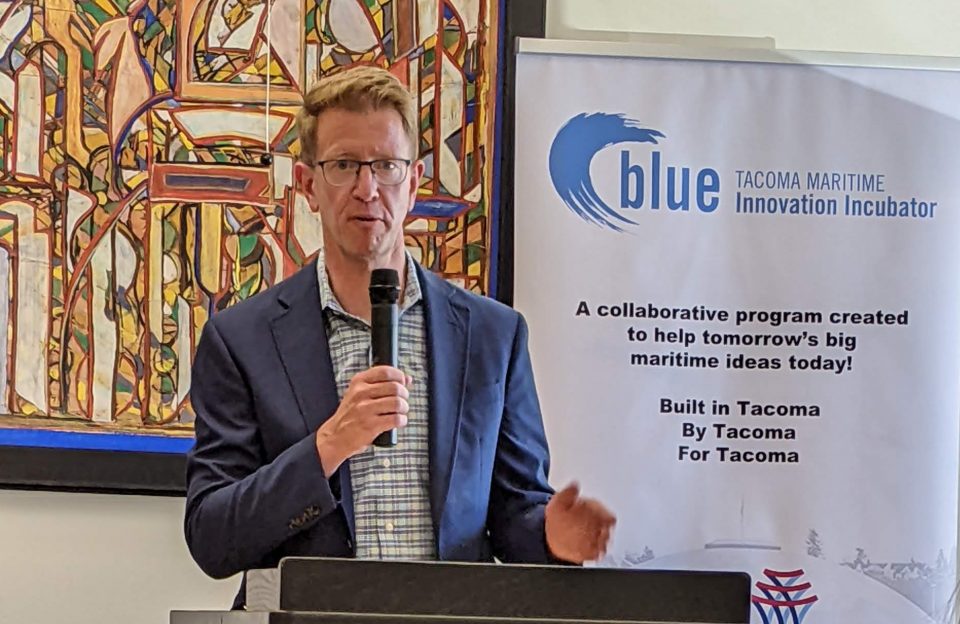 Rep. Derek Kilmer (D-Wash) was the featured speaker at an event in Tacoma, Wash., this week sponsored by Maritime Blue, a Washington state public-private coalition promoting marine-related technologies that runs an incubator in Tacoma.

Kilmer worked for a decade on the economic development board for Tacoma-Pierce County before running for office and has a staff member serving on the Tacoma Maritime Innovation Incubator steering committee. In 2019 he was appointed chair of the Select Committee on the Modernization of Congress, which is tasked with bringing Congress into the 21st Century.

Here’s a rundown of his comments at the event, hosted at the TractionSpace coworking offices in Tacoma. Answers were edited for brevity and clarity.

On the importance of innovative entrepreneurs

It’s important that everybody wrap our arms around innovative companies, innovative entrepreneurs, who are doing cool things here in our community. Now here’s why that’s important: If you look at the data around economic recovery, it’s not the big guys that are growing the jobs and pulling us out of economic challenges. It’s generally small businesses that are doing that important work.

I think of entrepreneurs like our star running back. They are the folks who are racking up the tough yards, that are scoring the touchdowns. And I think part of the role of the federal government, part of the role of local economic development folks and of city leadership and others, is to make sure that we’re doing some blocking for you and making sure that we’re handing you the ball. And at the very least, make sure we’re getting the heck out of your way so you can score those touchdowns that we need you to score.

On the blue economy

I came away from that, not to use another football analogy, and not to reference someone who no longer plays for our team, but as Russell Wilson said, “Why not us?” I think about the opportunities in the blue economy space and my reaction is, why not us? Why not see those opportunities happening here in Tacoma and here in our region? Part of the reason that I was supportive of the federal grant for the maritime incubator was because there is such opportunity here to promote opportunity in the energy-related space and the clean water space and the logistics space and maritime innovation.

On the importance of incubators

Why not us? Why not here? Part of the reason that I was supportive of this is the notion of supporting entrepreneurs with mentorship, and with space, and with access to funders and all of those important things that incubators do. That’s a no-brainer. We should be advocating that and frankly, the federal government ought to be supporting that work. So I think this is really a boon to our community and everybody who is participating in it. Everybody who’s supporting it or cheerleading it, thank you for that because I think it really, really matters.

On the CHIPS Act

Importantly, it also included a billion dollars for a program I wrote that’s focused on investing in communities, including in neighborhoods that have faced persistent economic challenges. If you look at the district I represent, there are a whole bunch of neighborhoods and communities that have faced persistent economic challenges.

On the Inflation Reduction Act

I’d be remiss if I didn’t mention the Inflation Reduction Act that passed on Friday, Obviously the main focus of that is on trying to reduce costs for the American people, and people will see an impact with regard to lowering healthcare premiums, prescription drug costs, and hopefully over time reduction in gas prices. But it also represents the most significant investment combating the climate crisis in history and it is really an example of the U.S. stepping up and trying to show leadership.

So part of the reason I mentioned this is when we had the visit from the secretary of energy, her focus is not just on big regulatory matters or things like that. She wants to make sure that we’re driving entrepreneurship in the climate space and seeing small businesses take advantage of some of these opportunities that will grow out of the passage of this new law. And I truly believe, when I share this with every one of you, every entrepreneur here with Maritime Blue, we will see opportunity out of this if we go after it.

On the importance of pulling together

I’m a big believer that the boat moves best when all oars are in the water rowing in the same direction. That’s a little bit different than in Congress where oftentimes the oars are out of the water with people actively beating each other over the head. But I think Tacoma shows what we can get done when we work together on things and this incubator is a terrific example of that.

We have a lot of amazing ingredients. We have a lot of smart people who live here, [but] a lot of them get on Interstate 5 every day and we’d love to have opportunities to not do that. I say that as someone who’s about to get on Interstate 5, unfortunately. So, the role of our of our colleges and universities is very significant in that regard. The role that Andrew Fry (director at University of Washington Tacoma’s school of engineering and technology) plays, and trying to facilitate industry connections between entrepreneurial people and entrepreneurial students and startups and those sorts of things, matter.

I actually think efforts like the incubator matter because it enables folks to start here, develop a network here and hopefully, grow and stay here.