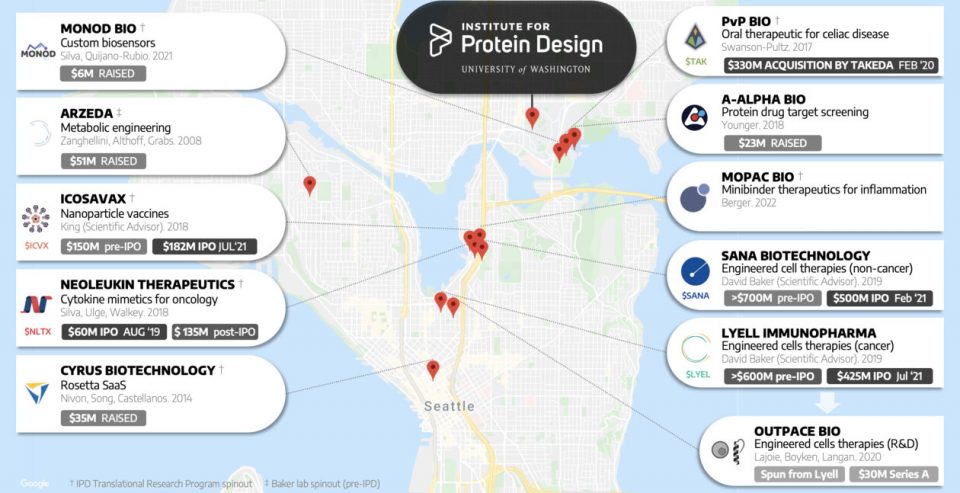 The Institute for Protein Design is an innovation factory.

Since launching a decade ago, the University of Washington institution has grown to about 200 researchers and spun out eight startups wielding protein-design software to forge new drugs, vaccines, and enzymes. IPD spinouts have collectively raised more than $1 billion and helped fuel a biotech boom in Seattle, where they have all landed.

IPD researchers also keep close ties to the institution after joining startups, forming a pool of advisors that nurture the next generation of companies within the bustling institution.

The IPD aims to fosters a culture of collaboration among its interdisciplinary mix of software engineers, drug development experts and other scientists, according to director David Baker, who won the prestigious “Breakthrough” award in the life sciences in 2021. His job, he said, is to bring the right people together and provide an environment for interaction.

“I just kind of stand back and let the magic happen,” said Baker.

It’s the human connections that foster entrepreneurship within an institution that has risen to the challenge of moving research beyond the ivory tower since its launch ten years ago.

“You’re surrounded by people who know some of the problems you’re running into,” said Anindya Roy, an IPD scientist and co-founder of Lila Biologics, an emerging spinout within the IPD. “You just go to them.”

Lila’s journey to nascent startup began several years ago as a research project.

Roy was designing proteins to target integrins, a family of molecules involved in a range of conditions.

Software advances within the last two years or so finally enabled a breakthrough. Roy successfully built a drug-like protein targeting an integrin involved in a deadly condition that scars the lungs, idiopathic pulmonary fibrosis.

Roy’s team found that the protein neutralizes the integrin in cells and counteracts disease in mouse models of the respiratory condition. The treatment is stable at room temperature and is delivered to the lungs via a nebulizer.

The researchers went on to design proteins to other integrins involved in cancer and metabolic disease. The proteins, called minibinders, are small, sleek and easily synthesized.

“With these really precise protein design methods you can now make compounds that can target many different members of the family,” said Baker of Roy’s research. “It just really wasn’t possible before.”

As Roy’s project matured, he moved into a separate arm of the IPD, its translational research program. That’s where IPD entrepreneurs go when they are ready to build a company.

Separating entrepreneurship into a distinct program takes the load off Baker and enables him and his team to focus on what they do best: basic research.

The translational program has its own head, Lance Stewart, and eases access to advice and funding. “It gives researchers a chance to feel some autonomy and their own personal responsibility, including fundraising of grants in their own lab space,” said Stewart. And that helps prepare scientists for the riskier task of launching a company.

Program advisors include Ingrid Swanson Pultz, co-founder of IPD spinout PvP Biologics, which was acquired by Takeda in 2020 for $330 million. Another is former PvP CEO Adam Simpson, now CEO of IPD vaccine spinout Icosavax. Both are part of Lila’s management team.

“There is an intoxicating culture here that creates so much energy, it’s a lot of smart people in one place,” said Jake Kraft, who is also a Lila co-founder, along with Xinru Wang and Hua Bai. “We are constantly encouraged to talk to each other and communicate and just bounce ideas off each other. David calls it the communal brain. That has been his philosophy and it works.”

Sources of seed funding include UW startup program WE-REACH and the nonprofit Washington Research Foundation, which together provided $640,000 for Lila.

Even IPD’s software is licensed with an eye to furthering innovation. The tools are available through the Rosetta Commons, which provides a mechanism for community-wide collaboration and access through 70 commercial and 30,000 academic licenses. The IPD also intentionally builds companies within Seattle, said Stewart, which helps build its network.

“I think part of what’s drawn people from all over the world here is the prospect of starting a company,” said Baker. “When those brilliant people come in, that leads to new scientific advances, which then enables new companies. It’s really a nice, feedback kind of thing.”

And there are more startups in the wings. “There are quite a few nascent companies in the works, in a very broad range of different areas,” said Baker.

Other IPD researchers in the translational program include George Ueda and James Lazarovits, who are engineering nanoparticles to regenerate blood vessels. Stephanie Berge recently fledged from the program: she co-founded Mopac Biologics, which is developing a minibinder treatment for inflammatory bowel disease, and is the company’s chief scientific officer.

A 5-year $45 million award from The Audacious Project at TED in 2019 also bolsters IPD’s science and helped it almost double in size.

The IPD’s emphasis on basic research seeds a lot of new ideas for companies. And the speed of innovation is accelerating, said Baker.

From software to startup

The IPD’s science is propelled by its software. And software is powering a shift in how new therapeutics are designed and developed.

This March, the IPD published a study showing how its Rosetta software could create drug-like “minibinders” like the ones made by Lila. A month later, the IPD showcased proteins that act like miniature axle and rotor assemblies.

Last December, the IPD was lauded by Science magazine with its “Breakthrough of the Year” award for 2021. IPD researcher Minkyung Baek and her colleagues helped crack open a long-standing challenge: predicting how a protein folds based on the sequence of its amino acid building blocks. The IPD took home the award with Alphabet’s DeepMind for its software tool that accomplished the task with speed and unprecedented accuracy.

The new tools are already being deployed by biopharma companies to help design potential drugs.

“The research is advancing at just an incredibly rapid pace now. It seems like every couple of months, we can do something that we couldn’t do before,” said Baker. “That’s opening really large numbers of new company opportunities. It’s a really exciting time.”

Just last week, a vaccine designed by IPD and other UW researchers won approval in South Korea. The vaccine, licensed to SK bioscience, is the first approved medicine based on computational protein design — a milestone that stands to increase the confidence of investors, said IPD researcher Neil King in a previous interview with GeekWire.

And investors are already bullish on the field. Last spring, computationally-driven biotech company Insitro landed $400 million in venture funding and Recursion pulled in $436 million in its IPO. In November, Alphabet spun out Isomorphic Labs to leverage DeepMind’s software for drug design.

In Seattle, it’s not just IPD spinouts that benefit from the advice and influence of the institution — other biotech companies harness its expertise.

All that has helped make Seattle area the eighth largest life sciences market in the U.S. and fueled a surge in life sciences employment. Soon, IPD may rack up another successful startup.

Roy and Kraft will shop Lila to venture firms this summer. They aim to convince investors that they have a potential treatment for respiratory disease and a platform to develop similar drug-like proteins down the line.

One day Lila’s founders may advise the next generation of entrepreneurs at IPD. Said Roy: “If we are successful, hopefully we can come back.”

See the list below for more info on IPD-linked spinouts, listed by date of launch.

Founded: 2008 (Founded with tech from the lab of director David Baker, prior to IPD’s formal launch)

Inside Arzeda’s synthetic biology lab, where industrial ingredients are brewed like beer

Why Electrification Is Fueling Dealer Adoption of Assisted Reality Tech