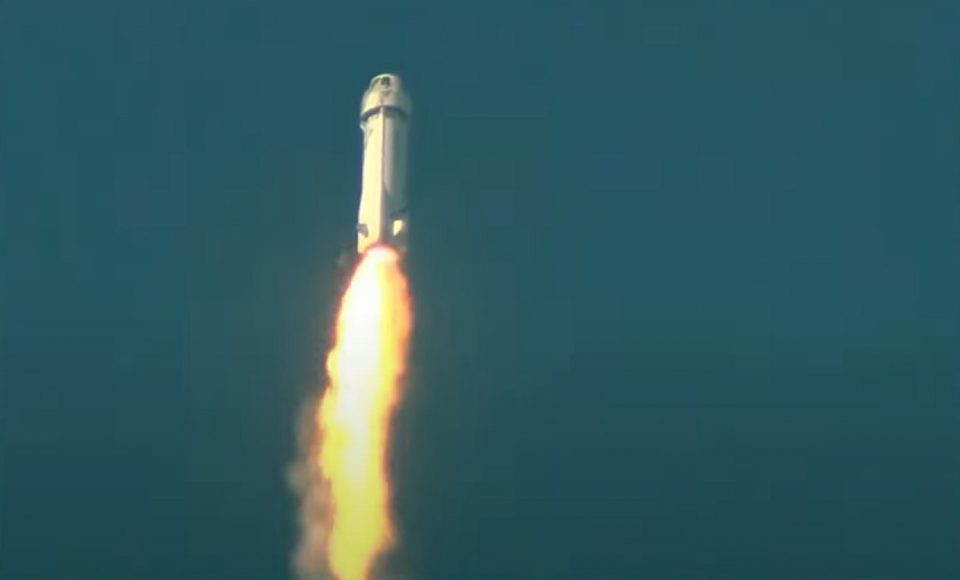 It was the first Blue Origin mission to fall short of its goal since the first flight of the company’s New Shepard suborbital spaceship in 2015. Blue Origin didn’t immediately report what caused today’s anomaly.

No people were aboard the spacecraft. Instead, this mission was dedicated to scientific payloads and STEM education. The New Shepard spaceship carried 36 payloads, half of which were funded by NASA, plus tens of thousands of postcards that were sent in by students and flown courtesy of Blue Origin’s educational foundation. the Club for the Future.

This was the first dedicated payload launch since August 2021, coming amid a string of six crewed suborbital flights that saw 31 customers and special guests (including Bezos himself) go to space and back.

Today’s flight from Blue Origin’s Launch Site One in West Texas started out following the same trajectory as the crewed missions. New Shepard’s hydrogen-fueled booster sent the capsule into a clear sky.

But at about the 27,000-foot level — just after the rocket experienced maximum dynamic pressure, or Max-Q — the booster flared with a bright flash. Then the capsule’s launch escape system kicked in, blasting the capsule further skyward while the burned-out booster fell away.

The capsule reached a maximum altitude of just a little more than 37,000 feet — far short of the target altitude of 62 miles (100 kilometers). It deployed its parachutes and made a safe landing amid the Texas rangeland.

“Safety is our highest value at Blue Origin,” Wagner said. “It’s why we built so much redundancy into the system.”

Today’s payloads included a NASA-funded experiment aimed at testing hydrogen fuel cell technologies that could be used to power rovers and equipment on the moon’s surface. Another experimental payload called ASSET-1 — which was built by Honeybee Robotics, a Blue Origin subsidiary — was meant to blaze a trail for studying soils on asteroids and other celestial bodies.

Still other experiments were designed to study how zero-G affects phenomena ranging from ultrasonic sound waves to non-toxic propellant production. Because the capsule didn’t follow its planned trajectory, today’s experiments will probably have to be reflown on a future research mission.

Two-thirds of the payloads flown today were provided by K-12 schools, universities and other organizations focused on science, technology, engineering and math education. That’s a new high for Blue Origin’s STEM research program.

Blue Origin plans to give a further boost to STEM education through a program announced last week in connection with a meeting of the National Space Council. The Space Days program, organized by the Club for the Future, will organize community events and film screenings across the country.

Bezos’ space company is also part of an industry coalition that will focus on meeting the rising demand for a skilled technical workforce in aerospace.

bitchy | Ellen Pompeo on season 19 of Greys: ‘I don’t deserve to be in every single episode’

Report calls for ‘mega-region’ to unite on climate as Cascadia leaders meet at U.S.-Canada border – GeekWire