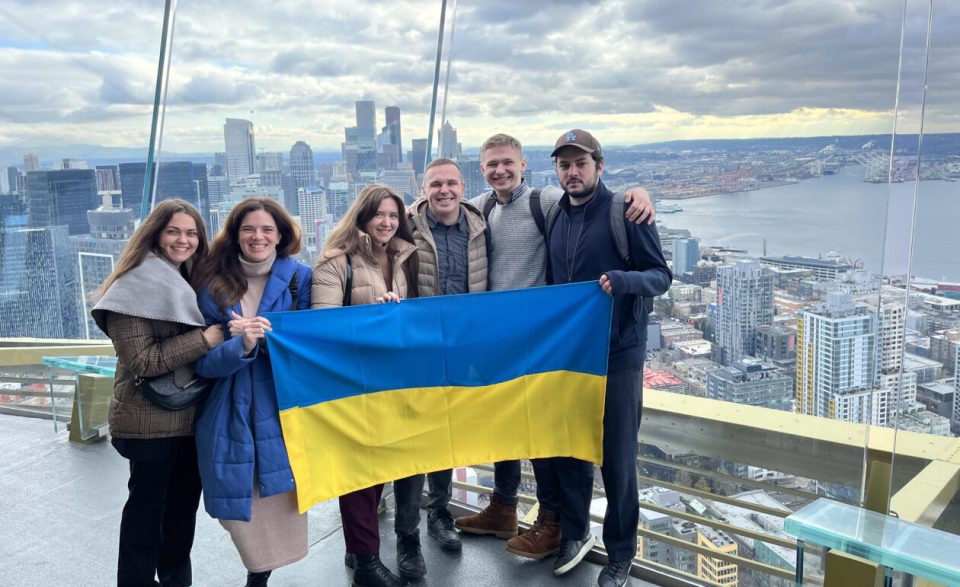 A delegation of Ukrainian health officials and policymakers is visiting Seattle to learn about the city’s life sciences cluster and develop relationships with its researchers and innovators.

The delegates are also thinking about ways of building up their country after the war. “Our work is for the future,” said delegate Igor Ivashchenko, policy and excellence lead in Ukraine for the biopharma giant Roche.

Ivashchenko and other delegates spoke with GeekWire at a life science networking event Wednesday at a pub in Seattle’s South Lake Union neighborhood.

Ukraine is known for its lively tech sector, but its infrastructure for life sciences research is not as fully developed. And its physician-scientists have been pulled away from research as the country’s hospitals fill with the wounded, said delegation coordinator Veronika Gryshchenko.

Still, the country is a destination for clinical trials. Ukrainian firms like Enamine, Life Chemicals, and OTAVAchemicals provide chemistry services and about 80% of the world’s compounds used for drug screening.

Delegates see Ukrainian tech expertise as a way to foster growth of the life sciences, given that big data and computational biology are increasingly central to the field. That makes Seattle, known for its tech-oriented life sciences projects and startups, a natural fit for the delegation.

Arman Kacharian, chief of the expert group on innovations for Ukraine’s Ministry of Health, envisions that Ukraine could become a bioinformatics and data sciences hub for biopharma companies.

Kacharian was inspired during a meeting at Fred Hutchinson Cancer Center by its approach to fostering spinouts. At the University of Washington’s Institute for Translational Health Sciences he learned about building cell and gene therapy facilities.

Delegates were also looking forward to meeting with groups like the trade association Life Science Washington, the City of Bothell, and institutions that have prior or ongoing collaborations with Ukraine. These include the Institute for Health Metrics and Evaluation and the UW’s International Training and Education Center for Health, which supports Ukraine in providing services for people with HIV.

Kacharian, a former oncologist, left medical practice to help improve Ukraine as a civil servant. “When you feel that you can lose your country, it’s very valuable for you and you want to develop it, you want to make it better,” said Kacharian.

The war has made everyone’s work harder, said the delegates, as they cope with interruptions like blackouts caused by Russian destruction of electricity infrastructure.

Delegate Inna Onyshchenko leads the centralized electronic healthcare record effort at the National Health Service of Ukraine, working with about 40 Ukrainian companies to improve the system and its connections to hospitals.

The system was transferred to the cloud early in the war and has been fully operational since, said Onyshchenko, crediting the savvy of her tech team. The database has also helped Ukrainians internally displaced by the war to access their records.

“We have to work harder, faster and more productively to make the victory closer,” said Onyshchenko.

The Seattle office of the nonprofit World Affairs Council is hosting the delegates as part of the Open World Program, established in 1999 by the U.S. Congress. The program was initially founded to conduct exchanges with former Eastern Bloc countries after the fall of the Soviet Union but has since expanded to other regions as well.

Open World has sent about 200 Ukrainian health delegates to other cities in the U.S. this year to learn about topics such as contingency and emergency planning, as Russia targets Ukrainian healthcare facilities. While health is a major focus this year, Open World’s Ukrainian groups also work on other issues such as de-mining Ukraine, large swaths of which are affected by Russian mines.

Ivashchenko said he was grateful for American support for Ukraine and inspired by the atmosphere of innovation in Seattle. “For the Ukrainian people, it’s very important to see the future, because I think our conflict with Russia is a conflict between the past and the future,” he said. “If a country is stuck in the past like Russia, it cannot achieve anything.”

Where do the delegates see Ukraine in five or ten years?

“I see a lot of investment. I see victory. And, I see a prosperous European country,” said Kacharian.

bitchy | Henry Cavill: ‘I will, after all, not be returning as Superman’