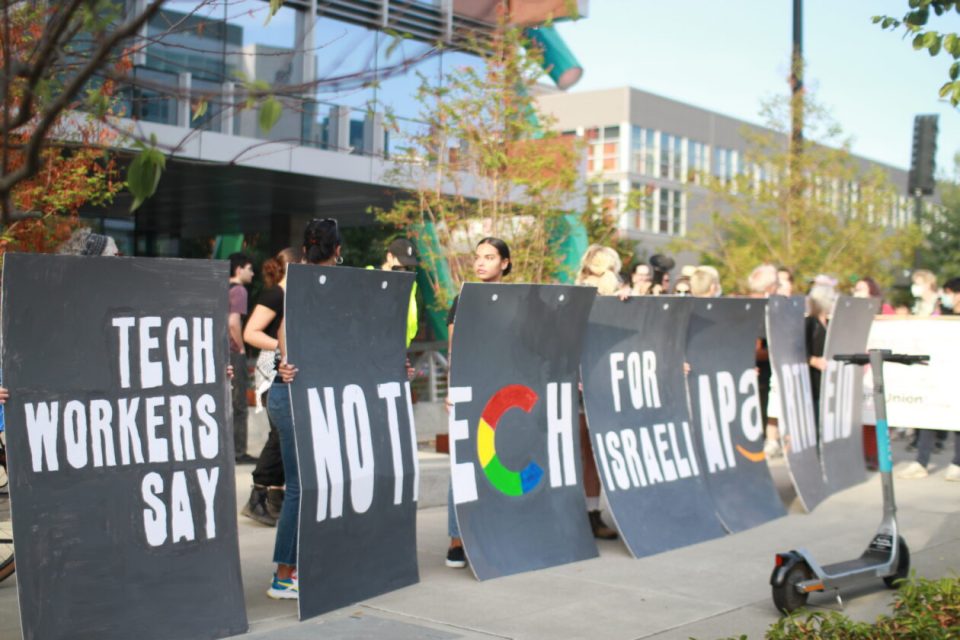 When the Supreme Court overturned Roe v. Wade earlier this year, tech leaders were thrust into a political debate, whether they wanted to be or not. Many companies such as Seattle’s Redfin changed policies to cover expenses for workers who travel across state lines for abortion care.

Some employees at Redfin applauded the decision. Others quit.

The response is emblematic of a new landscape that business and tech execs must navigate in a polarized country that will vote on its midterm elections Tuesday.

Gone are the days when companies were expected to remain politically neutral and narrowly focused on business operations.

But the playbook for managing these increasingly political workplaces remains largely unwritten.

Redfin is in a particularly tricky position because of the nature of its business. The Seattle-based company’s technology workers tend to be liberal and often expect the company to champion progressive causes. But Redfin also employs real estate agents across the country, many of whom lean conservative.

Redfin CEO Glenn Kelman tries to be inclusive of everyone in his politically diverse workplace. But in an interview with GeekWire he acknowledged, “sometimes you do have to make a controversial decision.”

The current political climate has many executives feeling stuck between a rock and a hard place. New generations of workers and customers expect more political engagement from their employers, but any position a CEO takes risks alienating some of them. At the same time, political neutrality in the age of polarization is often lambasted as spineless. Plus, large companies that aim for neutrality often become political punching bags in election cycles.

Why workplaces are becoming more political

For decades, corporations largely limited their political engagement to lobbying behind closed doors and speaking out about economic issues with a direct impact on business, such as taxes and minimum wage requirements.

The trend is driven, in part, by the expectations of employees and customers.

Customers and users sometimes join the fight, boycotting products in response to corporate political posturing. In surveys, consumers largely say they expect companies to play a role in political affairs. A 2019 survey by Global Strategy Group of more than 800 adults revealed 78% believe “our government is broken and corporations need to step up and help make positive changes in our society.” Of those surveyed, 80% said “corporations should take action to address important issues facing society.”

There are, however, big partisan splits over which issues people think companies should take up. Just 34% of Republicans said corporations should speak out regarding transgender rights, for example, compared to 65% of Democrats.

Therein lies the challenge for corporate leadership. Is it possible to respond to pressure to get political without alienating parts of your workforce and customer base?

Political agnosticism in the age of polarization

Some companies are responding to the current climate by enforcing political agnosticism, requiring employees and executives to remain neutral on hot button issues at work. But that approach comes with risks of its own.

In 2020, Coinbase CEO Brian Armstrong famously implemented a policy forbidding political debate and activism in the office, offering severance packages to employees who wouldn’t comply. About 60 employees, or 5% of Coinbase’s workforce, quit and the move received both praise and sharp criticism. Several of Armstrong’s peers spoke out about the policy, including former Twitter CEO Dick Costolo, who said, “me-first capitalists who think you can separate society from business are going to be the first people lined up against the wall and shot in the revolution.”

Kelman only takes public political positions when the issue is relevant to the company mission.

“Political leaders are trying to put businesses in positions where we have to be on one side of a debate or another and employees, especially younger employees have followed that lead,” said Kelman, CEO of Redfin since 2005.

Despite some companies’ efforts to remain politically neutral, CEO activism is on the rise, according to a review by Harvard researchers Aaron Chatterji and Michael Toffel.

“Smart CEO activists typically choose their issues; the issues do not choose them,” they wrote. “To avoid being blindsided by a news story or awkwardly weighing in on a topic they know little about, CEOs should sit down with their executive teams, including their chief communications officers, and decide what issues matter to them and why.”

But that advice does not address a key problem with CEO activism. The politics of the C-suite don’t always align with those of the employees.

A 2017 Stanford study of 600 tech companies found executives tend to be conservative when it comes to free markets, regulation, and unions, but liberal on issues like human rights. The New Republic calls this “the politics of Silicon Valley — a distinctive mix of liberalism and libertarianism.”

But the workers who comprise these companies tend to lean further to the left on a broader range of issues, which sometimes leads to clashes between employees and management.

Even if those clashes don’t occur, executives set the tone for a company. If a CEO is outspoken on one side of the political spectrum or the other, it can attract like-minded employees and discourage those with divergent views from joining a company.

Executives and employees — together or separate?

One possible remedy could be to bring employees into the process of corporate political activism. Employees could, for example, elect a committee to decide which issues and candidates leadership will publicly endorse. Or all employees could vote on how company dollars were spent.

Tom Freeman, a lifelong activist with the Democratic party and head of customer innovation at the data startup Rendered.ai, believes democratizing political speech in that way is the best path forward for tech leaders.

“We need a mechanism of developing a consensus within a company before taking a political position,” he said. Freeman later added, “I would argue that the future looks a lot more like a transparent process as opposed to one that was created in the backroom.”

It may be difficult to persuade executives that a more democratic political engagement process is the best path forward. Kelman warned that approach could create a “tyranny of the majority.”

“I think people should vote at the ballot box, not on company policy,” he said.

INRIX, the Seattle-area traffic analytics company, aims for political neutrality by hosting candidates from both sides of the aisle to speak to employees.

“At INRIX, we try to be a-political, and purposely do not get involved in political debates or take sides in particular issues,” CEO Bryan Mistele said in an email. “Our goal is to show respect for all our employees, who we recognize are all over the political spectrum and let them engage personally on issues that are important to them. Having said that, we will host national and statewide candidates who reach out to us and want to speak to our employees.”

Last month Mistele shared a photo on LinkedIn of himself and U.S. Senate candidate Tiffany Smiley at the company’s headquarters.

“She would bring a breath of fresh air to Washington, and I’m proud to support her,” Mistele wrote.

Mistele said the post was a personal statement separate from the company. “Everyone should be free to support causes and candidates from their personal social accounts without fear of being harassed or targeted,” he said. He added that the company has hosted “a variety of candidates over the years,” including Sen. Patty Murray — Smiley’s opponent — as well as former Gov. Christine Gregoire and Rep. Suzan DelBene.

Freeman, the tech worker and Democratic Party activist, commented on Mistele’s LinkedIn post and said it “looks like an INRIX endorsement” and “should be a big red flag for any auto or municipality thinking of engaging with INRIX.”

The post highlights a particular challenge for executives: exercising their right to political speech without implicating the companies they lead. It may not be possible, at least according to Chatterji and Toffel, the Harvard researchers who study the issue.

“Though CEOs first have to decide whether they’re speaking for themselves or their organizations, they should recognize that any statements they make will nonetheless be associated with their companies,” they wrote. “We have seen almost no CEOs successfully separate themselves from their firms in this way.”

How should tech leaders proceed in this political minefield? Most experts say with caution and a strategic approach. Chatterji and Toffel suggest defining a “compelling narrative for why this issue matters to this CEO of this business at this time” and making sure the message is “authentic to both the individual leader and the business.”