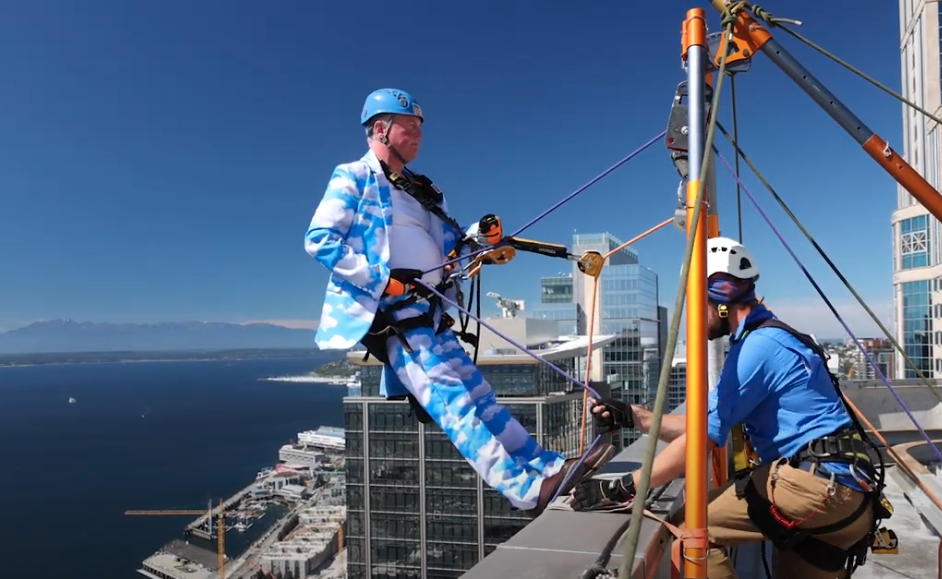 York Baur has already reached the top as CEO of MoxiWorks, a Seattle-based startup that operates a platform for real estate brokers. Last week he returned to the bottom — in unique fashion.

In a stunt aimed at celebrating his company’s charitable giving efforts, Baur paid up on a challenge he made to employees during a fundraising drive, in which they ultimately eclipsed a goal of $25,000 by raising another $7,000.

From the roof of 1000 Second Ave., where MoxiWorks has offices, Baur — clad in a cloud-patterned suit on a blue-sky day — rappelled 40 stories, or 500 feet, back to street level. Along the way, he passed waving and cheering employees who were safely behind glass on the 13th floor.

In a post on LinkedIn on Thursday, Baur said calling attention to the Moxi Fund charitable effort, where employees raise money to put back into housing-related charities, was the primary reason for the daredevil antics. But he said he also set out to overcome his natural fear, and challenge himself to grow by doing something he’d never done before.

“I strongly believe that fear is the enemy of growth and opportunity,” Baur wrote. “Is it uncomfortable to do this? … yes. But even the greatest fears can be overcome by preparation, coaching, data and teamwork.”

Watch the video of Baur’s stunt below: