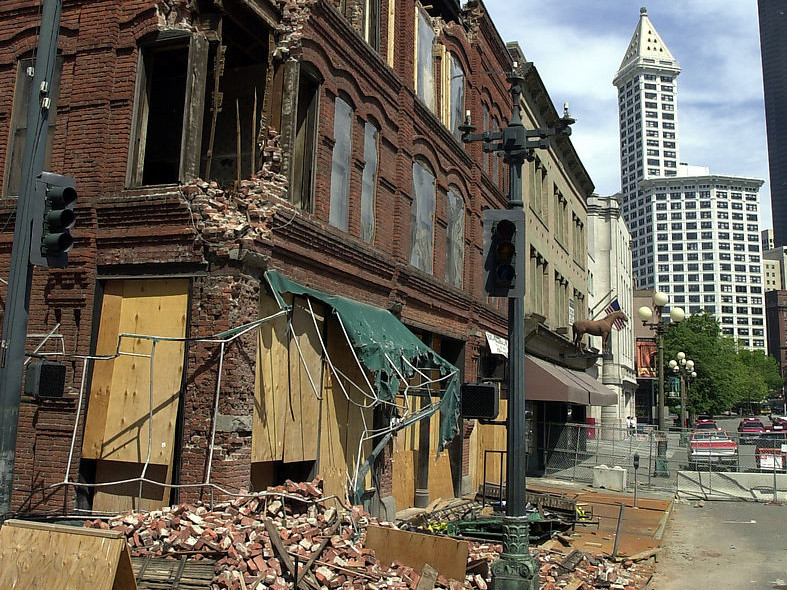 News this week that a big earthquake in Seattle could trigger destructive tsunami waves that would hit some shorelines in a matter of minutes left at least one GeekWire reader scratching their head. Does the new report mean that you should still follow the stop, drop and cover quake advice, or should you race to higher ground as soon as the earth starts moving?

The answer, said Washington State Department of Natural Resources spokesman Joe Smillie, is both. First you hunker down somewhere safe. When the ground stops moving, particularly if it’s a larger quake, head to higher ground and/or inland from the shoreline.

It’s a tricky situation, and as the reader noted, “official Seattle recommendations even say to resist the urge to run outside since people often get injured when trying to flee during an earthquake.”

In the region’s most recent large earthquake, the 2001 Nisqually quake, people were, in fact, hurt by bricks falling from building facades. The quake registered 6.8 magnitude. There was no tsunami.

RELATED: New tsunami warning to those in Seattle: If the earth starts shaking, get to higher ground ASAP

But that quake was caused by colliding plates in a different fault than was addressed in the new research from the Washington Geological Survey, a division of DNR.

The Nisqually quake occurred where the Juan de Fuca tectonic plate is descending beneath the North American plate and was centered some 32 miles underground. The new study focused on the Seattle Fault zone, a fault that runs east-west under Puget Sound. It stretches through the naval town of Bremerton, across Bainbridge Island, through Seattle and east past Bellevue.

The study predicted the impacts of a large but unlikely event: a 7.5 magnitude quake caused by the Seattle Fault. The researchers found evidence from geologic records and oral histories from indigenous people documenting a large quake on the fault some 1,100 years ago. The fault is still considered to be active.

The model for the Seattle Fault earthquake shows that some land masses would be shoved up higher, a phenomenon known as uplift, while others would be pushed lower or subside. The quake could generate giant waves, the largest topping out at 33 feet high that could hit Seattle’s Magnolia Bluff neighborhood.

In the midst of a quake, however, almost no one will know which fault is to blame and whether a tsunami is going to follow. Your best bet might be erring on the side of caution.

“The ground shaking will be your warning that a tsunami may be on the way,” said Maximilian Dixon, the hazards and outreach program supervisor for the Washington Emergency Management Division, in a statement. “Make sure you know where the closest high ground is and the quickest route to get there. Get signed up for tsunami and local alerts.”

bitchy | Prince Harry won his libel case against the Mail, the Mail’s claims were ‘defamatory’