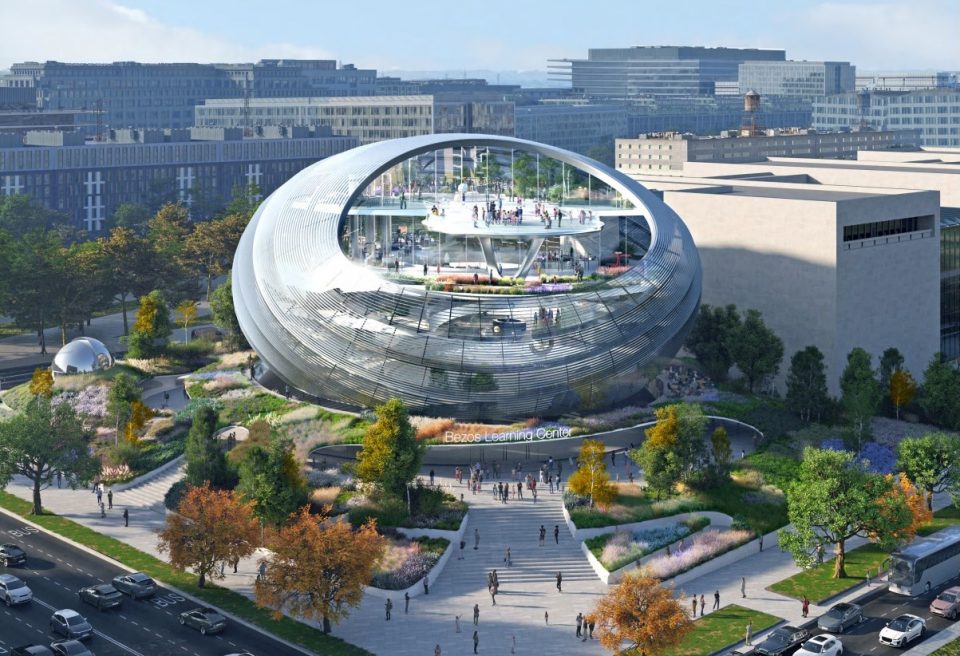 The design selection process for the Bezos Learning Center planned at the Smithsonian Institution’s National Air and Space Museum may sound a bit like “America’s Got Talent” for architects — but the $130 million prize is well beyond game-show proportions.

That’s how much money Amazon founder Jeff Bezos is giving to have the 50,000-square-foot center built as an addition to the museum on the National Mall in Washington, D.C. It’s part of Bezos’ record-setting $200 million donation for the NASM’s renovation, which was announced last summer.

The Bezos Learning Center would feature activities that inspire students to pursue innovation and explore careers in science, technology, engineering, arts and math — or STEAM, for short. The Smithsonian stressed that the center wouldn’t just focus on aerospace, but connect to all of the institution’s museums.

In January, the Smithsonian put out the call for design firms to submit proposals for the center, which would replace a pyramid-shaped restaurant that was built on the museum grounds in 1988 but ceased operation in 2017. Last week, museum planners unveiled five design proposals. The architects behind the proposals are identified only as Firm A, Firm B, Firm C, Firm D and Firm E.

Judging by the illustrations included in the proposals, there’s likely to be a prominent place in the learning center for artifacts associated with Blue Origin, Bezos’ space venture. Most of the concepts show off Blue Origin’s New Shepard spaceship, which began taking people on suborbital space trips last year.

Each concept picks up on a spacey theme: Firm A works in hexagonal shapes that evoke the International Space Station’s Cupola as well as the James Webb Space Telescope’s segmented mirror. Firm B’s concept has a swoopy look that suggests the prow of a ship (or the upward rise of a rocket). Firm C incorporates a UFO-like spaceship pod, while Firm D and Firm E go with astronomical motifs (a spiral galaxy for D, a nebula for E).

Like “America’s Got Talent,” the Smithsonian’s design competition provides an opportunity for the wider public to weigh in. The institution’s website offers a way for folks to review the anonymous firms’ proposals and provide feedback through Sept. 19. The winner could be selected by the end of the year — but don’t expect the decision to be made on the basis of write-in votes.

According to a schedule laid out last year, the design review process for the learning center will continue into next year. Construction is said to be set to begin in 2024, and completion of the center is targeted for 2026 — which will mark the 50th anniversary of the opening of the National Air and Space Museum at its current site.

bitchy | Princess Anne will be a ‘key confidante’ to her brother, King Charles III