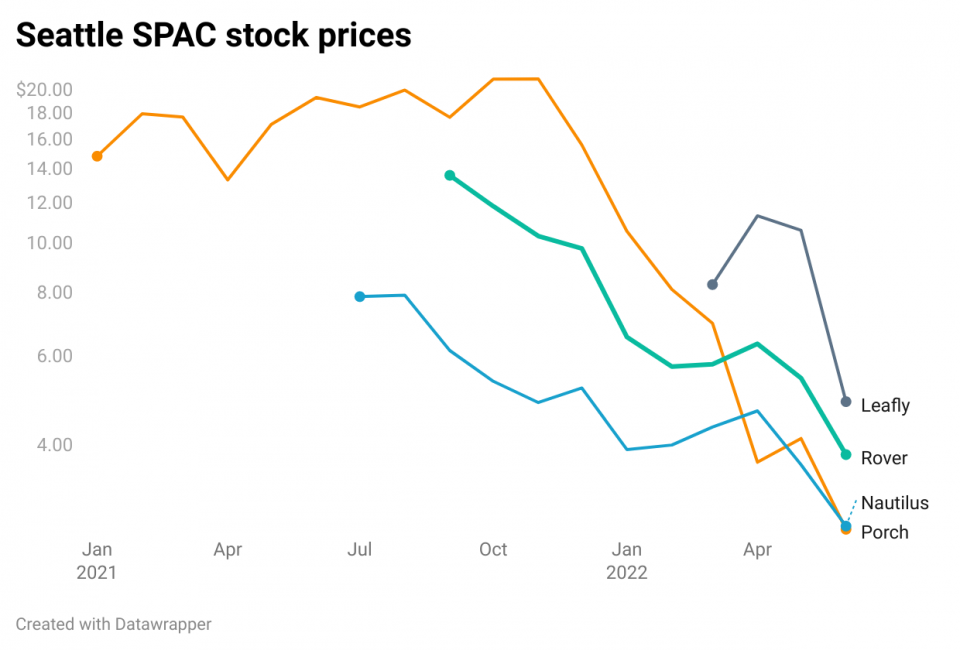 The four Seattle businesses that went public during the SPAC boom have sputtered amid the broader economic downturn.

Porch, Nautilus Biotechnology, Rover, and Leafly have all gone public via a special-purpose acquisition company within the last two years. But these companies, which vary widely in their respective industries, have seen their stock price drop by at least 50% from all-time highs.

So-called SPACs are firms formed with the intent of acquiring a private company in order to take it public. Many venture capitalists and hedge fund managers embraced this investment vehicle as a way to make relatively quick returns, taking advantage of low interest rates.

The Seattle companies were among a large cohort of businesses to ride investor euphoria toward SPACs during late 2020 through 2021. Nearly 60% of all listings were via a SPAC merger last year.

However, with rising interest rates brought on by inflation, the SPAC market has started to quickly decelerate. Confidence from investors has been eroding, said Cameron Stanfill, a venture analyst at PitchBook. He added that investors are concerned by the fact that SPACs have significantly underperformed compared to the S&P 500.

A list of companies that went public via SPAC lost more than double that of the S&P 500’s 2022 decline, according to CNBC.

There has also been a steady flow of proposed merger plans getting scrapped prematurely, with a total of 19 canceled deals so far this year. SeatGeek and Forbes are notable examples. Some firms that were seeking a company to acquire have liquidated and returned capital to shareholders before ever striking a deal.

Stanfill said that these factors working in unison are why he is predicting that SPAC activity will severely decelerate well into next year.

(Use the interactive graph below to track the stock prices of the four companies since they went public.)

Despite this, some firms have remained bullish on SPACs. For example Cascadia Capital, a Seattle investment bank, last year raised $150 million for a SPAC deal and said recently it still plans to acquire a company in the robotics or AI industry.

There are nearly 600 SPACs looking for an acquisition target this year, according to SPAC research.

Many SPACs are growth companies, often with some form of tech component. These companies usually have little to no revenue when they go public, using some form of forward-looking projections as a basis for its valuation multiple. Interest rates are factored into valuation equations, and the higher they go, the lower the valuations are for these companies. Because of this, many investors have avoided growth stocks, instead parking their capital into safer bets, Stanfill said.

The four Seattle companies, listed below, provide a window into how the broader market is treating these sorts of companies.

The stock performance: Porch, a Seattle-based home services platform, closed trading on Monday at $2.73, down nearly 90% from a previous high closing price of $25.66 in mid-November.

The SPAC deal: The company went public on the Nasdaq in late December 2020. It merged with PropTech Acquisition Corp., a publicly-traded SPAC, along with a private investment from Wellington Management Company, using the symbol PRCH. The merger was announced in late July 2020, with a valuation at the time of $523 million.

The stock performance: Nautilus Biotechnology, a Seattle-based company developing a new way to analyze the proteome, closed trading on Monday at $2.77, down nearly 73% from a previous high closing price of $10.10 in July.

The SPAC deal: The company went public on the Nasdaq in June 2021. It merged with Arya Sciences Acquisition Corp. III, a publicly-traded SPAC sponsored by Perceptive Advisors, using the symbol NAUT. The merger was announced in February 2021, with a valuation at the time of $1.3 billion.

The stock performance: Rover, a Seattle-based online pet care platform, closed trading on Monday near an all-time low, with shares at $3.83. The company is down nearly 74% from a previous high closing price of $14.68 in late September.

The SPAC deal: The company went public on the Nasdaq in early August. It merged with Nebula Caravel Acquisition Corp, a SPAC sponsored by True Wind Capital, using the ticker symbol ROVR. The merger was announced in February 2021, with a valuation at the time of $1.35 billion.

The stock performance: Leafly, a Seattle-based online cannabis marketplace, closed on Monday trading at $4.87 per share, down more than 57% from a previous high closing price of $11.34 in early May.

The SPAC deal: The company went public on the Nasdaq in early February. It merged with Merida Merger Corp., a SPAC sponsored by Merida Capital Holdings., using the ticker symbol LFLY. The merger was announced in August, with a valuation at the time of $385 million.