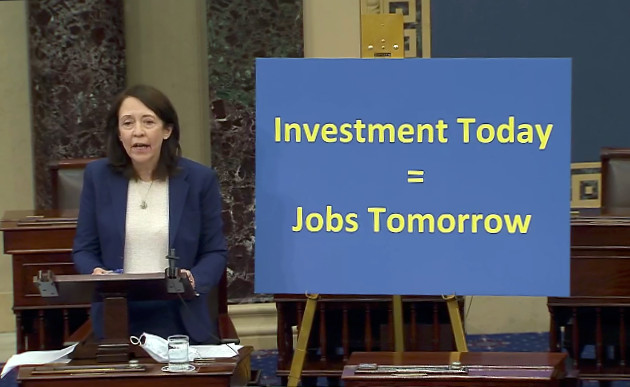 The U.S. Senate on Wednesday approved the Chips and Science Act, a bill authorizing nearly $250 billion of spending to bolster innovation and tech hubs in America, including support for basic research and strengthening the manufacturing of semiconductor chips.

Lawmakers deemed it a historic investment in technology and job creation.

The legislation, which runs more than 1,000 pages, passed with a vote of 64-33. It is expected to be approved by the House by the end of the week, just ahead of the August recess.

“We can’t ignore that chip production has gone overseas and that the United States has lost its share of that production,” said Cantwell, who is chair of the Committee on Commerce, Science and Transportation.

She noted that chip shortages caused a loss of $240 billion to the U.S. economy over the last year and that the country makes roughly 12% of the world’s supply of the chips, which are essential to the production of vehicles and wide-ranging electronics. When the percentage gets too low, Cantwell said, the manufacturing ecosystem is lost.

President Biden echoed some of those thoughts.

“We used to make these chips. We don’t make many of them anymore. The investment now in building more factories to make these chips is going to bring down the price of everything from automobiles to everything across the board,” Biden said via a Twitter video. “But more importantly it’s going to create thousands of good paying jobs.”

Pursuit of the legislation was thrown off course earlier this month by Senate Minority Leader Mitch McConnell, according to reporting by Roll Call. Lawmakers backing the act were able to resume their efforts, spurred in part by a classified briefing for senators warning that the U.S. was losing its competitive edge to foreign tech ventures.

“This is one of the most significant long-term thinking bills we’ve passed in a very long time,” said Senate Majority Leader Charles Schumer following the vote.

“Our grandchildren will hold good paying jobs in industries we can’t even imagine because of what we are doing right now and we did it together, both sides cooperating in good faith, on some truly difficult issues,” Schumer said.

Editor’s note: This is breaking news and will be updated as needed.

Without Meaningful Use, LTPAC Risks Falling Further Behind On Necessary Innovation