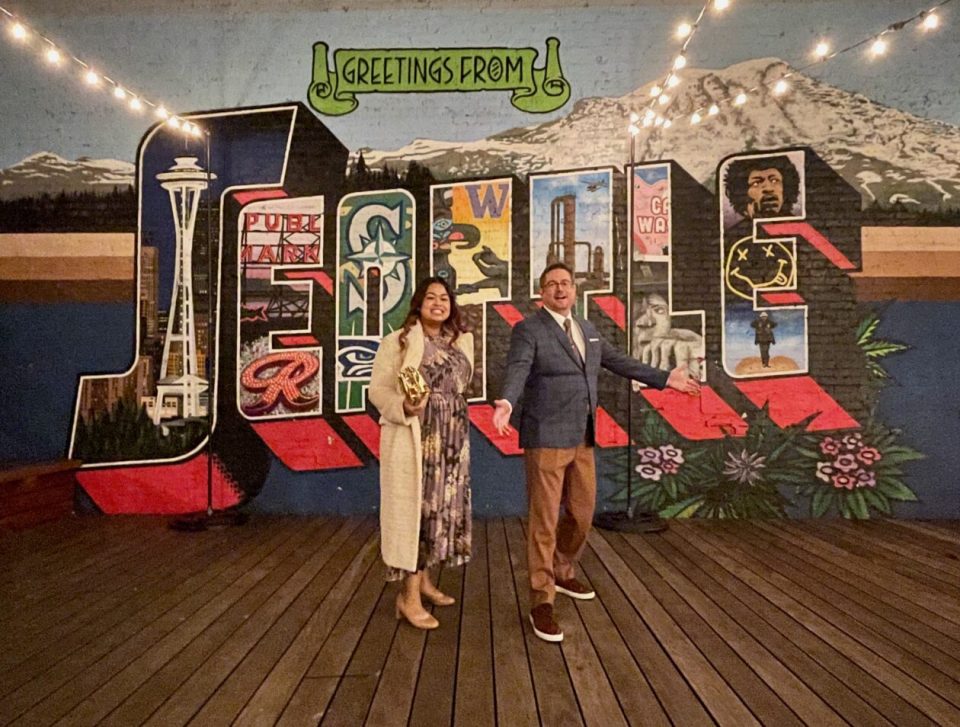 Two geeks definitely stepped out in style in Seattle on Wednesday night.

Karina Martija-Harris and Brian Crouch, winners of this year’s Geek Style Reboot, attended the GeekWire Gala feeling refreshed and looking great after spending the day at Nordstrom getting pampered, made over and dressed up.

PREVIOUSLY: Meet the two hard-working techies getting a ‘Geek Style Reboot’ ahead of the GeekWire Gala

Martija-Harris, a program manager at the Tacoma, Wash., incubator of Maritime Blue, was glowing as she emerged from an hour-long facial at the Nordstrom spa. Her day at the store was also filled with lunch at Nordstrom Cafe, a style consultation, a hair blowout at nearby Swink Style Bar and full makeup with a Nordstrom beauty stylist.

Crouch, a technical SEO manager at tax compliance software startup Avalara, also got a facial, as well as a pedicure, a style consultation and help with his skin-care routine.

The two emerged from Nordstrom dressing rooms dressed for success before heading to GeekWire’s annual holiday party at Block 41 in nearby Belltown, where they were greeted with cheers from the crowd of fellow techies.

“Overall, it was a fantastic experience,” Martija-Harris said. “All of the Nordstrom employees really did go out of their way to make sure all of my needs were taken care of!”

A big Seattle Sounders fan who is usually very comfortable in sweatshirts and pajama bottoms, she said she was feeling “very inspired to take on the new year in tech, and will use the outfit as a building block to help me create more great looks in future.”

Crouch, a self-deprecating techie who spends his day in front of a computer, joked throughout the experience about his approach to fashion and self care. He was clearly impressed by the attention he received.

“The time at Nordstrom was an eye-opener for me,” he said. “The folks I encountered had real hearts for the customer experience.”

Crouch said he felt as if he had been “gift wrapped” by the spa, beauty and style professionals for his special night out.

“When I’m with my wife, everyone’s looking at her,” Crouch said. But at the Gala, all eyes were on him, including those of his wife, Gretchen Crouch.

“He looks smart. He looks like himself but dressed up,” Gretchen said. “The plaid jacket is a departure but it totally fits him. He likes to look professional, so this is a good thing for him.”

Keep scrolling for more photos from Karina and Brian’s day:

Most popular stories on GeekWire for the week of Sept. 25, 2022 – GeekWire

Most popular stories on GeekWire for the week of July 10, 2022 – GeekWire