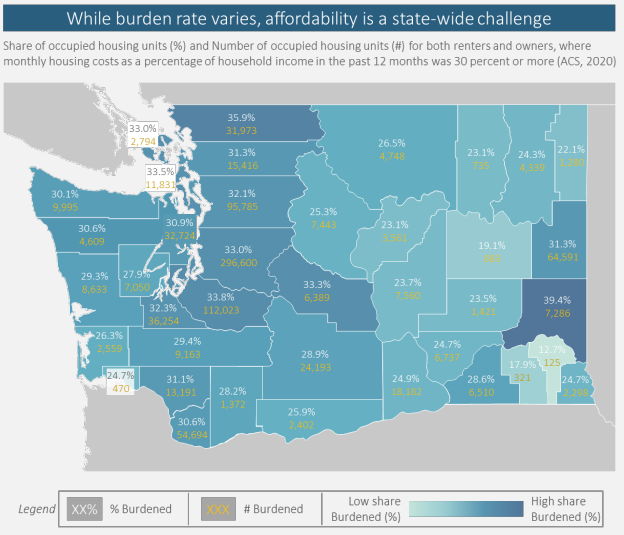 A new report commissioned by Challenge Seattle, a coalition of business and tech leaders, says more companies need to help finance and build affordable housing as part of a comprehensive solution to the state’s housing crisis.

“Large private companies based in areas with high housing costs have an interest in their workforce’s housing availability and costs, and therefore have a strong reason to be part of the solution,” the report says.

That’s one of the takeaways from the 125-page report, “The Conspicuous Crisis: Addressing Housing Affordability in Washington,” released Thursday morning, produced by the Boston Consulting Group for Challenge Seattle.

It’s a follow-up to a widely cited BCG report in 2019 that laid the groundwork for Microsoft, Amazon, and others to commit hundreds of millions of dollars to finance affordable housing in the Seattle region. Apple, Google, and others have likewise launched their own commitments and initiatives in California.

The new report acknowledges those efforts, in addition to new state laws and local policies addressing housing affordability and homelessness.

However, the report says the problem is outpacing efforts to solve it, with a disproportionate impact on people of color, compounding the history of racial discrimination in home ownership.

“Given that these initiatives were all implemented recently, it is too early to definitively state their impacts on housing affordability,” writes Challenge Seattle in an introduction to the report. “But we do know that based on the magnitude of the crisis, these actions alone will not be sufficient to address the challenge we face.”

The new report expands on the 2019 study by taking a statewide approach — finding, for example, that nearly 1 million Washington state households spend more than 30% of household income on housing related costs.

Increasing the role of private companies is one of 19 recommendations in the report to boost the housing supply and make housing more affordable and accessible to middle- and low-income households.

But the biggest focus is on increasing residential density through zoning reform. The report notes, for example, that more than 90% of Mercer Island and more than 70% of Seattle and Bellevue are zoned for single-family homes.

“Zoning reform is the critical enabler for removing regulatory barriers standing in the way of the private market producing more housing units,” writes Challenge Seattle. “In the context of Washington, we would need to change zoning laws to allow for more density and re-zone more land for multi-family residential uses.”