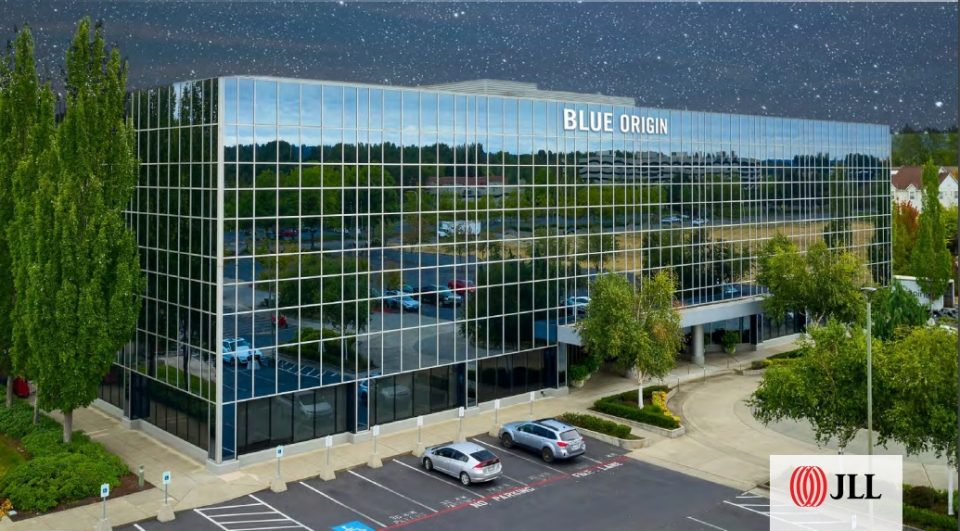 The workforce at Blue Origin, Amazon founder Jeff Bezos’ space venture, has been growing by leaps and bounds — and so has the need for office and lab space.

A memo laying out a real-estate sales offering suggests that Renton, Wash., the Seattle suburb right next door to Blue Origin’s headquarters in Kent, is a prime destination for many of the company’s 3,000-plus employees in the area. The memo was issued last month by Jones Lang LaSalle, the sales adviser for the sellers, and was brought to light this week by the Puget Sound Business Journal.

We’ve reached out to Blue Origin and JLL about the memo, and will update this report with anything we hear back.

The focus of the offering is The Landmark, a Renton office complex that’s up for sale at a price that hasn’t been publicly disclosed. The property, with 274,931 square feet of rentable space, had been purchased by California-based Redwood-Kairos Real Estate Partners in 2015 for $45 million.

According to the memo, Blue Origin occupies 83% of the space in two Landmark buildings, at 1600 Lind Ave. SW and 1600 E. Valley Road. Tyler Technologies, a Texas-based company specializing in public-sector software, takes up another 13%.

“Since Blue Origin signed their initial lease in July 2021 for 92,834 square feet, they have taken every available space and negotiated tenant relocations (Wizards of the Coast) to allow for a 227,033 square-foot footprint today (more than doubling in size in less than a year),” JLL said.

The memo touts Blue Origin’s New Shepard suborbital space program, which has sent up 31 paying spacefliers over the course of the past 15 months (but is currently grounded). Blue Origin is also working on an orbital-class New Glenn rocket that will be powered by the company’s heavyweight BE-4 engines, as well as the Orbital Reef commercial space station and other space projects.

“Blue Origin has been awarded $479.7 million in contracts, and has access to an estimated $10.2 billion in future potential awards,” JLL said.

The memo says Blue Origin could take full occupancy of Landmark office space within the next five and a half years. There’s also an option for building additional facilities at the site for further expansion. “JLL estimates that the site at minimum can accommodate 308,000 square feet of additional commercial space in a 14-story building,” the memo says.

The Landmark is by no means the only home for Blue Origin’s employees: Across the street from that complex, Blue Origin has been upgrading an existing warehouse building for use as a 49,688-square-foot research and development lab.

In 2020, the company moved into a new headquarters building in Kent, known as the O’Neill Building in honor of the late Princeton physicist Gerard O’Neill, one of Bezos’ mentors. Most of the production facilities for the New Shepard program are just across the street from the HQ, on a Blue Origin campus that dates back to 2006.

Blue Origin also has a significant presence in Florida, where its New Glenn rocket will be built and launched; in Alabama, where the BE-4 rocket engines will be produced; and in Texas, the home of its New Shepard suborbital launch site and its engine testing facility. But JLL’s memo makes it sound as if the company’s center of gravity will remain less than an hour’s drive south of Seattle (on a good traffic day, that is).

Go inside Group14, the $3B startup with a secret tech for better batteries – GeekWire