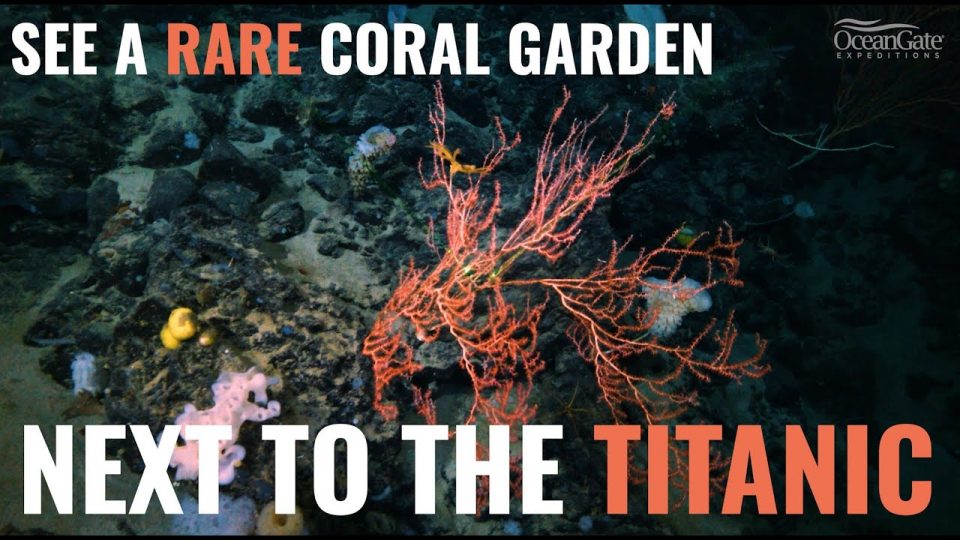 During an expedition to the Titanic back in 1996, submersible pilot PH Nargeolet noticed a curious sonar blip that was coming from a site near the wreck. Was it a previously undetected piece of wreckage? An unexplored geological feature?

Twenty-six years ago, the pilot wasn’t in a position to investigate further. But now a totally different Titanic expedition has solved the mystery, with Nargeolet serving as part of the team.

Data collected during this summer’s dives by Everett, Wash.-based OceanGate and Bahamas-based OceanGate Expeditions — plus the scientific analysis supported by the nonprofit OceanGate Foundation — reveal that the blip came from a volcanic ridge that serves as a home for corals, sponges and other denizens of the deep sea.

“On the sonar, this could have been any number of things, including the potential of it being another shipwreck,” Nargeolet said today in a news release. “I’ve been seeking the chance to explore this large object that appeared on sonar so long ago. It was amazing to explore this area and find this fascinating volcanic formation teeming with so much life.”

The 9,500-foot-deep, 330-foot-long basalt formation has been provisionally named Nargeolet-Fanning Ridge. That name recognizes the roles played by Nargeolet and by Oisin Fanning, an Irish energy industry executive who served as a mission specialist on this year’s OceanGate expedition.

“When I learned about the possibility of a dive to uncover the mystery of what was seen on sonar … I knew I wanted to be a part of the effort,” said Fanning, who paid to participate in the expedition. “It is a privilege to get to work with OceanGate Expeditions, OceanGate Foundation and the scientific team to better understand what lies deep below the surface of our oceans.”

This summer marked the second research season for OceanGate Expeditions and its scientific team. Last year’s dives in OceanGate’s Titan submersible focused on documenting the state of the 110-year-old Titanic shipwreck, left behind by one of history’s most famous tragedies at sea. This year, scientists continued their study of the wreck, but also took on the task of cataloging the surrounding sea life.

Finding Nargeolet-Fanning Ridge was one of the highlights of this year’s research season, according to Steve Ross, OceanGate Expeditions’ chief scientist.

“This discovery will improve the way we think about biodiversity of the abyss,” said Ross, who is a research professor at the Center for Marine Science at the University of North Carolina at Wilmington. “The apparently basalt volcanic formations are remarkable, and we are astonished at the diversity and density of the sponges, bamboo corals, other cold-water corals, squat lobsters and fishes that are thriving at 2,900 meters deep in the North Atlantic Ocean.”

Ross said the ridge should provide new data points in the study of deep-sea ecosystems. “The variety of life forms, concentration of life and the overall ecosystems may differ between the deep artificial reef of the Titanic and this newly revealed natural deep-ocean reef,” he noted.

Click through OceanGate’s images from the submersible and the seafloor:

Murray Roberts, a marine biologist at the University of Edinburgh who’s also part of the OceanGate team, said he and his colleagues will analyze photos and videos as well as DNA extracted from water samples collected at the reef.

“Scientists have always been surprised about how far sponges and corals spread across the ocean,” Roberts said. “We’re running computer simulations to understand this better, and I expect these unexplored rocky areas are critical in explaining how these animals can disperse across the vast distances of the deep muddy seafloor.”

The results will be shared with the scientific community and policymakers “to be sure these vulnerable ecosystems get the proper attention and protection they deserve,” Roberts said. Data generated by the Titanic studies will be shared openly with other researchers and the general public via the iAtlantic database.

OceanGate Expeditions is already planning next year’s return to the Titanic site — with spots available for mission specialists who can participate in the adventure for a fee of $250,000. The company also offers submersible dives to the “Tongue of the Ocean” in the Great Bahama Bank and to hydrothermal vents in the Azores.