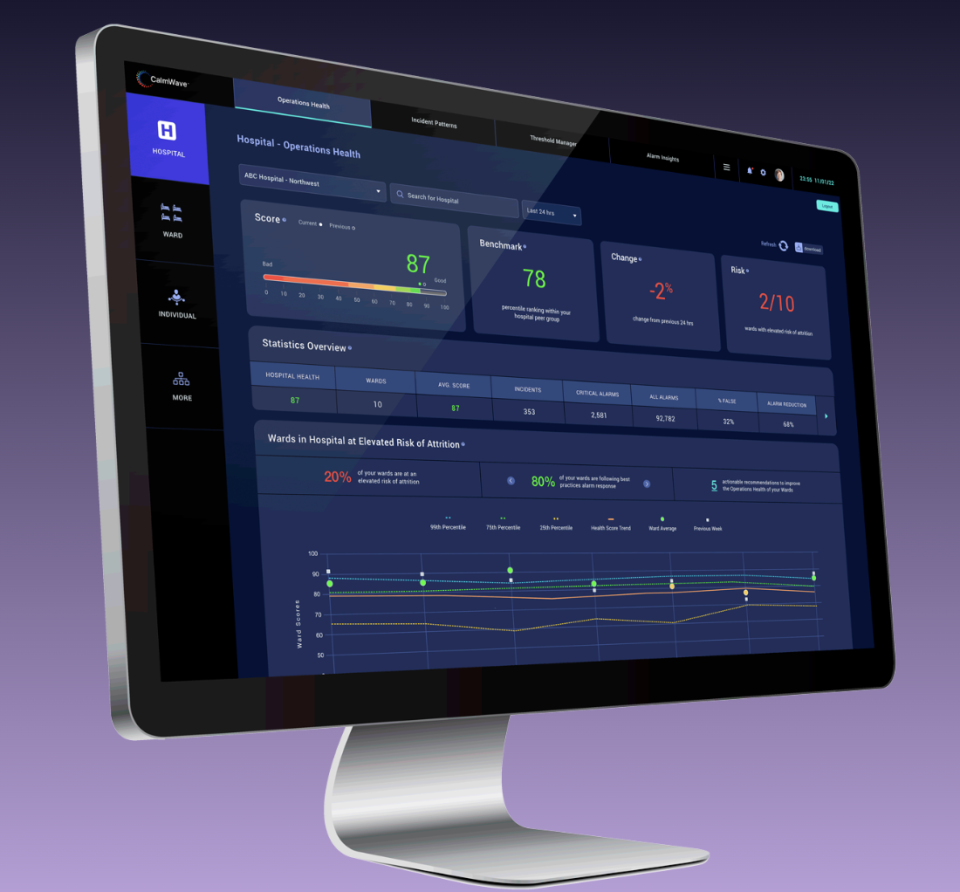 A new startup out of the Allen Institute for Artificial Intelligence (AI2) Incubator raised $4 million to reduce alarms from devices attached to patients in the ICU.

CalmWave went from inception to funding in five months, the fastest for any company spun out of the AI2 Incubator in Seattle. The incubator participated in the seed funding round, along with Tau Ventures, Seachange Ventures, Hike Ventures and the co-founders of PagerDuty. Bonfire Ventures led the funding round.

The serial entrepreneur founded Event Enrichment HQ, a Seattle startup that helped companies respond to IT-related events. In 2015 that startup was acquired by service reliability giant PagerDuty, where Ronen worked on a system that helped reduce alarms and worker alarm fatigue.

Ronen left PagerDuty in 2020 for a two-year sabbatical, spending time on his property in Eastern Washington. He also served as a search and rescue volunteer, where he met physicians who told him about the problem of alarm fatigue among healthcare workers.

“I started digging into lots of academic papers and learned that this is a huge problem,” Ronen told GeekWire. “And so, I wanted to fix it.”

According researchers, 85-to-99% of alarms from devices ranging from respirators to injection pumps are false or clinically insignificant. One study found that reacting to alarms takes up 35% of a nurse’s time in the ICU, and they may be exposed to as many as 1,000 alarms per shift. It contributes to nurse burnout and can also even contribute to injury or death in patients.

Solving alarm fatigue is also personal for Ronen. His father-in-law, who recently passed away, recorded a message for him in the ICU with constant beeps in the background, and noted that he was having trouble resting after a major surgery with all the noise.

“What other industry would be able to maintain that status quo of all this incredible cacophony?” Ronen said. “It’s just dramatically negatively impacting clinicians, patients and caregivers, and that’s not okay.”

Ronen brings deep entrepreneurial experience to CalmWave. He was a co-founder of Seattle’s InterNAP Network Services, which offered high-speed internet connections and raised $190 million in its IPO in 1999. He later founded two biodiesel companies and served in leadership roles at Seattle-area software and IT companies before founding Event Enrichment HQ.

After his sabbatical, Ronen became an entrepreneur in residence at the AI2, where he met co-founder and CalmWave chief operating officer David Garner. Garner has served in commercial and engineering leadership roles at healthcare companies for more than 20 years, including Philips Healthcare, Verathon, and Butterfly Network.

Said Ronen: “I heard from one investor who said, ‘Ophir, you know you are lab grown to solve this problem.’”

CalmWave collects data from the devices connected to each patient and provides a variety of ways to visualize it. Users can see individual patient views, summary views of all patients in a ward, alarm incidents, and more.

The system can suggest customized thresholds for each patient’s physiology. For instance, if a patient is a smoker with a low baseline oxygen saturation reading, it can suggest setting the threshold lower for an alarm from a pulse oximeter. The system uses AI to assess a patient’s data, learn from it about their physiological state, and provide suggestions for alarm thresholds.

CalmWave itself does not control the devices or the alarms but aims to provide users with transparent data so they can understand the basis for the suggestions. Its interface also provides clear instructions to healthcare workers about how to change settings. “We’re synthesizing massive amounts of data and showing them ‘here’s how we came to this recommendation. And here’s how you implement it,’” said Ronen.

The system will provide a comprehensive score of each patient’s condition and a platform to orchestrate staff workloads based on patient needs and alarm volume. CalmWave is currently lining up healthcare partners.

Computers can process a lot of data at once from alarm systems. “But as a clinician, if you’re looking at rows and rows of alarms that are interleaved and you’re trying to figure out what is most important, that’s really hard to do,” said Ronen. “And that is the same problem we had in enterprise IT.”

Ultimately, the company aims to reduce false positive alarms with no false negatives and promote the retention of healthcare workers by assuaging alarm fatigue.

Said Ronen: “The idea is let’s remove all of this cacophony, increase the actionable alarms, and then use the ingestion of all of that data to build operations health for hospitals, where now administrators can get a better understanding of the workload on our nurses and doctors.” CalmWave is currently lining up healthcare partners.

As the company ingests and processes de-identified data across multiple health systems, Ronen anticipates that it will also take on the capability of predicting patient outcomes. It also has an eye on creating transparency into its processes and avoiding catastrophic mistakes.

Ronen’s network engineering background has taught him to guard against failure. “We’re building the core of our platform with that thought process in mind,” said Ronen.

CalmWave now has six employees with additional contractors and advisors. The company plans to recruit more talent for its hybrid remote and in-person office near Gas Works Park in Seattle.