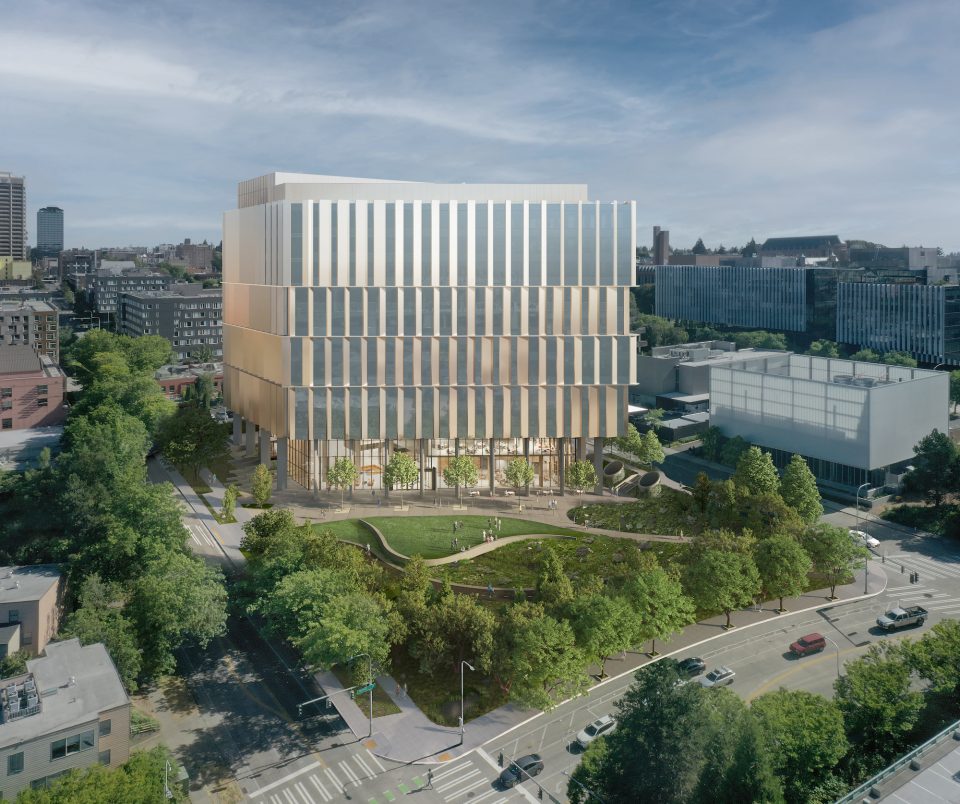 Newly released renderings show a building planned for the west campus of the University of Washington in Seattle that will be home to research centers in clean energy, medical science and more.

The project, previously announced in March and currently known as W27, is envisioned as a gateway into the recently named Portage Bay Crossing. The UW refers to this area as “a dynamic and interdisciplinary urban community” that will “merge education and student life with cutting-edge research, pioneering public/nonprofit institutions and private companies.”

The 340,000-square-foot, 11-story building will be located at 3919 University Way N.E.. The UW said it will be home to both academic and private research laboratories and offices, the Washington Clean Energy Testbeds, a rooftop solar panel testing area, the Institute for Protein Design and the Brotman Baty Institute. It was also house Connect Labs by Wexford Science + Technology, the developer on the project.

“The dynamic environment in this new space will unleash Washington students, faculty and companies to create home-grown technologies that can scale solutions to address the climate crisis,” Daniel Schwartz, director of the Clean Energy Institute and professor of chemical engineering, said in a statement.

The first two floors of the building are referred to as the understory, and will provide multiple indoor/outdoor amenity areas that are covered and shaded. The upper floors, 3 to 11, have a crenelated facade to both maximize views and decrease solar heat gain. Plans include a cascading open lobby and event space, public art, conference rooms and two restaurant spaces.

The design is nearly complete and currently being reviewed for permits by the City of Seattle. The name of the building will be announced in the coming months.

bitchy | The Mail: Queen Elizabeth II is dead because the Sussexes stressed her out