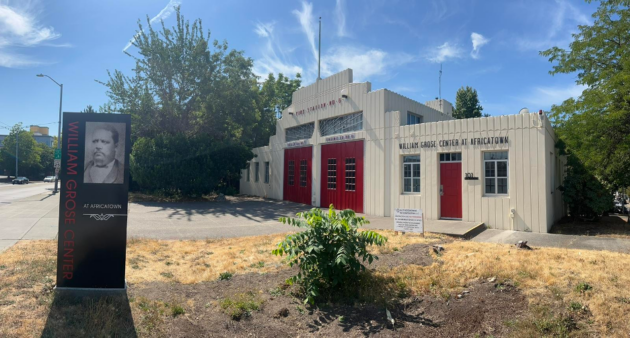 Friday afternoon marks the grand opening of the William Grose Center for Cultural Innovation, a hub for entrepreneurs, creative endeavors, community, education and the sharing of resources in Seattle’s Central District neighborhood.

The center is the realization of a vision to support the historically Black neighborhood, providing opportunities for residents who haven’t had the chance to equitably participate in the region’s booming tech economy. It’s located in the historic Fire Station 6, home to the city’s first Black firefighters, and its namesake was a prominent Seattle pioneer and Black businessman who helped establish the Central District more than a century ago.

But for K. Wyking Garrett, the William Grose Center is more of a milestone than a final destination.

“It’s still the tip of the iceberg,” said Garrett. “What is to come even excites us more than where we’re at.”

Garrett is the president and CEO of the Africatown Community Land Trust (ACLT), the nonprofit organization that created the center.

More than 50 years ago, nearly 75% of Central District residents were Black. That number has shrunk to roughly 15% of residents today, according to the Seattle Times.

So ACLT is investing in Seattle properties with the goal of fostering a vibrant community of Black residents and businesses in a city that’s struggling with sky-high real estate prices and income inequality.

Two years ago, ACLT secured a 99-year lease for the fire station from the City of Seattle. It landed $1 million from the City of Seattle Equitable Development Initiative to pay for renovations. ACLT has also received a total of $400,000 in donations from Key Bank and Kaiser Permanente to support business development and from Boeing to assist with science, technology, engineering and math (STEM) educational programs.

ACLT has worked for many years to build relationships with businesses, educational organizations and individuals in pursuit of its mission, Garrett said. The group has also been developing and testing programs to see what works. The new center will house efforts including:

The center will be a place for outside organizations to share resources, and a spot for community members to discover them, Garrett said.

The William Grose Center is located on the corner of E. Yesler Way and 23rd Ave.

Grose was the son of a free African American restaurant owner and Seattle’s second Black settler, according to Historylink. In 1882 he purchased 12 acres of land in the area from fellow pioneer Henry Yesler, initially using the property as a personal ranch. Grose soon began “parceling out his land as residential lots to African American newcomers,” according to the history site.

Other projects by ACLT include:

“This is a thriving region,” Garrett said. “We want our community to be thriving and reaching and realizing our potential as makers, innovators and entrepreneurs as well.”