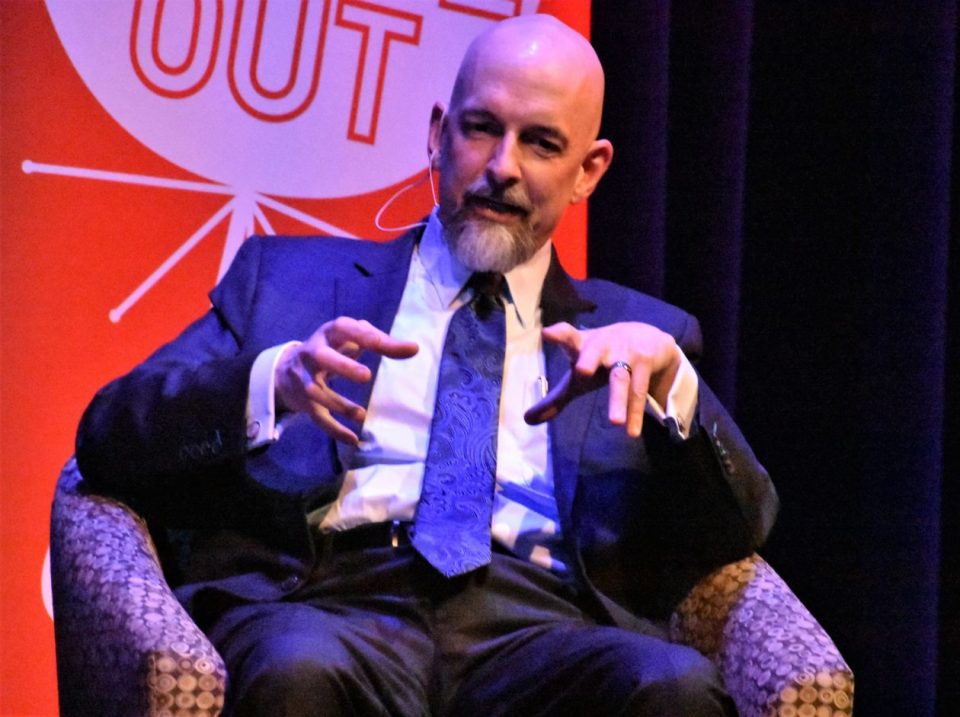 Microsoft and Facebook’s parent company, Meta, have their own visions for a virtual world called the metaverse — but an alternate, open-source vision from Seattle science-fiction author Neal Stephenson is gathering steam.

And while Stephenson may not have billions of dollars at his command, he has a selling point that the tech heavyweights can’t match: He’s the guy who came up with the concept of the metaverse for a 1992 sci-fi novel titled “Snow Crash.”

The venture co-founded by Stephenson and digital currency pioneer Peter Vessenes, known as Lamina1, aims to take advantage of blockchain, a technology that’s just as buzzy as the multiverse. The plan is to develop a Layer 1 (in Latin, “Lamina 1”) blockchain platform that content creators can take advantage of as they build out their corner of the metaverse.

Last November, Stephenson told me that the metaverse as envisioned by Meta and Facebook didn’t exactly match his vision for a virtual world of planetary proportions. “They’re generally not talking about those kinds of planetary-scale things,” Stephenson said at the time.

In the months that followed, the author decided to get into the game himself.

“The 30th anniversary of ‘Snow Crash,’ and recent interest in actually building the Metaverse, has got me thinking about how to do it in a way that’s true to the original concept,” Stephenson said when the veil was lifted on Lamina1 in June. “That means creative ferment rooted in a strong base layer of open-source tech that provides key services to creators while making sure that they get paid.”

In a Medium post, Vessenes said the transactional transparency associated with blockchain will be a good match for a Stephenson-style metaverse.

“I think of it as the base layer for the Open Metaverse: a place to build something a bit closer to Neal’s vision — one that privileges creators, technical and artistic, one that provides support, spatial computing tech, and a community to support those who are building out the Metaverse,” Vessenes said.

Since June, Lamina1 has taken on more of the trappings of a typical tech startup: Stephenson is the company’s chairman, Vessenes is CEO, Magic Leap veteran Rebecca Barkin is president, and Google veteran Jamil Moledina is vice president of games, partnerships and media.

Last month, the company issued a technical white paper that touts the rise of digital goods and digital currencies while “waving the pirate flag” for a digital economy that’s produced and owned by creators.

The white paper’s technology roadmap calls for putting out the initial software tools this month, setting up a blockchain testnet in November, and releasing the alpha version of a metaverse-enabled browser in December. The first Open Metaverse Conference is set to take place in Los Angeles in February.

Lamina1 says a virtual environment inspired by Stephenson’s vision of the metaverse is already “under active early-stage development.”

Real-life Rome wasn’t built in a day, and the same will be true for the metaverse, whether it’s built by Meta, Microsoft, Lamina1 or a combination of those tech players and others. It’s not clear how much funding Lamina1 is drawing upon, but the company’s website currently lists 17 investors — including LinkedIn co-founder Reid Hoffman and Geoff Entress, a managing director and co-founder of Seattle-based Pioneer Square Labs.

If the concept runs out of steam, that wouldn’t be unprecedented. A decade ago, Stephenson conducted a Kickstarter campaign for a swordfighting video game called Clang. The campaign raised more than $525,000 in funding, but in 2014, Stephenson had to cancel the project and issue refunds. “The prototype was technically innovative, but it wasn’t very fun to play,” he said at the time.

There’s a risk that the same could one day be said of Lamina1, or of the multiverse in general. But this time, the virtual and real stakes will be higher.