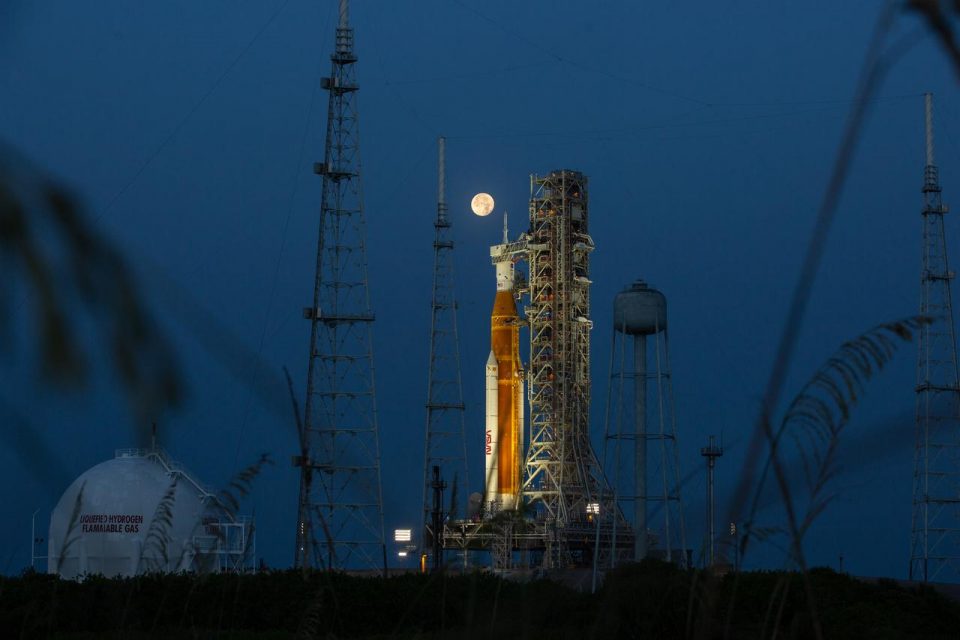 If all goes according to plan, NASA could launch its heavy-lift Space Launch System rocket on its first flight around the moon by as early as Aug. 29.

That’s a big “if,” however: Workers at Kennedy Space Center in Florida still have to finish fixing and testing the rocket’s systems, including components that didn’t get fully checked out during last month’s launch rehearsal.

“We do have some challenges right now as we complete that test and all our final closeout work, particularly in the core stage intertank, to get to a point where we’re ready to roll out,” Lanham told reporters today.

Today’s announcement came on an auspicious day: the 53rd anniversary of the Apollo 11 moon landing.

The schedule calls for the 322-foot-tall, 3.5 million-pound rocket to roll out from the space center’s Vehicle Assembly Building on Aug. 18. That would set the stage for potential launch attempts on Aug. 29, Sept. 2 and Sept. 5. Liftoff would mark the start of NASA’s Artemis 1 mission, an uncrewed test flight that’s meant to blaze a trail for astronauts to land on the lunar surface by as early as 2025.

Artemis 1 calls for the SLS rocket to send NASA’s Orion deep-space capsule into a widely looping orbit around the moon, and then bring it back to Earth for a Pacific Ocean splashdown. The trips associated with the three launch opportunities announced today would last 39 to 42 days.

Three instrument-laden mannequins — nicknamed Commander Moonikin Campos, Helga and Zohar — would provide the mission team with data about the conditions that actual astronauts would experience during a round-the-moon trip on Artemis 2 in the 2024 time frame, and during the Artemis 3 moon landing mission.

NASA will also test a digital voice assistant that’s based on Amazon’s Alexa AI software. Amazon is partnering with Lockheed Martin and Cisco on Project Callisto, which could provide astronauts with in-flight information during future Artemis missions. Lanham said the hardware for the Callisto digital assistant has already been installed in the Orion capsule.

Orion’s most critical test would come at the end of the trip.

“When Orion returns from the moon, we’ll be traveling about 24,500 miles an hour, or Mach 32, and experience temperatures half as hot as the sun outside the heat shield,” said Mike Sarafin, Artemis mission manager at NASA Headquarters.

Sarafin said the heat shield has gone through ground testing, but will face the acid test under atmospheric re-entry conditions during Artemis 1. “We could see something that we didn’t anticipate,” he said.

Jim Free, associate administrator for NASA’s Exploration Systems Development Mission Directorate, said the launch team is working its way through a to-do list that was put together after last month’s rehearsal on the launch pad — including the replacement of fuel-line seals that caused problems during the countdown.

Free emphasized that the dates released today were “not an agency commitment,” but merely a schedule for the launch team to target. “We’re here today to say, ‘Hey, we think we’re on a good path to get to attempts on those dates,’” he said.

Once the SLS rocket is rolled out, mission planners will have to watch the clock on the onboard batteries that provide power for the flight termination system. If liftoff doesn’t occur by Sept. 5 or 6, NASA would have to wait for the next launch window — which would be open from Sept. 19 to Oct. 4 — or perhaps even the following window, which opens Oct. 17.