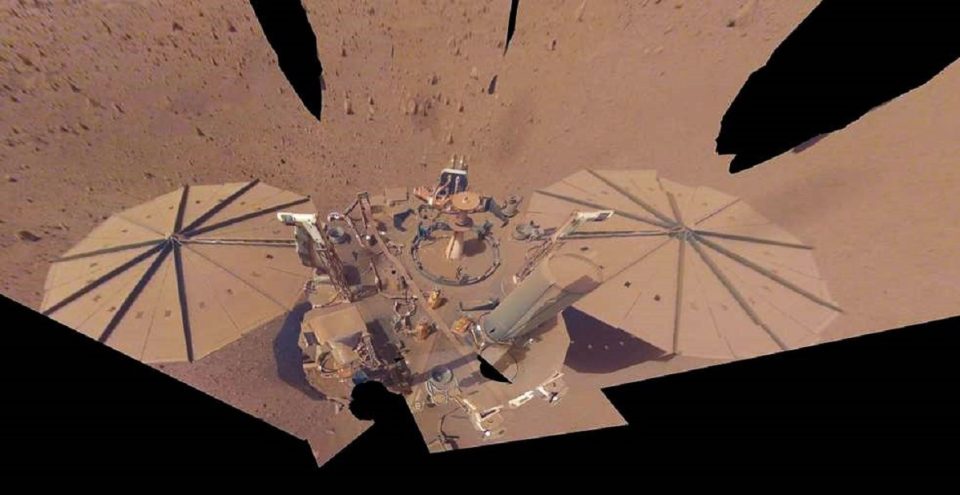 Four years after engineers cheered the landing of the robotic InSight spacecraft on Mars, NASA today declared an end to the $830 million quake-detecting mission.

In a mission update, NASA said the control team at the Jet Propulsion Laboratory failed to contact the lander in two consecutive attempts — which had previously been set as the criterion for ending the mission. Dust had been building up on the probe’s solar panels, and mission planners concluded that the batteries finally ran out of power. The last time NASA heard from Mars InSight was on Dec. 15.

JPL’s Deep Space Network will continue to listen for signals from the spacecraft, but further contact is considered unlikely.

Those involved in the mission chose to concentrate on InSight’s achievements rather than its setbacks. InSight’s primary purpose was to record seismic readings emanating from the Red Planet’s interior. The mission detected 1,319 Marsquakes in all, including quakes caused by meteor impacts. In May, the spacecraft’s seismometer recorded the largest quake ever detected on a planet other than Earth.

“I watched the launch and landing of this mission, and while saying goodbye to a spacecraft is always sad, the fascinating science InSight conducted is cause for celebration,” said Thomas Zurbuchen, associate administrator of NASA’s Science Mission Directorate. “The seismic data alone from this Discovery Program mission offers tremendous insights not just into Mars but other rocky bodies, including Earth.”

The InSight lander was also equipped with a self-hammering spike, nicknamed “the mole,” which was designed to delve up to 16 feet beneath the surface and measure Mars’ internal heat. The sensor-equipped mole was able to dig down only to a shallow depth, however, due to the clumpy nature of the soil at the landing site in Elysium Planitia.

Aerojet Rocketdyne’s facility in Redmond, Wash., built the thruster system that guided the three-legged lander to its touchdown in November 2018 — plus thrusters for other phases of flight.

“From launch to landing on Mars, Aerojet Rocketdyne propulsion was a key enabler of @NASAInSight’s journey to the Red Planet,” the company said in a farewell tweet.

Aerojet Rocketdyne is destined to go through a different type of transition: This week, California-based L3Harris Technologies announced a deal to acquire Aerojet in an all-cash transaction valued at $4.7 billion, inclusive of net debt. The deal is set to close in 2023, subject to customary conditions including regulatory approvals.

In 2020, Lockheed Martin struck a $4.4 billion deal to acquire Aerojet, but that plan was abandoned in February after the Federal Trade Commission filed suit to block the acquisition due to antitrust concerns.