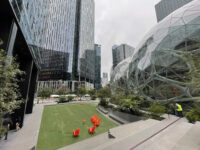 Get caught up on the latest technology and startup news from the past week. Here are the most popular stories on GeekWire for the week of Nov. 13, 2022.

Sign up to receive these updates every Sunday in your inbox by subscribing to our GeekWire Weekly email newsletter.

Most popular stories on GeekWire

Layoffs began Tuesday at Amazon as the Seattle tech giant moved to slash potentially thousands of corporate and tech personnel from its ranks. … Read More

Amazon will become the latest technology company to make massive job cuts, laying off approximately 10,000 people in its corporate and technology workforce, according to a New York Times report this morning. … Read More

The Banana Stand, Spheres, restaurants, food trucks and mini dog park were all bustling on and around Amazon’s headquarters campus in Seattle on Wednesday afternoon. … Read More

As Amazon has started the process of laying off employees from its corporate and tech workforce this week, one senior executive appears to be among the first to address the cuts publicly. … Read More

Amazon CEO Andy Jassy publicly addressed the company’s widespread layoffs for the first time and revealed that the corporate workforce reduction will continue into next year. … Read More

Rad Power Bikes CEO Mike Radenbaugh is stepping down from his position at the Seattle-based e-bike company. … Read More

Bellevue, Wash.-based mobile marketplace operator OfferUp is laying off about 19% of its staff, joining a growing list of tech companies slashing costs amid a shaky economy. … Read More

Unlike Google and Apple, Amazon doesn’t have a smartphone platform of its own for native integration of its voice assistant, after the short-lived Amazon Fire Phone. … Read More

Meta, parent company of Facebook, Oculus, WhatsApp, and Instagram, will lay off 419 workers in Seattle and another 307 in nearby Bellevue as part of its broader cutbacks announced last week. … Read More

MotherDuck is peeking its head above water. … Read More