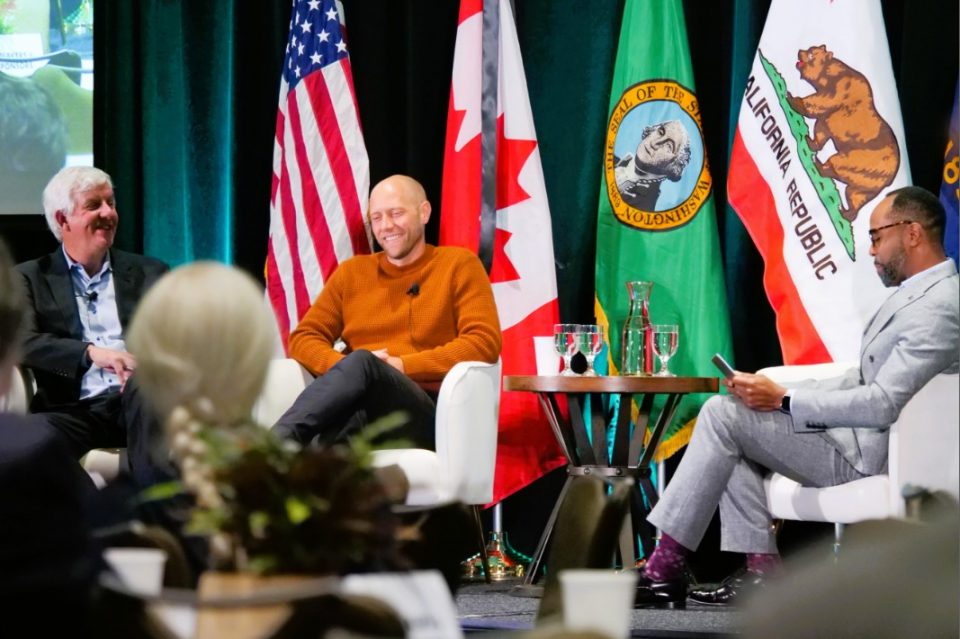 Lucas Joppa was Microsoft’s first chief environmental officer when he took the role in 2018 and went on to help oversee the company’s decision to become carbon negative by 2030 and its creation of a $1 billion Climate Innovation Fund to invest in climate technologies.

But despite Microsoft’s ambitious environmental actions, the company’s carbon footprint grew 21% from 2020 to last year. That followed three years of slight declines in emissions.

Now more than a decade after joining the tech giant, Joppa is leaving Microsoft. This week he spoke at the Cascadia Vision 2050 conference in Blaine, Wash. where he shared thoughts on the company’s willingness to move through setbacks and the actions that all corporations should be taking.

Read on for highlights of that conversation, which was moderated by Yemi Adefulu, deputy executive director of the B.C. Center for Innovation and Clean Energy. Answers have been edited for clarity and length.

On the single most important thing that corporate climate leaders need to be doing:

On Microsoft’s plans to go beyond net zero to removing all of its historic emissions:

Joppa: That was and remains a climate moonshot. But we put in place the resources — a $1 billion Climate Innovation Fund; an internal carbon fee, that’s a real fee that’s collected across the company for all of our scope 1, [scope] 2 emissions — and we started using those resources to make progress. [Scope 1 and 2 refers to direct and indirect emissions from a company, including building energy use, construction projects and corporate travel.]

On Microsoft’s increase in emissions:

Joppa: A lot of people refer to last year’s results as a setback, which is kind of interesting because I didn’t really see it as a setback. I still don’t. As of a week ago, Microsoft was still well on its way to achieving its 2030 targets.

When we first came up with these goals, we said, “Well, we don’t know exactly how we’re gonna get there. We do fundamentally believe that it’s possible to get there.” It wasn’t like we took a flyer, right? We knew the technologies were there. We knew the markets could mature fast enough to support us. We knew we could do all of these things. But we didn’t know exactly, we didn’t have a perfectly predictable model.

On the lessons learned so far on the climate journey, bumps and all:

Joppa: What I’d love people to take away from Microsoft’s results is that there is a company that started acting on day one, putting resources in place on day one, working from the highest level of the company down to the bottom and back up again, to put this stuff in place. And you still have hiccups like that. And so plan for it. Don’t let it get you down.

The thing I’m most proud of about my time at Microsoft and the culture there was how the company responded [to the increased emissions]. They said, “Well, OK, that means that we have to do better moving forward. Full stop, let’s go.” And I thought that was just incredible.

On meeting the demand for carbon removal, whether through land management or mechanically capturing it from the air:

Joppa: For a long time, everybody was just kind of looking at each other, waiting for somebody to act. I think that Microsoft’s large scale public announcement of getting into that [carbon removal] space and then putting resources to bear helped get things moving. Now there’s a large corporate buyers consortium in this space.

We issued the largest request for proposals for carbon removal procurement in the history of the world in 2020. That was a million metric tons we were looking for. And we bought almost all of it. The good news is that Microsoft was able to do that, that we got money into the system. The bad news is that it shows the scale that needs to happen.

The impact of Google Stadia shutdown on Amazon, Xbox, and other cloud gaming initiatives – GeekWire