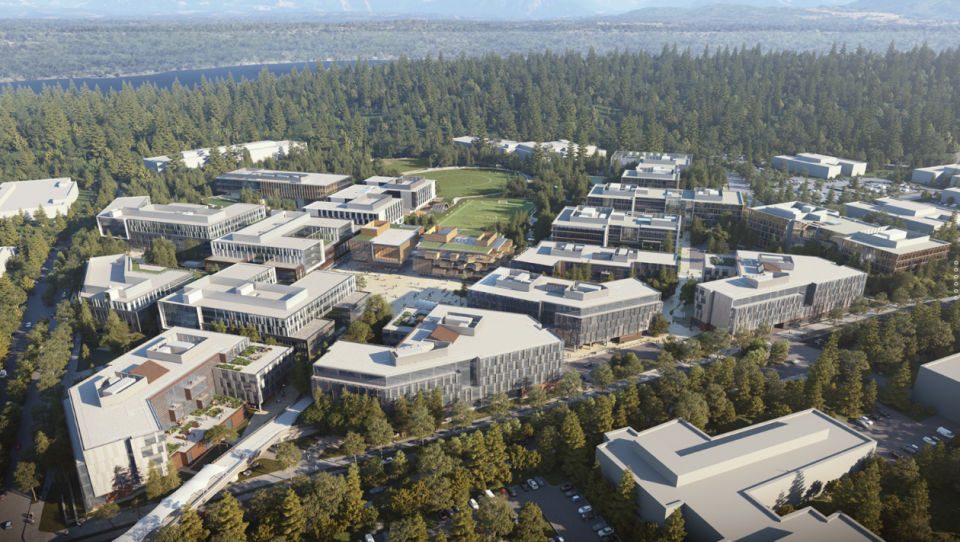 Microsoft is pushing back the timeframe for nine of the 17 buildings in the redevelopment of its original Redmond headquarters campus, delaying their completion while saying it is still committed to finishing the entire project.

The company confirmed the change in response to an inquiry from GeekWire, saying it wants to make sure the buildings reflect the needs of employees and the requirements for office space in the new era of hybrid work.

Microsoft says the first of the initial eight buildings in the project are still on track for occupancy in late 2023, which is in line with a timeline provided by the company earlier this year. Microsoft’s permits for the redevelopment run through 2025, and the overall project is still expected to be completed with that timeframe.

Of the nine additional buildings, work is underway on the exterior of five, while construction has yet to begin on four. Microsoft will continue with the exterior construction but delay the internal build-out of the structures.

The original plans predated the pandemic and the dramatic changes involved in the shift to remote work and now to flexible hybrid work policies. Microsoft says it is opening up buildings based on usage and need.

Amazon similarly said this summer that it was pausing work on several new office towers in downtown Bellevue to determine how its office floorplans need to be adjusted to reflect the new needs of employees.

In recent weeks, economic uncertainty has spurred layoffs at Microsoft, Amazon and across the industry.

Announced in 2017, Microsoft’s redevelopment project is taking place on 72 of its 500 acres, on the swath of land where Bill Gates and others built Microsoft into a tech powerhouse after moving to Redmond in the mid-1980s. The company demolished those iconic “X-wing” buildings to make way for the redeveloped campus.

“We began a long-term plan in 2017 to modernize our campus. We continue working towards being ready to welcome employees to the first of our eight newly modernized buildings in late 2023,” said Allen Nichols, Microsoft director of Puget Sound development, in a statement.

“Our goal is to evolve our physical workplace to drive energy across our campus,” Nichols added. “We are phasing building delivery while we learn how employees interact on campus and will bring them online in a way that supports their productivity and collaboration needs.”