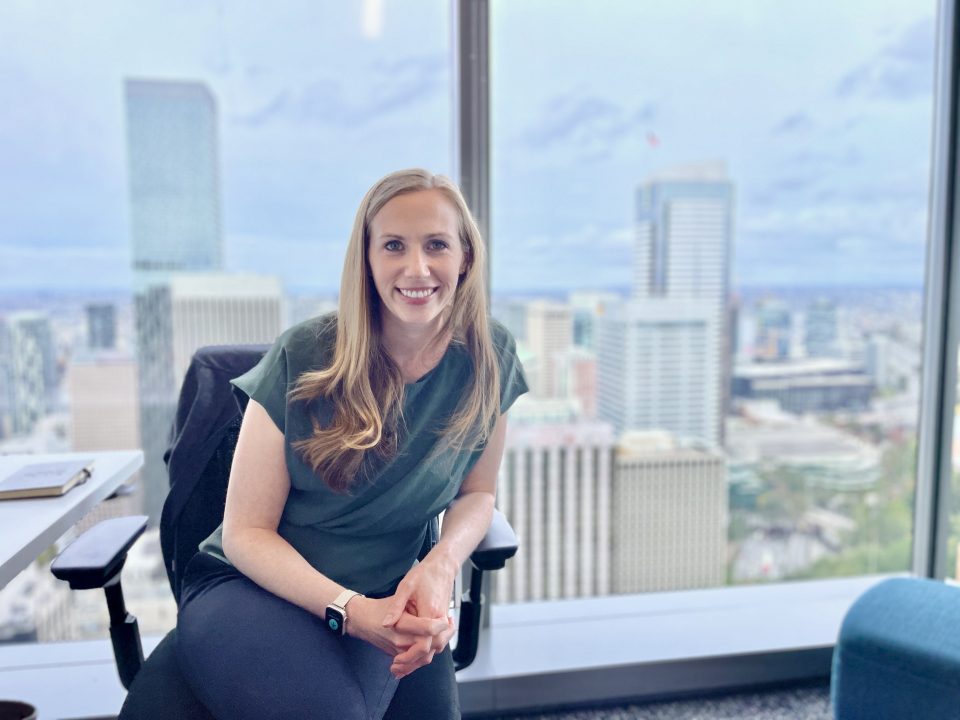 Arzeno became president in September 2020 when the company’s co-founder Michael Rowell stepped away for medical reasons.

Assurance, which uses tech to match customers with insurance plans, was navigating a pandemic that disrupted its business. It was also under new ownership, having been acquired in a massive $2.3 billion deal to Prudential Financial, one of the largest acquisitions in Seattle startup history.

Arzeno, who joined Assurance in 2017 as its chief data scientist, was named CEO in June 2021.

Then earlier this year, a Wall Street Journal story detailed how Prudential’s bid to strengthen its digital capabilities by acquiring Assurance hadn’t lived up to expectations.

The acquisition “didn’t go perfectly,” Arzeno said, speaking to GeekWire at the company’s downtown Seattle offices. Assurance has struggled to hit projections under its parent company Prudential, the legacy insurance provider worth $38 billion.

But she remains optimistic about the future of the business, which reported a $44 million operating loss in Prudential’s most recent financial quarter, compared to a loss of $55 million in the year-ago quarter.

“If we can do this well, then we have created so much value for so many people,” said Arzeno, who earned her Ph.D at MIT and previously led a blood pressure monitoring startup. “And that excites me a lot and is a big reason why I’m here.”

Rowell, who started Assurance in 2016 with Michael Paulus and bootstrapped the company, met Arzeno when they worked together at MIT. He said she has navigated the company “exceptionally well” during her time as CEO. “I can’t think of anyone who could have done it better,” said Rowell, a former life insurance agent.

Assurance has around 1,700 employees, including 140 in Seattle. A majority of the workforce is made up of agents working directly with customers and dispersed across the country.

Read on for more from our conversation with Arzeno. The interview was edited for brevity and clarity.

GeekWire: Thanks for taking the time to speak with us. Can you talk about what the past few years have been like for you and the company, through the pandemic and the acquisition?

Assurance IQ CEO Allison Arzeno: The world has seen a lot of change and impact, and we were clearly not immune to that in some ways. But the talent we have here, the platform we’ve built, all of that has kind of remained the same and allowed us to keep pushing forward.

When you join a company early on, you wear multiple hats as a senior leader. So it was very natural for me to take the president role and lean into that. I didn’t think twice about that part. I knew what we had built, because I helped build it. And I knew that we weren’t quite where we wanted to be in terms of fulfilling our mission.

And what is that mission?

We sell health insurance, life insurance, auto insurance. They’re very complicated and most people don’t even want to understand the complexities of the products. But they want to trust that somebody is there to help guide them through it. So our mission and purpose is to really be that glue for people in helping them make the right purchase and navigate that process, while also having the trust of a human expert.

Talk about competition and how Assurance differentiates.

You can go to a local broker. That has existed forever. But our consumers, their average household income is about $50,000, assets under $100,000 — people who don’t have wealth management or asset management needs. That broker isn’t really going to help because it’s not worth their time.

If that person happens to find a State Farm agent or a GEICO agent, those are a single-carrier policies. And often what people want is navigating choices. How do they pick the right one?

We have competitors in this space who do the same thing, but our focus on that unbiased data-driven recommendation really makes us stand out. That is the core piece of the engine. We’ve tried to create a relationship between the old school sales piece and the new age data science, and recognizing that they’re better together.

How do you think about data science and how it affects businesses today and in the future?

There is a gap right now in people who can speak business and speak data science. Data is everywhere. People talk about the data they have, but they’re not using it in ways that can add value to the business. So that’s where I see the world going — people starting to recognize that if they can fill this gap of people who can marry data science with business fundamentals, that’s where really cool things are going to start happening.

How has the shaky macroeconomic environment affected Assurance?

I feel very fortunate that we were acquired by Prudential in 2019. Being part of the Prudential family has given us that strong partnership and backing that I think a lot of people are struggling to find right now. So that has been a really positive thing for us.

When you’re facing a recession or people are struggling to fund things, life insurance can feel like a discretionary spend. At the same time, with Medicare, if we can help people save $4,000 a year through switching their Medicare plans, that’s good now and that’s good in a recession.

Generally I think we feel fortunate to be where we are. And while we’ve absolutely had challenges, we believe we’re set up to actually help consumers facing a recession.

RELATED: How a stealthy insurance tech startup bootstrapped its way to a $2.35B acquisition in less than 4 years

Talk about the Wall Street Journal article and how you and the company handled the aftermath of that.

The day before that story published, we had an all-hands meeting at the company. I talked about how it wasn’t going to feel good. The story pointed out some things that were true and we weren’t necessarily excited about, like the fact that we didn’t hit the targets that were set out for us. But even though the story hurt, I think people were able to look at it through that lens and say, “some of this is fair, but it doesn’t take away from our mission or purpose what we’re trying to do.”

While the story is mentioned periodically, it’s not something that people are hyper focused on. We didn’t lose employees because of it. And I think that’s really because people said, “ow, that stings. But I still believe in what we’re doing. We’re not perfect, but we’re going to keep trying to create this thing we know we can do.” So that’s very much been the attitude and approach to it, which I think is the right one and I’m very proud of that.

You previously led data science efforts at blood pressure monitoring startup Quanttus and took over as CEO for a brief period. The company ultimately ran out of money and shut down in 2016. What lessons did you take from that experience?

My passion for using data to solve real-world challenges is what initially drew me to Quanttus. In 2016, I was leading our data science efforts when the board tapped me to step into the role of CEO. By that point, the company was struggling — we needed more data to refine the technology. Building a wearable device for continuous blood pressure monitoring proved to be harder than anyone expected.

Trying to save the company was one of the most challenging and humbling experiences of my career. It involved a lot of hard conversations with venture capitalists Vinod Khosla and Stan Reiss, who I have an enormous amount of respect for and I continue to be grateful today for the opportunities and lessons they taught me. I believed so deeply in our mission — I still do. At the end of the day, Quanttus was ahead of its time and funding ran out before we could get to market.

While this was not the outcome we wanted, it’s a hard reality in the world of startups, and the experience made me a stronger, more resilient leader. It also taught me a lot about my personal leadership philosophy. I believe in the power of data to shape business strategy, approach problems with optimism, value inclusivity and love a good challenge. This is the mindset we need at Assurance today to change the insurance industry to improve access for the mass market.