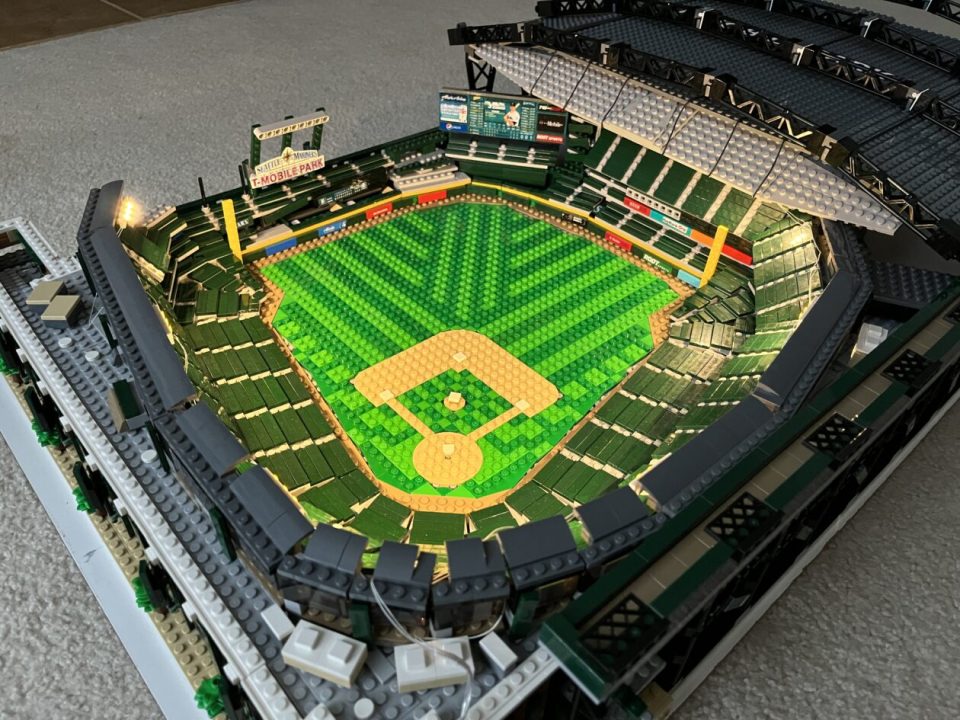 The Seattle Mariners have been busy assembling the building blocks for a potential run to the World Series. Shane Deegan has been assembling them as part of a major LEGO recreation of the team’s home ballpark.

Deegan, of Mukilteo, Wash., has completed a 60-hour brick-by-brick LEGO build of T-Mobile Park, complete with a rolling retractable roof, centerfield scoreboard, lights, banners hanging from the rafters and much more detail.

A longtime LEGO fanatic who played with the popular toy as a kid, Deegan got back into assembling when his daughter was around 4 years old. She’s almost 7 now, and the pandemic was a great time to build together.

“We started building local stuff and things that we were passionate about,” Deegan said. “We built a ferry boat, we built Husky Stadium. I had my eyes on this one for a while.”

Deegan, 42, calls himself a Mariners fan who came of age during the era when cities and teams were building stadiums that hearkened back to the classic ballpark designs. T-Mobile Park (formerly Safeco Field) fits that bill.

“A big part of my hobbies as a kid was drawing and designing and building baseball stadium models, and so this is a longtime passion for me,” Deegan said.

A 20-year employee of the clothing retailer Zumiez, Deegan is now social media manager for the company, which he thinks plays well off his creative streak.

He started his T-Mobile Park build in August and didn’t rely on any instructions or modeling. He simply started building, from home plate out, from the bins of assorted bricks that he has in his house. He estimates there are more than 12,000 pieces in the final product, which has a 36-inch by 24-inch footprint and is about a foot tall at its peak.

He shared images from around the ballpark in tweets on Sunday.

He laughed about some of the ribbing he has received online for using an image of former Mariners catcher Mike Zunino on the centerfield scoreboard. Zunino played for the M’s from 2013 to 2018.

“I was so considerate about everything and I had all these grand plans, and then I got on Google and I just found a perfect high res image of the Mariners scoreboard. And I just got lazy at the finish line,” he laughed, saying he knew he should have used an image of new M’s star Julio Rodriguez.

He said someone commented, based on the batting lineup, that he used a 2014 photo.

“I did not expect that level of scrutiny,” Deegan said.

Rodriguez, along with JP Crawford and Luis Castillo, is featured in large banners of star players that hang at the northwest entrance to the stadium. A Minifigure statue of Ken Griffey Jr. stands in front of the southwest entrance.

Getting the iconic retractable roof to roll under the power of a LEGO train motor proved to be the most challenging aspect of the design. For fear of collapse, Deegan ultimately abandoned that plan and the roof is rolled by hand.

He might rebuild the train tracks and re-engineer the supporting walls of the north grandstand so that it’s all braced by the stadium. He would definitely do that if the Mariners or T-Mobile Park had some interest in displaying the build.

But they better hurry.

Deegan and his daughter play side by side, and she gets to add her touches when a model is complete. After they built Husky Stadium, she added a yellow ladder to the exterior — so that fans “could get inside.”

After that, the two of them tear down what they’ve built and put the LEGO bricks back into the bins for the next creation.