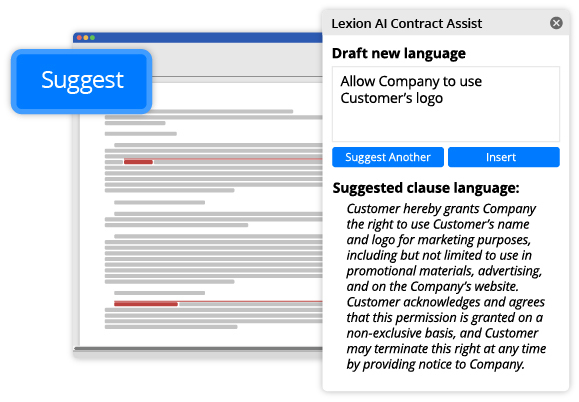 Seattle legal tech startup Lexion is the latest company to take advantage of GPT-3, the language model from OpenAI that drew widespread interest following the recent release of ChatGPT.

Lexion’s software helps lawyers make sense of contracts. It rolled out new features today for its Microsoft Word plug-in, including the ability to suggest potential edits and write entire text summaries thanks to GPT-3.

For example, a user can ask Lexion to propose language related to a specific clause in a contract, and it will instantly produce a draft.

The idea is not to completely rely on AI, but for it to improve overall efficiency, said Lexion CEO Gaurav Oberoi.

“It’s assistive,” he said. “Think of it as a junior attorney doing something.”

GPT-3 is also being used by Lexion to help generate suggested edits to a contract, or to quickly summarize clause language.

OpenAI offers GPT-3 as an API that companies such as Lexion can pay for and use. Language learning giant Duolingo uses GPT-3 to provide grammar suggestions; Keeper Tax, a San Francisco startup, uses GPT-3 to interpret data from bank statements and find tax-deductible expenses.

“It’s clear to us from the experimentation we’ve been doing that it’s already going to be commercially useful for people to do this,” Oberoi said of businesses using GPT-3.

However, there are limitations to the tech, Oberoi noted, and there aren’t strong enough guardrails yet. “Sometimes it can spew very convincing nonsense,” he said.

That’s why Lexion advises customers to not assume that the features are completely reliable on their own — there still needs to be a human in the loop.

“What we’re saying is, if there’s an expert driver, why not give them the tooling so they can make decisions and go faster?” Oberoi added.

Big picture, Oberoi expects a “huge new wave of automation” in various software-as-a-service products. Some of the more immediate use cases include enhancing customer support or sales, among other functions, particularly as the AI models are fine-tuned to a company’s data.

Oberoi also envisions AI plugins for Slack or email that monitor everything going on and can answer questions such as, “what were the biggest issues engineering dealt with this week,” or, “which customers are really happy or not happy?”

Lexion spun out of Seattle’s Allen Institute for Artificial Intelligence and last year raised $11 million in a Series A round led by Khosla Ventures, also a backer of OpenAI.

The company has avoided layoffs amid the broader tech downturn and tripled revenue this year, said Oberoi, a finalist for Startup CEO of the Year at the 2022 GeekWire Awards.

Oberoi co-founded Lexion with Emad Elwany and James Baird and previously helped build BillMonk, a bill-splitting app that predated Splitwise. He also created Precision Polling, an automated survey startup that was later purchased by SurveyMonkey. Elwany previously worked as an engineer at Microsoft on artificial intelligence and Baird is an engineer who came from web development firm Pancake Labs.