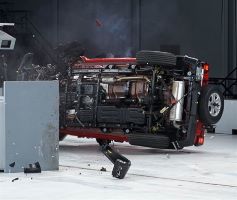 
Tip over test reveals a persistent safety concern for the Jeep Wrangler.

The nonprofit Insurance Institute for Highway Safety (IIHS) recently put the 2022 Jeep Wrangler through its crash test paces, but once again the Wrangler failed the driver-side small overlap crash test. That test was initially conducted on the 2019 model where the problem was observed. Following structural modifications made by the manufacturer, the IIHS repeated the test.

Once more, the 2022 Wrangler tipped onto its passenger side after hitting the obstacle used in the crash test. As a result, the Institute assigned the Wrangler with a marginal rating for driver-side small overlap protection. Notably, a “good” rating in the test is mandatory to achieve the Institute’s coveted TOP SAFETY PICK award.

Partial rollovers are alarming, as they raise the possibility that a passenger may be fully or partly ejected from the automobile. That’s particularly relevant for the Jeep Wrangler, which has a removable roof and doors and does not have side curtain airbags. For the Wrangler experiment, the IIHS did not include a front passenger crash test dummy, relying on a driver dummy only. In any case, the exposure to the front passenger in an accident such as this one indicates severe injury or worse is likely.

The Wrangler was fully redesigned in 2018, then tested in 2019 when the tip over was observed. Initially, the automaker submitted documentation to the IIHS demonstrating the Wrangler did not tip over. However, once audited and tested by the IIHS, the tip over problem became evident. Stellantis, the new owner of Fiat Chrysler, had been working on structural modifications since the initial test.

Other than the tip over, the Jeep Wrangler did perform well in other tests. For instance, the Wrangler four-door achieved top scores in roof strength, head restraints & seats, and moderate overlap front. In headlight testing, however, the Wrangler achieved no better than a marginal score on some trims and poor on others.

The IIHS did recognize this Jeep for its available front crash protection system, assigning it a superior score. On the seat belt reminder front, the Wrangler scored “marginal,” while on the LATCH ease of use, it came in with a good+ rating.

What is the IIHS?

The IIHS is funded by America’s insurance companies and associations. The institute’s crash testing is more comprehensive than the federal government’s assessment methods and routinely finds its way into manufacturer marketing methods.

After years of decline, passenger vehicle deaths are on the rise again. That said, the IIHS continues to upgrade its test standards, holding manufacturers accountable accordingly. Notably, the IIHS routinely raises the bar on its testing procedures, keeping manufacturers informed of upcoming changes. Those details are prominently displayed on the Institute’s website.

The IIHS also makes recommendations to federal agencies to update their requirements. For instance, the Institute has asked the federal government to “…to require manufacturers to equip all new passenger vehicles with automatic emergency braking (AEB) systems capable of detecting and avoiding pedestrians in the dark as well as in daylight.” The IIHS notes that one-third of pedestrian fatalities occur on unlit roads at night. Thus, the upgraded technology might reduce deaths accordingly.

Auto Trends does not make “buy” recommendations based on vehicle crash test results. However, with the information supplied, we remind readers of the importance of understanding all crash test evaluations as part of their shopping decision-making. Ultimately, though, we hope Stellantis addresses this persistent Wrangler tip-over problem. Lastly, we appreciate the work of the IIHS in making passenger vehicles safer through its rigorous testing requirements.

(n.d.). Regulators should require pedestrian AEB that works in the dark. https://iihs.org/news/detail/regulators-should-require-pedestrian-aeb-that-works-in-the-dark

Photos courtesy of the Insurance Institute for Highway Safety.

What is the Coefficient of Drag? — Auto Trends Magazine

7 Causes of Noise When Turning the Steering Wheel