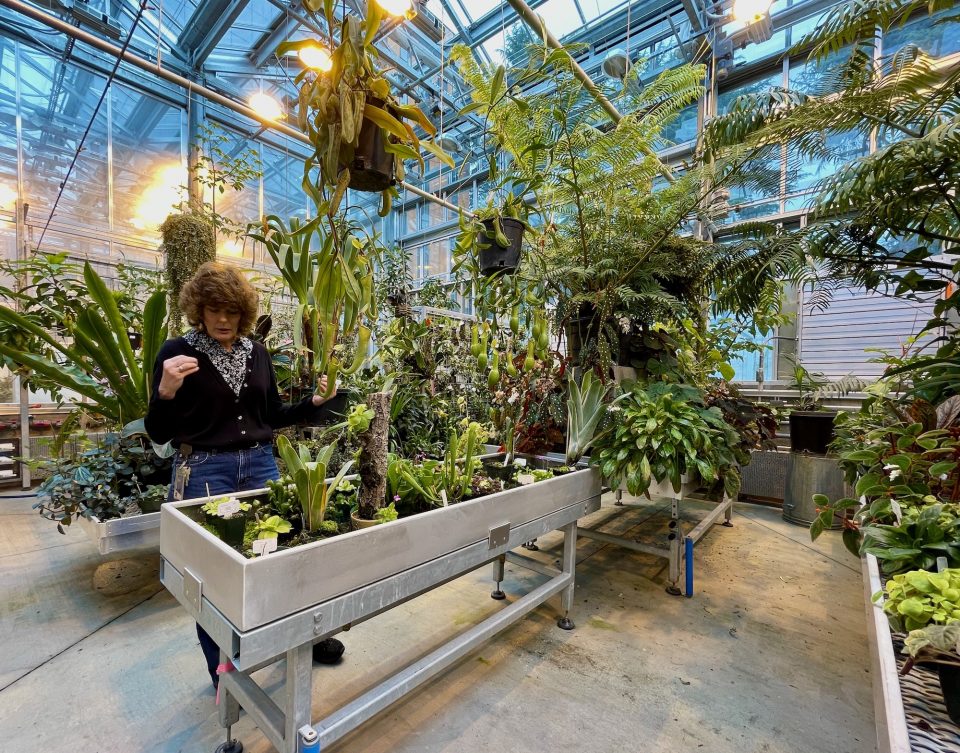 Exposure to plants and nature is said to make humans calmer and more productive, and just feel better overall. That theory will be put to test inside a sprawling new greenhouse at the University of Washington in Seattle, where the public will get the chance to regularly mingle with some 6,000 plant specimens from around the world.

The 20,000-square-foot concrete, steel and glass greenhouse replaces the original Botany Greenhouse, where the UW’s biology department had amassed one of the country’s most diverse plant collections over a period of 65 years.

The facility just off the Burke-Gilman Trail is part of the UW’s relatively new Life Sciences Building, a 207,000-square-foot building that opened in 2018 to house the biology department’s teaching and research spaces.

Happy human greenhouse visitors will be matched by the plants, which are happier now thanks to technology that maintains more consistent control over such vital variables as lighting, temperature and humidity. Fans, misters, windows, shade screens and lights are all computer controlled.

“They have much better conditions,” said David Perkel, professor and chair of the UW’s Department of Biology, during a GeekWire tour of the greenhouse this week. He called the new space “state of the art” and the previous space “very, very, very, very manual.”

“It was substantially smaller … and old. Not automated at all,” Perkel said. “There were chains to open some of the higher windows. The greenhouse manager would climb up on top of the building to put shade cloth up when necessary.”

Greenhouse manager Katie Sadler called the controls and sensing technology “very complex” and said each bay is programmed independently of the others.

“We can change fertilizer formulas with a push of a button,” Sadler said. “We can change a number of variables to make the environment completely different if a researcher needed, so it allows for a lot of flexibility in research opportunities.”

Some of that research is focused on climate change. In highly controlled growth chambers, researchers are conducting specific experiments on how changes in temperature, humidity and carbon dioxide levels will affect future plants.

But it’s not all they do.

Another professor is studying what caterpillar saliva does to leaves and how the leaves respond to the molecules and mount different defenses against any attack.

The UW trades specimens with a number of institutions, and its collection is well regarded due in part to some of the endangered species it maintains.

“We have a specialty in ancient plants, the plants that evolved really early and are still around,” Perkel said. “That’s one of the things that sort of puts us on the map nationwide and distinguishes us.”

Some of the plants were on Earth during the carboniferous and cretaceous periods, many millions of years ago.

During construction of the new facilities, the collection was stored at a greenhouse complex in Redmond, Wash., where Amazon was also housing plants that would eventually be planted in The Spheres on its Seattle campus.

While Amazon built its glass-domed structures as a work-space perk for employees, they are open at select times for the public. The UW is taking the same approach with its greenhouse, which will be open to the public on a walk-in basis on Thursday afternoons, starting in December.

Along with the mission of being a research and teaching facility, the greenhouse is also designed to facilitate outreach — to K through 12 students, to the broad public and to the university community — to ask, as Perkel put it, “Aren’t plants amazing?”

“Children come in and get sparked and become plant lovers for the rest of their lives,” he added.

Sadler still gets that spark in multiple ways every day.

“It’s a pleasure every day. Every single day I learn something,” she said. “And to successfully propagate and grow a plant that’s extinct in the wild — that’s really cool.”

If the earth starts shaking, get to higher ground ASAP – GeekWire