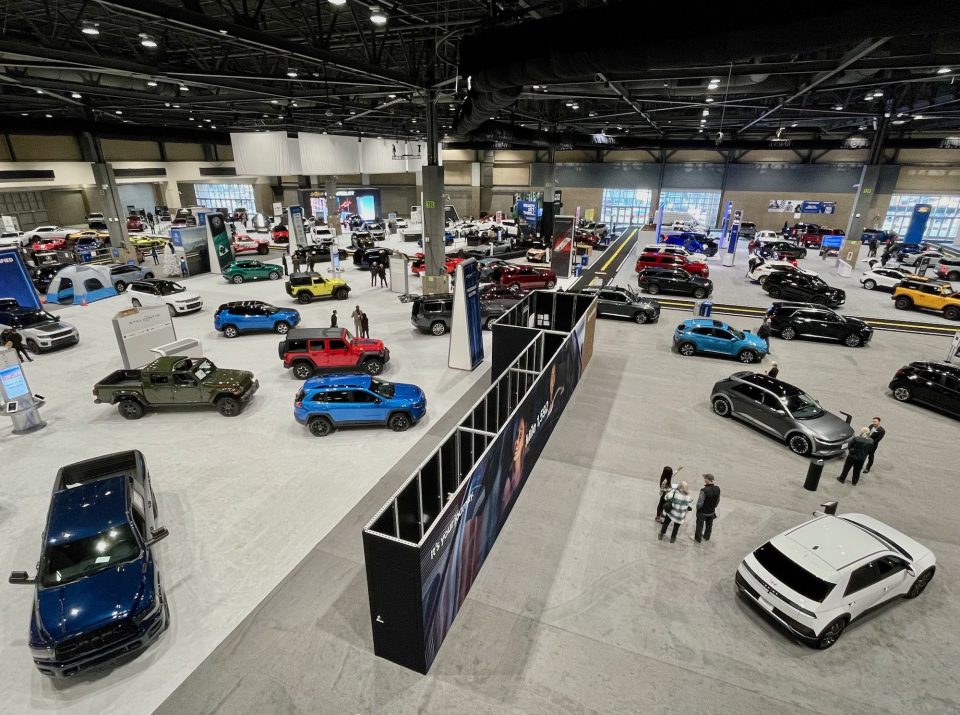 You know the move toward automobile electrification is getting serious when they roll out the electric Hummer.

GMC’s monster Hummer EV pickup is among the notable vehicles on display this weekend as the Seattle International Auto Show rolls back into the Lumen Field Events Center.

With more than 300 cars, trucks, SUVs, crossovers, hybrids and more, electric vehicles are once again the talk of the show thanks to the fact that mainstream automakers are getting more invested in the action.

“These are game changers. They are the vehicles that people want to drive,” said Tom Voelk, spokesperson for the show, a New York Times auto journalist and host of the YouTube channel Driven. “They don’t look like science fiction projects,” he added, pointing out Chevrolet’s new Blazer and Equinox EVs.

Across the expansive Events Center, Voelk showed GeekWire numerous EVs from the likes of Ford, Volkswagen, Audi, Kia, Nissan, BMW, Hyundai and more that are sure to be head-turners.

Ford has certainly learned that lesson with the F-150 Lightning pickup — an electrified version of the top-selling vehicle in the U.S. The truck was on display at the show last year and this year is available for test drives. I couldn’t resist getting behind the wheel.

“Is it even on?” was the first thing out of my mouth when I started the truck — which is something I’ve never said in any truck I’ve ever driven. And the Lightning is unlike any truck I have ever driven.

In a quick cruise through Pioneer Square and SoDo, the Lightning impressed me with how quickly it accelerated — with virtually no noise. This is not a new revelation to electric vehicle drivers, but behind the wheel of a large pickup truck it felt like some sort of sorcery.

“Electrification actually makes the F-150 better,” Voelk said. And sales may be confirming that. Ford announced last month that it tripled EV sales in the U.S. in September, led by the Lightning.

The best way to make it feel special was to follow that test drive with a drive in Ford’s beefy (gas-powered) Bronco Raptor. With suspension and 37-inch tires designed for much rougher terrain, the loop around Lumen Field was a tease. While the F-150 felt comfortable on city streets, I would have preferred to get the Bronco dirty.

Talking about desirable electric trucks shows just how far EVs have come, especially in a city where every other vehicle on the road these days seems to be a Tesla. Voelk called the Hummer EV a smart move by General Motors, to demonstrate that electric vehicles aren’t just simply about the environment and that zero-emission vehicles can still have incredible capability.

“The Hummer was designed to make sure that the truck bros are comfortable with electrification,” he said. “I’ve driven the Hummer off road, and it’s amazeballs. It’s just crazy what it does. It will crab walk — it’ll literally move sideways. It’ll do 0 to 60 in three seconds.”

The ID.4, with its glowing red VW emblem on the back and honeycomb headlight style up front, is especially eye catching for this onetime Beetle and GTI driver. The cars on display are made at a new manufacturing facility in Chattanooga, Tenn.

Visitors to the show who are attracted to various EVs are sure to get caught up in the conversation around range and charging infrastructure. But Voelk feels like that focus is misguided considering how many people use their vehicles predominantly for 30-40 miles of daily driving, and not long travel.

“EVs are best when you’re charging where you sleep,” he said. “But on a longer trip, yeah, it’s going to take a little bit longer. You just have to plan a little bit differently. It’s amazing how fast your car charges up when you just go get a cup of coffee. It’s almost done by the time you go into Starbucks and get your Frappuccino.”

Keep scrolling for more images from the Seattle International Auto Show, which continues through Sunday. Check here for hours and ticket info.