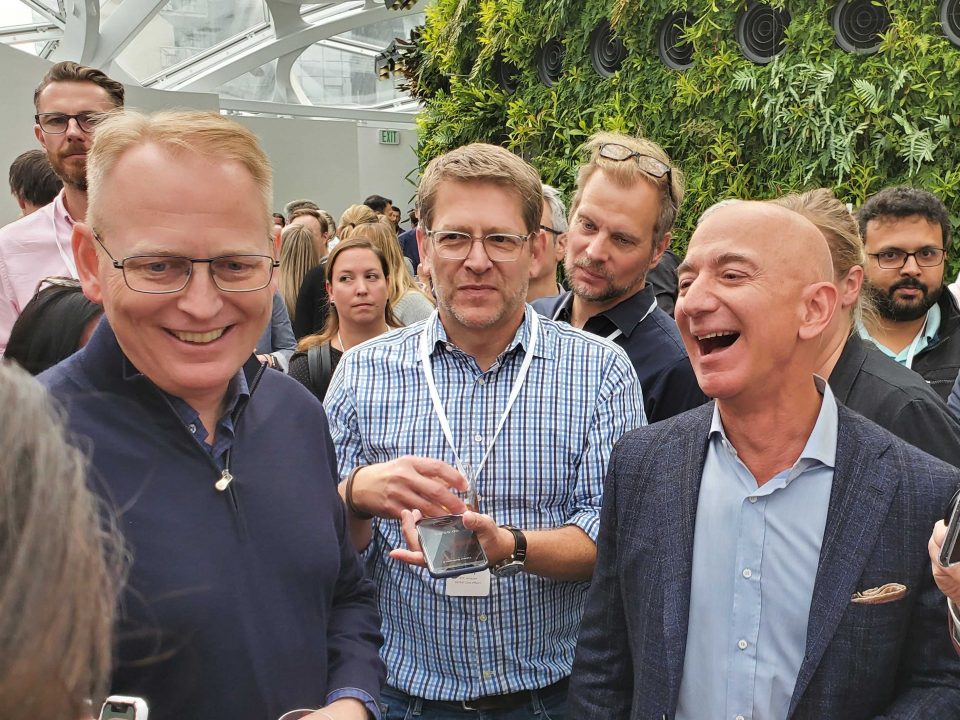 It’s a significant departure for the Seattle company, and chance for Carney to shape the policies and approach of a third world power. In a 2019 interview at the GeekWire Summit, he joked that he joined Amazon after grappling with the White House press corps because “it was time to take on a really relaxing job like this.”

Of course, as he acknowledged, his tenure at the tech giant was anything but. Carney’s seven years at Amazon coincided with the rapid expansion of its workforce and business, and growing scrutiny from competitors, activists, media, legislators and regulators in Washington, D.C., and around the world.

A former journalist, Carney brought to Amazon the credibility and institutional knowledge of a former White House insider — representing Amazon in meetings with world leaders, defending the company fiercely in the press, and sparring with reporters behind the scenes when he perceived bias in their coverage.

His hiring by Amazon in 2015 was viewed at the time as a savvy move by the company, instantly boosting its Beltway standing and influence, but the realities of the situation didn’t always match the outsized expectations.

In a message this morning to Amazon’s senior leaders, obtained by GeekWire, Amazon CEO Andy Jassy credited Carney for his “many significant accomplishments” in the role, including expanding and leading the company’s Public Policy and Public Relations teams, and launching and overseeing its philanthropic and community engagement initiative known as Amazon in the Community.

Carney is expected to leave Amazon at the end of August, and join lodging and tourism marketplace Airbnb in September. Announcing the hire, Airbnb said Carney “will serve on Airbnb’s executive team and work with co-founder and CEO Brian Chesky to ensure that as Airbnb grows, we strengthen the communities we are in.”

In a message to his Amazon colleagues, Carney wrote, “Nearly seven and a half years ago, I came to Amazon with a lot of excitement and even more to learn. All I knew was that I wanted to be part of an organization that mattered and had positive impact, and to work with people who were smart and creative and committed to doing big things.”

“Everything about my time at Amazon has exceeded my expectations,” Carney added, expressing gratitude to his colleagues and confidence in the remaining leaders of the teams he oversaw.

Carney’s tenure at Amazon also demonstrated the complexities of national politics, and the fleeting nature of political influence.

After celebrating the inauguration of his former boss Joe Biden as president, for example, Carney has faced an administration aggressive in its pursuit of Amazon over antitrust issues. Biden himself has been pointed in his public criticism of the company over its response to union efforts among its warehouse workers.

The Wall Street Journal reported in March that Carney had “sent a series of frustrated messages to White House chief of staff Ron Klain about perceived slights against Amazon,” citing anonymous people familiar with the messages.

Carney found it difficult at times to avoid wading back into national issues beyond the scope of Amazon, apologizing publicly in 2019 for his pointed criticism of a Major League Baseball umpiring crew.

Answering a question at the GeekWire Summit the same year, he made headlines for a response that implicitly questioned the honesty and patriotism of President Donald Trump’s administration.

Carney also played a key role in Amazon’s search for a second headquarters, which generated international awareness of the company’s economic impact, sent a message to leaders in Amazon’s hometown of Seattle, and culminated in the ill-fated choice of New York as one of two locations for the HQ2 project.

Speaking in 2019, Carney said he encouraged his staff to get excited about the challenges they encountered: “Isn’t it great?” he said. “Because we get to be part of these really, really vital, world-changing discussions.”

bitchy | Mandy Moore on canceling her tour while pregnant: I felt like a shell of myself