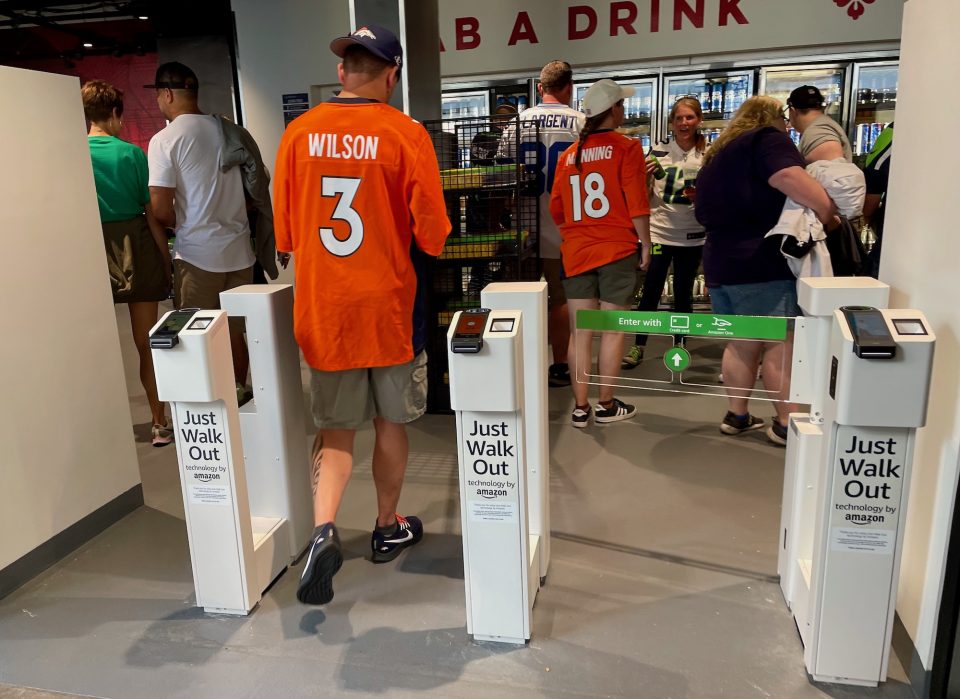 On a night when Russell Wilson returned to Seattle and received mostly boos from Seahawks faithful, fans were cheering for a new high-tech concession stand at the team’s stadium.

Lumen Field became the third professional sports venue in Seattle to feature Amazon’s cashierless “Just Walk Out” technology in a food and beverage store. The new District Market, located across from the Fan Deck at the south end of the stadium, also utilizes Amazon One, the company’s palm-scanning technology, making Lumen Field the first and only venue in the NFL to feature both innovations.

Just Walk Out is billed as a frictionless way for fans to avoid concession lines and get back to their seats faster. Professional sports franchises across the nation are rolling out checkout-free stores from Amazon and other competitors in a test of the nascent technology.

Fans can enter, shop, leave and pay without having to deal with any food handlers or cashiers. The retail tech, used in Amazon’s Go convenience stores and some of its full-size Fresh grocery stores, relies on overhead cameras and sensors to track what customers grab. Payment is facilitated automatically via a credit card scanned at entry or linked to a biometric scan of their palm via Amazon One.

The new store was so popular on Monday that a line did form at times inside because of a bottleneck of people waiting to get out. Fans are required to pop the top on any alcoholic beverages they are grabbing, and many appeared to not know that yet.

But that line was minimal in size and time spent compared to lines at other concession stands where people waited to do things the old-fashioned way. We counted 30-to-40 fans coming out of the store per minute at peak times, just before kickoff — a rate that would be difficult to match at a traditional stadium concession.

The first game of the season for the Seahawks was already going to be a rowdy affair, in primetime on “Monday Night Football.” But with the return of Wilson and his new team, the Denver Broncos, fans were especially fired up before the kickoff as they loaded up on beer and food.

A steady stream of orange Broncos jerseys — many with Wilson’s name and No. 3 on the back — filed in and out of the District Market. Two guys wearing chef’s hats were all about the “Let Russ Cook” mantra, started in Seattle as a call to let Wilson take control of games.

But the majority of the 68,000 fans in attendance sported Seahawks colors, including a guy with a chef hat of his own and a sign that read “Let’s Cook Russ.”

There is some cooking, or warming, going on in the District market, but most of the space in the store is dedicated to a wall of coolers for beer, wine, seltzer and non-alcoholic beverages. There are a few shelves for chips, peanuts, popcorn and candy and a self-serve hot food bar has selections inspired by the stadium’s neighbors in Seattle’s International District — char siu BBQ pork ($10.49); crab rangoon ($11); bulgogi hot dog ($13.99); and hot & sour soup ($9.49).

Amazon licenses its tech for use in such places as stadium and airport stores. Lumen Field join Seattle’s two other Seattle sports venues using Just Walk Out. It’s in use at three stores in Climate Pledge Arena, where the Seattle Kraken play, and at T-Mobile Park, home of the Mariners, where it was introduced in May at a new “Walk-Off Market.”

The Mariners have been “thrilled” with the cashierless tech test, Sports Business Journal reported last month, with substantial increases in transactions and other benefits like freeing up space in the concourse, where long lines of people waiting to buy food and drink typically crowd the area.

Football fans we spoke with on Monday mostly expressed excitement about their experience in the store. Some wondered if they were even charged for their items, or how exactly Amazon tracked their movements. But the efficiency of the process seemed to trump any privacy concerns.

In addition to the new retail experience, the Seahawks and Lumen Field rolled out some other new tech for the season opener.

After big slowdown in IPO and M&A activity, analysts optimistic for a rebound – GeekWire