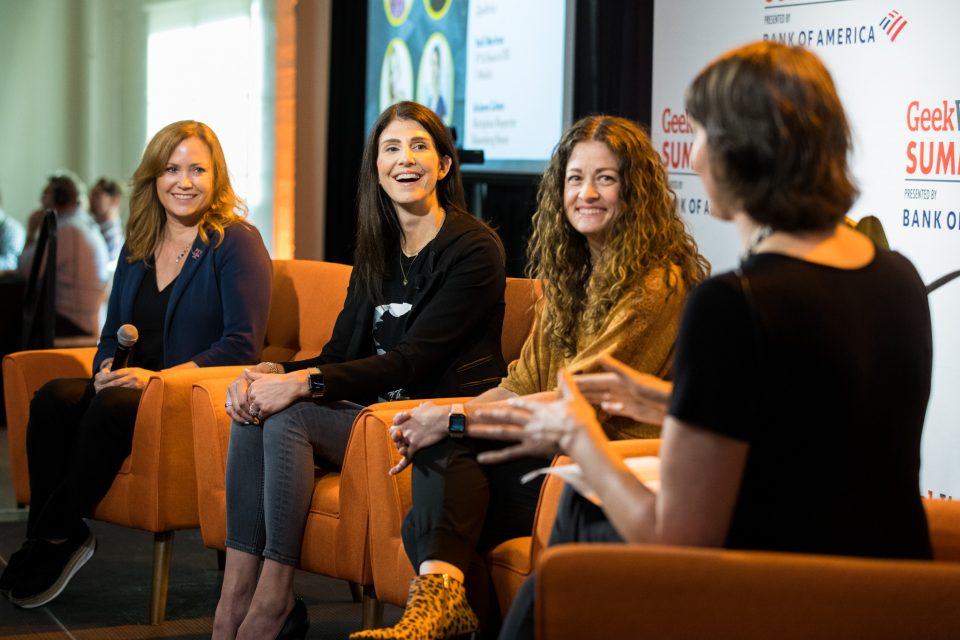 As concerns related to the COVID-19 pandemic recede, companies are still feeling their way through the future of work. Who’s coming into the office, how often, for what purpose and what does the workplace itself even look like?

A trio of tech leaders joined the GeekWire Summit in Seattle last week to share their strategies for navigating work in 2022. The group agreed that flexibility is one critical ingredient for a successful transition to this new era of hybrid work.

About a year ago, Smartsheet leadership systematically looked at every job in the company, determined which were remote eligible, and established the expectations of each role. The company is centering on employee choice and agility in adapting to their workforce needs.

“We’re trying to make choices that align with our purposes and our mission,” Hansen said.

Qualtrics initially proposed that employees come in three days a week. “It didn’t go over well for our population,” Anas said. So it went back to the drawing board and let individual teams set their own schedules. Now most employees are working one or two days in the office.

Listen to your employees

All three companies embraced multiple avenues for gathering feedback from workers. For Qualtrics, that included five questions that the company is asking 10-to-15% of their workforce each week, such as: how often are you coming into work; what draws you in; your satisfaction with working onsite; did you make meaningful connections; and were you productive?

The survey also includes an open-ended question about how they could improve the experience, which generates “a lot of creative writing and ideas,” Anas said. The company has polled 70% of its employees so far.

Martinez said that T-Mobile’s strategies include hosting listening sessions and working with employee resource groups (ERGs) to make sure that they’re hearing from workers who belong to minority groups.

During the pandemic, T-Mobile merged with Sprint, which led to a $160 million remodel of the company’s headquarters and a re-imagining of its workspaces. The new approach features rooms evocative of living and dining rooms to facilitate collaboration; rooms designated for nursing mothers and prayer; a pub; and a food hall.

“There are spaces that make you want to be there,” Martinez said.

Qualtrics incorporated onsite beer taps in Dublin and Seattle, where it recently opened a new co-headquarters office. The focus was social and work collaborations.

“It draws people to have those ‘casual collisions’ where you can grab someone just to catch up,” Anas said.

Smartsheet shrank its physical office space footprint due to the pandemic. The company now rents spaces for large events. It’s also valuing conferences as a means for reconnecting workers, including the upcoming AFROTECH Conference in Austin.

While these companies are coming up with strategies that seem to be working, it’s clear that there will be ongoing challenges as employers and employees redefine work.

Microsoft Chief Scientist Jaime Teevan gave a presentation at the GeekWire Summit, sharing results from a recent Microsoft study that revealed a big disconnect between employees and their managers. It found that 87% of surveyed workers say they are productive at work, but only 12% of leaders say they’re fully confident their employees are productive.

The results came from a survey of 20,000 people at companies in 11 countries.

“No one questions that we’re working more,” Teevan said. Microsoft has collected data showing increases in the number of meetings being scheduled and the hours people are working and emailing.

But that doesn’t tell the whole story. The problem, Teevan said, is “leaders aren’t convinced that their employees are working on stuff that matters.”

And while many employers are eager to get workers back into the office for a variety of reasons, the draw for workers is the chance to socialize with colleagues and rebuild their teams, the Microsoft research showed.

There is still so much learning that needs to happen, Teevan said.

“It’s not even just new skills that we need to learn. It’s a whole new mindset,” she said. “We need to be doing this experimentation. We need to be [using] what we’ve learned.

“If we can do that, we have this opportunity to completely reimagine work,” she said, “and hopefully create a new and better future work.”

Seattle’s record-setting warm and dry weather is both random and a dress rehearsal, experts say – GeekWire