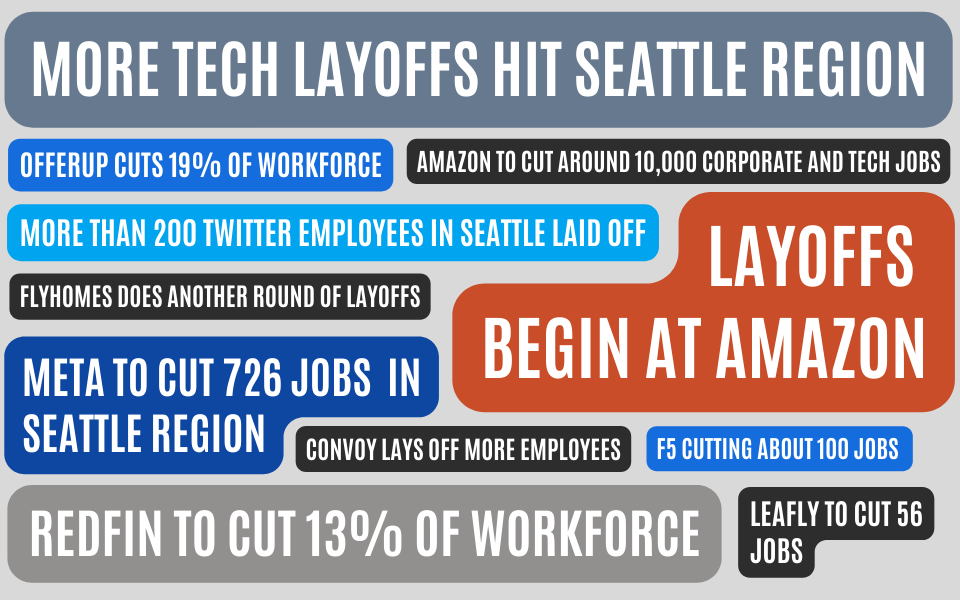 After nine years in tech marketing in Seattle, working his way up from individual contributor into management, James Carroll decided earlier this year that he was ready for a break to refresh his outlook and reset his career.

Like many others, he had spent his 20s and early 30s in a booming tech industry, defined by seemingly limitless expansion and unending job opportunities.

Working with a career counselor, Carroll made sure his household finances were in order, and gave an ample three months’ notice at the startup where he was working. He planned to take a few months off, exploring new areas of marketing or even a new field such as cybersecurity, before jumping back into the job market.

The reality he’s now facing is not at all what he expected.

“I might actually need to dip into that savings for a period of time, because I might be unemployed longer than I ever thought,” he said. “It just shows how quickly the market and economy and personal situations can change.”

The sky is not falling from the tech industry. Thousands of layoffs in the past two months represent a small fraction of the tech sector’s growth over the past two decades. But cutbacks and hiring freezes are suddenly transforming the job market into a condition that some in the industry haven’t experienced in their careers.

The balance of power has shifted from job seekers to tech employers. For quite some time, there have been more available tech jobs than people qualified to fill them, putting engineers and experienced tech workers in positions of strength when looking for work and negotiating pay.

It might seem like a lifetime ago, but it was just this year that Amazon, Microsoft and others boosted compensation to keep pace with inflation and retain employees.

Compared to that, the past few weeks feel like an alternative reality.

“For the first time in over a decade, the Seattle tech scene has morphed into an employer-driven market,” said Albert Squiers, managing director of the technology practice at Seattle-based recruiting firm Fuel Talent.

There are parallels to what has happened in the housing market, where the balance of power shifted rapidly from sellers to buyers, said Doug Sayed, founder and managing principal at Applied HR Strategies Inc., a compensation consulting firm based in Seattle. Companies seeking talent are in a much stronger position.

“I think it’s the beginning of a sea change,” he said. “It has happened very quickly.”

Companies that are still hiring have a better chance of landing tech talent. This sudden reversal might be unsettling for tech workers, but it’s creating some relief for startups and other companies that were previously competing against the likes of Meta, Amazon, Twitter, and Microsoft for key hires.

“Based on conversations I’m having, there are still many companies with big hiring plans in Q1 – they might just not be the names we are accustomed to seeing,” Squiers said.

Not only have many of those larger companies frozen hiring, but thousands of their former employees are now searching for employment.

“It’s potentially a good thing for well-funded and/or profitable small- to mid-size tech [companies], that more people are coming onto the market, and more people are going to be looking for work,” Sayed said.

Non-tech companies are benefitting. Job offers from large enterprise organizations such as banks and insurance companies are being accepted more often than those from fast-growing tech startups, according to data from Karat, a Seattle-based startup that helps companies conduct technical interviews.

The components of pay will change for some workers. There has yet to be any wholesale decline in tech wages, but those who go to from tech giants to smaller startups shouldn’t expect the same level of pay, in general, Sayed said.

The components of compensation will also change for those who go from a public company that offers equity compensation, to a startup that offers stock options but no short-term opportunity to cash them out.

Openings are getting filled faster. In recent years, most companies aspired to a 60% close rate, representing the percentage of candidates who accept job offers, said Jeffrey Spector, Karat’s president and co-founder.

Over the past two quarters, Karat is seeing a 70% close rate for top candidates on offers from the companies it works with.

“Candidates are still finding jobs, but they’re not as likely to be receiving multiple competing offers as they were a year ago, which does give smaller companies more opportunities to hire top candidates,” Spector said.

The quality and experience level of candidates on the market has increased noticeably. Karat says the percentage of engineering candidates who meet the standard hiring bar is going up after a year of declines, and is now 25% higher than normal. Spector said this “indicates a very strong labor pool.”

As little as three months ago, companies were seeing an uptick in job candidates but weren’t consistently getting applications from people with the right experience. That promises to change now, said Sandy Matus, chief people officer at Textio, the Seattle startup whose technology identifies bias in workplace communication.

The increase in experienced candidates could limit options for others looking to expand into new areas. “It may be a hard time to jump into a new field,” Matus said. “It’s not impossible, but it may be harder as you’re competing with people that have experience in that area.”

Remote work is creating new opportunities. Recruiters say they’re seeing more Seattle-based engineers join companies headquartered out of state, without relocating. This was the exception rather than the rule in past downturns.

The sudden job losses represent a small portion of long-term growth … so far. Employment in Washington state’s information industry, which includes many tech jobs, dropped by 5,900 jobs or more than 3% in mid-October, compared with the prior month, according to data from the state Employment Security Department.

In raw numbers, it’s the biggest overall monthly decline in the history of the state’s information sector, according to ESD data. And it doesn’t include several high-profile layoffs announced in late October and early November, said Anneliese Vance-Sherman, regional labor economist with the Employment Security Department.

However, it’s against a backdrop of massive growth over the past two decades.

“From my perspective it remains to be seen if this is a blip or a game-changer, but there are still some great opportunities out there, and we live and work in a community with great technical talent,” said veteran technical recruiter Jason Greer, managing director of GeekWork, the recruiting business unit of GeekWire.

Greer has been speaking regularly with GeekWire readers who’ve lost jobs in tech. He describes the sentiment as “somewhere between uncertain and hurtin’.”

At the same time, he said, there’s also “a thread of hope, if not optimism.”

“Readers I’m speaking with believe we’ll bounce back, and I cannot recall a single one who is looking to leave the Greater Seattle area,” he said.

Job seekers are adjusting their expectations, timelines, and long-term plans. Carroll, 35, spent nearly eight years at Tableau Software, through the Seattle-based data visualization company’s acquisition by Salesforce, before working for a year as director of field and digital marketing for startup Heap Analytics.

As he prepared for his sabbatical earlier this year, Carroll considered making a “hard pivot” in his career. He explored the idea of going through the training and certification necessary to becoming a cybersecurity analyst, which has been one of his longtime interests. He has since decided that he’s not ready to make that move.

One complicating factor: his partner works at Amazon, and while she hasn’t been impacted by the layoffs announced last week, the situation has created an extra degree of uncertainty in their household.

Carroll is now in his fourth week of actively searching for his next job in marketing, reaching out to his network, getting advice from mentors, exploring openings at the companies that are still hiring, and putting out feelers for roles that could open up after the new year.

After years in which engineers and other experienced tech workers could count on repeated inquiries on behalf of companies seeking to persuade them to change jobs, the sudden silence from recruiters has been unnerving.

He’s keeping an upbeat outlook through it all.

“I’m not super pessimistic, which is good,” he said, “but I think I’m much more realistic now that it’s not going to be as easy finding a job as I thought would have been two or three months ago.”

How have you been impacted by the changing tech job market? Tell us your story at [email protected].

MDaudit Strengthens Its Position In the Revenue Integrity Market