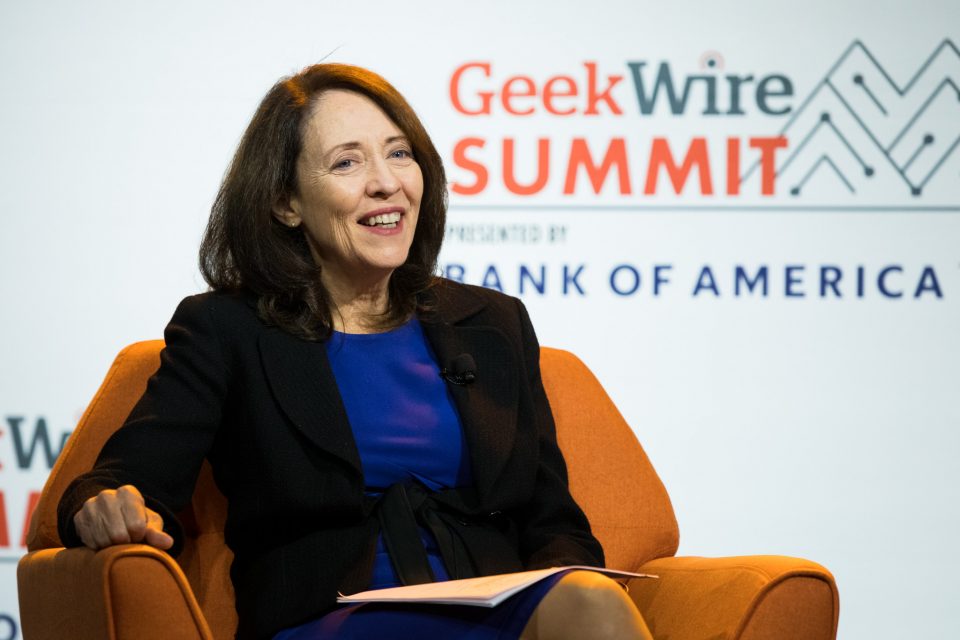 If there’s one thing U.S. senators can likely agree on, it’s that there’s little that they agree about. So how did Washington’s Sen. Maria Cantwell recently manage to secure bipartisan support for passage of the $280 billion CHIPS and Science Act?

The Democratic lawmaker and others used a multi-pronged strategy that included educating colleagues about the security risk that the U.S. faced by losing its ability to develop and manufacture high-tech products. The approach worked, managing to out maneuver opposition by Republican leader Sen. Mitch McConnell. Senate Majority Leader Chuck Schumer called Cantwell “relentless year in, year out” in working for passage of the legislation.

The bill includes incentives for reinvigorating semiconductor manufacturing in the U.S. and invests in R&D for AI, robotics, clean energy, nuclear power, quantum and other areas.

It still had numerous critics, including a prominent member of Cantwell’s own party. U.S. Sen. Bernie Sanders called it a “blank check” for the semiconductor industry and voted against it.

I interviewed Cantwell at the 2022 GeekWire Summit about the journey to building support for the legislation, which passed with bipartisan votes in the House and Senate. Here’s what she said.

While the U.S. invented semiconductors, the country only produces 12% of the chips worldwide despite the fact that they’re pervasive in our lives.

Now Taiwan is a leader in chip production, and China is spending billions to build its own capacity. The recent global chip shortage hampered production of essential goods including American cars. If growing political tensions were to cut off supply from Asian chip makers, it could impact the production of countless products, experts warn.

After the meetings, “people were ready to go,” Cantwell said. “They were like, ‘Let’s get this bill done. Let’s get this over the goal line.’”

Lawmakers in 2021 passed initial legislation to boost American chip production. That earlier bill, Cantwell said, woke up the rest of the world to U.S. plans to grow its semiconductor production. Europe began taking steps that could have drawn manufacturing to its shores instead.

The potential economic impacts troubled lawmakers from across the aisle. They needed to approve the CHIPS Act to unlock funding.

“We’ve passed this [2021] bill, and you’re going to now let this investment go to Europe, instead? You’re going to be buying chips in euros. Let’s not do that,” Cantwell said. “And that became a compelling message to the Republicans.”

Intel, the U.S. chip manufacturing heavyweight, announced plans in January 2022 to build a new facility in Ohio. But when the CHIPS and Science Act and the financial support that it included became uncertain, the company canceled a July groundbreaking.

“They said, ‘Well, I’m putting this on hold until this legislation passed.’ And that also was a wake up call. Because listen, we haven’t seen a lot of big manufacturing announcements in the Midwest,” Cantwell said.

Following passage of the bill, Intel broke ground on the Ohio facility in September.

Connecting dots from R&D to implementation and jobs

The U.S. in recent decades has shown less interest in big investments in basic science. The CHIPS Act dramatically increases funding for the National Science Foundation (NSF), the Department of Energy (DOE) and national labs. It creates the role of tech directorate at NSF, who will help turn scientific discoveries into commercialized technologies.

“This was literally saying we want to dust off our R&D skills at universities, at NSF, at DOE, and keep our eye on how to help manufacturers translate the science faster into application,” Cantwell said. “Why? Because we’re facing competition from people around the globe who are doing the same thing.”

In some ways, Cantwell said, the legislation became a test for American lawmakers to demonstrate that they could still come together over important issues.

“[W]e were being watched around the globe. Could we pull this off? Could the institution of Congress that seems so divided, so partisan, dwelling on misinformation — could you really come together and do something as successful as passing this legislation?” she asked. “And the answer, the answer was yes.”

Steve Ballmer on the strategy behind ‘ClipperVision’ – GeekWire