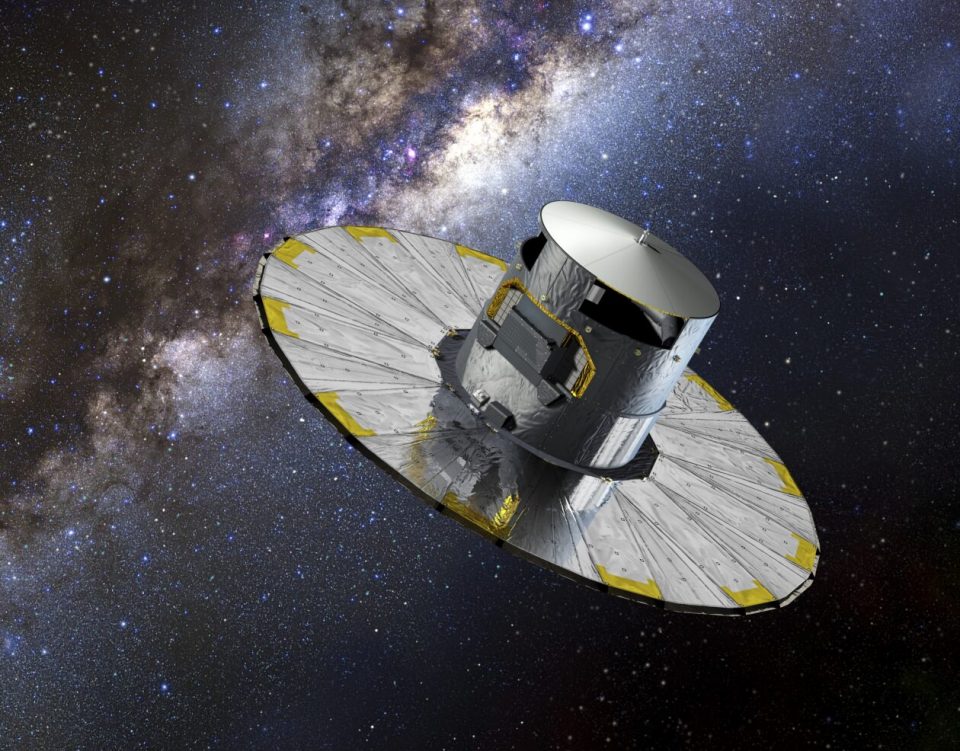 Could far-off aliens be sending out signals telling us they exist? If so, how would we know where to look? Researchers focusing on the search for extraterrestrial intelligence, or SETI, have laid out a new strategy for focusing their quest.

The strategy applies simple trigonometry to millions of data points, with the aim of seeking out potential interstellar beacons that are synchronized with hard-to-miss astronomical phenomena such as supernovae.

University of Washington astronomer James Davenport and his colleagues lay out the plan in a research paper submitted to the arXiv pre-print server this month. The idea is also the subject of a talk that Davenport’s giving this week at the Breakthrough Discuss conference in California.

“I think the technique is very straightforward. It’s dealing with triangles and ellipses, things that are like high-school geometry, which is sort of my speed,” Davenport told GeekWire half-jokingly. “I like simple shapes and things I can calculate easily.”

The pre-print paper, which hasn’t yet been published in a peer-reviewed journal, draws upon data from the European Space Agency’s Gaia sky-mapping mission. But Davenport said the technique is tailor-made for the terabytes of astronomical data that will be coming from the Vera C. Rubin Observatory nightly when it goes online, a couple of years from now.

Davenport and his SETI colleagues start out with a couple of assumptions: First, the aliens have to want to communicate, and they have to be able to build a means of communicating. “The idea from the extraterrestrial’s standpoint would be, perhaps you have the technology and the capacity to make some kind of beacon, some kind of lighthouse that you want to shine,” Davenport said. “But it’s very expensive to shine in all directions at all times.”

So when do you turn that beacon on? One strategy would be to synchronize the beacon’s flashes with observations of cosmic flare-ups. “It’s like playing ‘Marco Polo,’” Davenport explained. “This big thing has happened. Somebody yells ‘Marco,’ and you yell ‘Polo,’ or you say, ‘We saw it, too. Do you see us?’”

The best example of a cosmic flare-up in recent times would be SN 1987A, a supernova blast that occurred at a distance of 168,000 light-years and was spotted on Earth 35 years ago.

The light from SN 1987A’s flash has been spreading out in a widening sphere for more than 168,000 years, and will continue spreading out to farther reaches of our celestial neighborhood. If a farther-out alien civilization wanted to synchronize its beacon flash with the supernova flash, we would see it on a time-delayed basis, due to the finite speed of light.

If you know the distance to a given star, it’s relatively simple to figure out when it’s on the edge of a “SETI Ellipsoid,” where the timing is right for the alien beacon flash to occur and have its light detected by earthly astronomers. But it’s not so simple to keep track of the millions of stars in the ever-widening ellipsoid.

Two trends in astronomy are making it progressively easier to monitor SN 1987A’s SETI Ellipsoid. One is the move toward large-scale sky surveys such as Gaia, which is measuring the distance to faraway stars with unprecedented levels of precision. The other is the rise of “Big Data” analytical tools, such as the algorithms being developed at the University of Washington’s DiRAC Institute.

Using such tools, Davenport and his colleagues checked thousands of stars in Gaia’s catalog, all within 326 light-years (100 parsecs) of Earth. “The vast majority of nearby stars are still viable targets for monitoring over time,” they reported.

On average, 734 stars are due to pass through the SETI Ellipsoid on a yearly basis. “While this is a large number of targets to monitor each year, it is well within the capability for many surveys,” the researchers say.

When it comes to scanning the skies for synchronized signals, SN 1987A isn’t the only game in town: Other SETI Ellipsoids can be plotted for a wide range of astronomical phenomena, including galactic novae, gamma-ray bursts and neutron star mergers.

Identifying what appears to be a synchronized signal would be only the first step in an investigation of a given target.

“The worry is that we end up with a scenario like the ‘Wow Signal,’ where you’ve got this really interesting signal, and no repetition or other follow-up to show you what it is, or if it’s ever repeated,” Davenport said. “That is definitely a concern.”

A seemingly synchronized flash could well turn out to be a cosmic coincidence, perhaps involving mysterious anomalies like the dimming and brightening in a star system known as KIC 8462852 or “Tabby’s Star.” Several years ago, some astronomers proposed that the phenomenon might be traced to an alien megastructure, but now the leading hypothesis is that a dust cloud was the cause. “It’s still a very interesting object, because we still don’t know what the dust is,” Davenport said.

Davenport has been enlisting students to develop ways to use Big Data more efficiently for SETI. “There are lots of tricks that we can take, and we can write them down as algorithms and stick them into databases and computers and big machines, and then let them run,” he said.

In addition to SETI Ellipsoids, such algorithms could focus on what’s known as the Earth Transit Zone, a band of the night sky where alien astronomers could theoretically see Earth transiting our own home star. And in addition to analyzing the Gaia database, Davenport and his SETI colleagues could sift through observations coming from the Zwicky Transient Facility and NASA’s Transiting Exoplanet Survey Satellite, or TESS, plus the data that’s due to be generated by the Rubin Observatory’s LSST survey.

Davenport acknowledged that the ellipsoid search strategy was a long shot — which is why it’s important to leverage existing data over the long term, perhaps over the course of centuries.

“We don’t know what some other civilization might think is the right way to build a lighthouse,” Davenport said. “We don’t know what would make sense to them, or what would be conspicuous. So instead, let’s make the best use of the data that we have, because we’re spending a lot of time and energy and money developing that data for a host of other reasons.”