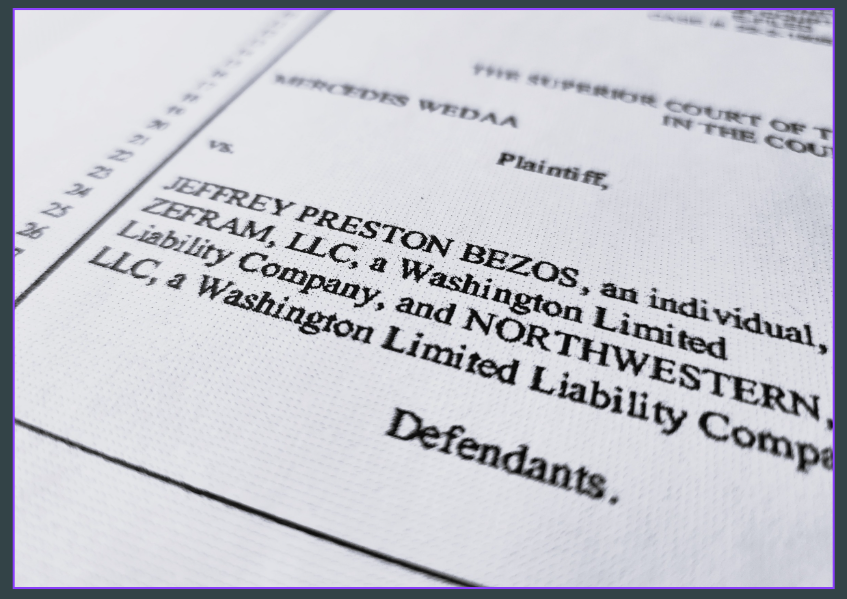 A housekeeper who says she worked for nearly three years at Jeff Bezos’ Seattle-area home claims she was subject to racial discrimination and retaliation from members of his personal staff, wasn’t able to take legally required breaks, and didn’t have adequate access to a bathroom on the job.

Among her allegations: housekeepers were forced to regularly climb out a laundry room window, running along an exterior path and through a mechanical room to access a bathroom used by groundskeepers, because they weren’t allowed to enter the main home when the Bezos family was there, except to clean.

That claim is part of a lawsuit filed Tuesday on behalf of housekeeper Mercedes Wedaa against Bezos and two entities through which the Amazon founder manages his personal investments and properties, Zefram LLC and Northwestern LLC.

“We’ve investigated these claims, they have no merit, and we’ll defend against them,” said the lawyer, Harry Korrell of Davis Wright Tremaine LLP, via email.

The suit, filed in King County Superior Court in Seattle, identifies Wedaa as a housekeeper who has worked for “wealthy/high-profile families” for 18 years, in positions including supervisory and leadership roles.

She worked previously at the Seattle-area residence of the late Microsoft co-founder, Paul Allen, who offered dedicated staff quarters for breaks, with readily accessible bathrooms, and “even provided food for the housekeepers and other employees,” according to the suit.

In contrast, there was no designated breakroom for housekeepers at the Bezos home, the suit alleges. Wedaa would often work for 10-12 hours without breaks to rest or eat lunch, according to the lawsuit. The suit claims that she and other housekeepers developed urinary tract infections as a result.

The suit alleges that staffers demeaned and disrespected Wedaa and other Hispanic employees in ways that they did not treat a white housekeeper; and claims that Wedaa was wrongfully terminated after raising complaints about alleged discrimination, undue retaliation, and working conditions.

“Plaintiff considered herself an employee of Jeff Bezos, as did the other housekeepers,” the suit says. “Sometimes when the Bezos family was home, Plaintiff interacted with them as her employer. Plaintiff followed orders and directives from Jeff Bezos and his girlfriend Lauren Sanchez.”

According to the suit, Wedaa worked primarily at Bezos’ main Seattle-area residence, but occasionally at his other homes. Hired in September 2019, she later became lead housekeeper, overseeing 5 to 6 people, the suit says.

“My client is extremely credible,” said lawyer Patrick McGuigan, of HKM Employment Attorneys LLP, who filed the suit on behalf of Wedaa. “She’s a hard-working American, a person who’s been in this industry for some years now, housekeeping for wealthy, high-profile families. She’s never had any issues with anyone.”

Wedaa is seeking financial damages for back pay and benefits lost, pain and suffering, emotional distress, and other claims.

The suit names Bezos in his personal capacity, and does not cite Amazon as a defendant. Separately, the challenge of adequate time for bathroom breaks has been brought up in the past at Amazon warehouses by workers concerned about reaching productivity targets. The company has adjusted its policies in response.

Here’s a copy of the lawsuit.

Most popular stories on GeekWire for the week of July 17, 2022 – GeekWire