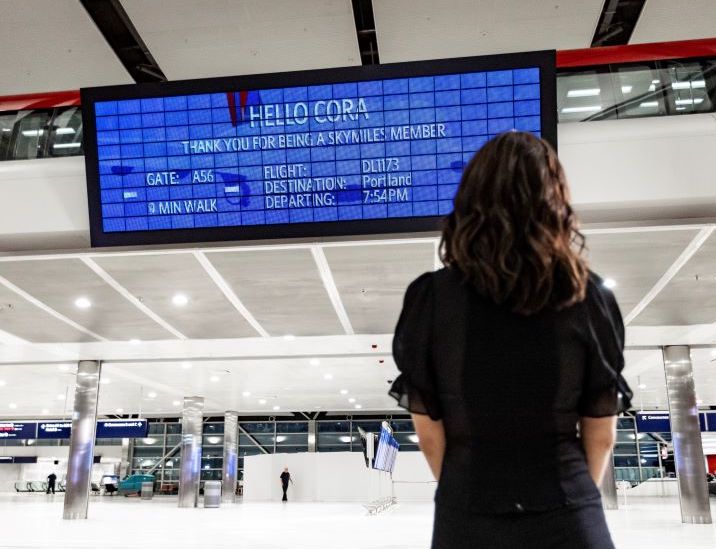 A startup with Microsoft and Redmond, Wash., roots is reaching new heights with technology that could change the way travelers access their flight information at airports.

The technology was developed by Misapplied Sciences, a startup founded by a small team of Microsoft and Walt Disney Imagineering veterans. GeekWire profiled the company and experienced what it called “mind-bending” tech in 2018. The company has since moved its headquarters to Pasadena, Calif.

Delta is using the high-tech departure board in Detroit as part of its digital identity experience, which allows travelers who opt in to use facial recognition to speed such processes as baggage check, security checkpoints and boarding.

Parallel Reality works with the naked eye and shows different information to different people standing in front of the same screen. It allows up to 100 customers to each see personalized flight information tailored to their unique trip.

Unlike traditional pixels, each of which emit one color of light in all directions, Misapplied Sciences says its pixel can send different colors of light in tens of thousands or even millions of directions.

“Multiple people can be looking at the same pixel at the same time, and yet perceive a completely different color,” Albert Ng, the company’s CEO and co-founder, previously told GeekWire. “That’s each individual pixel. Then, we can create displays by having arrays of these multi-view pixels, and we can control the colors of light that each pixel sends. After coordinating all those light rays together, we can form images at different locations.”

When combined with location technology and sensors, similar to those already embedded in a smartphone, the company says this content can be targeted in real time from public displays to specific locations, people and objects, essentially following them in three-dimensional space as they move through the world.

Ng was previously a research intern at Microsoft. He co-founded the company with Paul Dietz, a former Microsoft senior researcher who left Misapplied Sciences in 2019, and Dave Thompson, the chief operating and creative officer who is a veteran of Walt Disney Imagineering, where he led the design of theme park attractions and cruise ship experiences.

Microsoft’s president on turbulent times for the company, country, and world – GeekWire

Microsoft to cut 10k jobs, about 5% of workforce, and take $1.2B restructuring charge – GeekWire