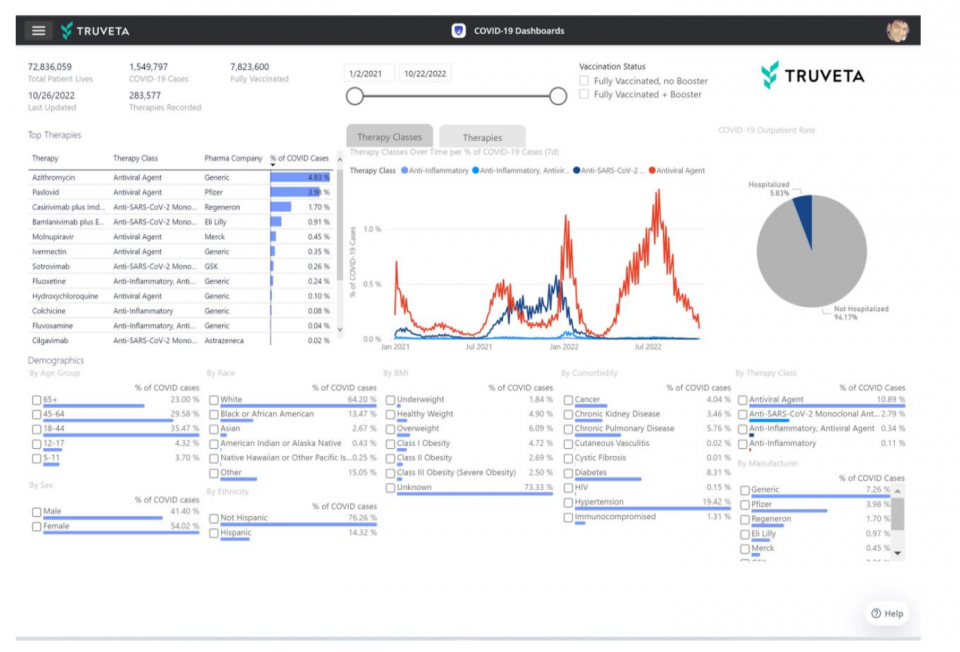 More than two years after its founding, health data startup Truveta released a platform Tuesday that provides access to information from more than 70 million patients. The tool, Truveta Studios, culls de-identified data from patients across the startup’s 25 health system partners.

“It’s a system that’s been designed to study any condition, any drug and any device,” CEO Terry Myerson told GeekWire.

Health data is in demand by medical providers, as well as drug companies and academic researchers developing new tools and treatments. Linking treatments with outcomes and underlying health can enable researchers to better understand the effectiveness of health interventions.

Other efforts to mine claims or electronic healthcare data are often siloed at individual health systems. The result is “really limited findings that might not transfer to all communities,” said Truveta’s vice president of clinical informatics, Michael Simonov.

Truveta Studio pulls from a massive dataset, representing about 16% of all U.S. healthcare, from 43 states. The patient population is also ethnically, racially and socio-economically diverse.

Similar to how Google queries the collection of information on the internet, Truveta queries a vast healthcare data landscape, said Myerson. “We’re searching the American medical records system and bringing you the results,” he said.

Truveta updates data daily from its partners, pulling together events from throughout a patient’s medical history, including diagnoses, medications, procedures and devices.

Users can query for a specific condition, such as long COVID, and quickly pull up associated demographic data such as age and sex of patients. Users can also narrow their dataset to people who have long COVID and another condition like chronic kidney disease.

Such real-time data would have been useful early on in the pandemic, for instance to assess patients intubated at different stages of the disease, said Simonov, who is also a physician. In April, Truveta released a preprint study linking certain pre-existing conditions with increased risk for COVID-19 hospitalization.

A major computing challenge has been combining data from systems that use different processes, definitions and systems, said Simonov.

“We really needed to think of the web of concepts and how to store that in a way that’s retrievable and usable by the user,” added Simonov.

Truveta aimed for consistency and transparency in how it defines conditions and stratifies patients, enabling researchers to skip these steps before mining the data. But the platform also allows users to shift these parameters within its library to adapt them to their own research.

“Truveta Studio offers a dataset that’s huge, comprehensive, and up to date. And the Truveta Library makes it easy to do critical documentation and communication about how we’re defining our cohorts,” said Ari Robicsek, Providence chief medical analytics officer and senior vice president of research, in a statement announcing the system.

Providence, the largest health system based in Washington state, was involved in forming the company and has fostered a growing collection of startups.

The Truveta platform is available to health researchers within the company’s partner institutions, which include Providence, and to outside customers. Customers include pharma giant Pfizer and medical device company Boston Scientific.

Can Amazon change healthcare? Experts sound off on tech giant’s $3.9B deal to buy One Medical – GeekWire