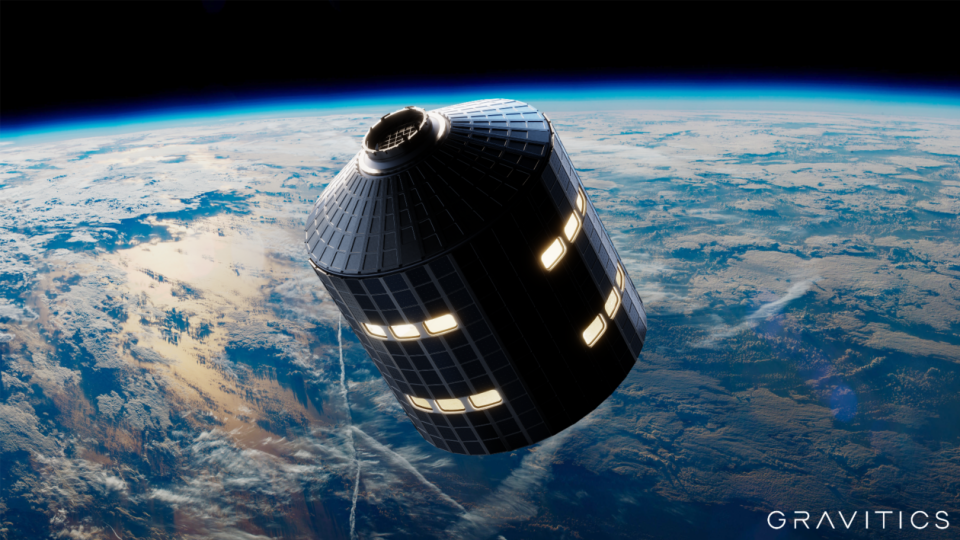 A space venture called Gravitics has emerged from stealth with $20 million in seed funding and a plan to build space station modules at a 42,000-square-foot facility north of Seattle, in Marysville, Wash.

As NASA makes plans to phase out the International Space Station in the 2031 time frame, Gravitics and its backers are betting on a rush to launch commercial outposts to low Earth orbit. The operators of those outposts just might need subcontractors to provide the hardware.

Gravitics’ main offering will be a super-sized module known as StarMax. The general-purpose module would provide up to 400 cubic meters (14,000 cubic feet) of usable habitable volume — which represents nearly half of the pressurized volume of the International Space Station.

Multiple StarMax modules could be linked together in orbit like Lego blocks.

“We are focused on helping commercial space station operators be successful,” Colin Doughan, Gravitics’ co-founder and CEO, said today in a news release. “StarMax gives our customers scalable volume to accommodate a space station’s growing user base over time. StarMax is the modular building block for a human-centric cislunar economy.”

“The case for Gravitics is simple,” said Tarek Waked of Type One Ventures, who has joined Gravitics’ board of directors. “Having scalable space infrastructure that is 100% made in the United States is good for the space industry, good for the country, and is just the beginning of an effort that the whole world will benefit from as space becomes more and more accessible.”

Doughan brings nearly two decades of aerospace industry experience to the venture: He was a senior finance manager at Lockheed Martin from 2003 to this January — and served as a co-founder of Altius Space Machines, which was acquired by Voyager Space Holdings in 2019.

Other leading members of the Gravitics team include chief engineer Bill Tandy, a veteran of Ball Aerospace and Jeff Bezos’ Blue Origin space venture; and director of engineering Scott Macklin, former head of propulsion at Virgin Orbit. Gravitics says its workforce has grown to nearly 40 people, including full-time employees as well as contractors.

Construction permits and job listings point to Marysville, which is about 40 miles north of Seattle, as the site of Gravitics’ 42,000-square-foot facility for development and early production. The company says it’s already begun assembly of its first StarMax prototype, and is preparing to conduct module pressure tests in early 2023.

The ground-based pressure tests would open the way for an orbital test mission that’s yet to be announced. Pre-orders are being taken for module delivery by as early as 2026.

Gravitics is likely to face challenges as it tries to break into a market alongside major players including Thales Alenia Space (which is manufacturing space station modules for Axiom Space); Sierra Space and Blue Origin (which are working on modules for the Orbital Reef space station); Northrop Grumman (which is developing its own space station concept) and Lockheed Martin (which is part of the team for the Starlab space station project, led by Nanoracks).

In a TechCrunch interview, Type One’s Waled said he expected SpaceX’s Starship super-rocket — which is still under development — to open up new opportunities for Gravitics in the years to come. “We’re betting on Starship revolutionizing the industry,” he was quoted as saying.

Because of its size, Starship would be the most suitable rocket for launching StarMax modules, but Gravitics says other launch vehicles could be used as well.

TechCrunch said Gravitics’ executives were already talking with development groups in Florida about building a production and integration facility near NASA’s Kennedy Space Center — with a square footage exceeding that of the Marysville facility.