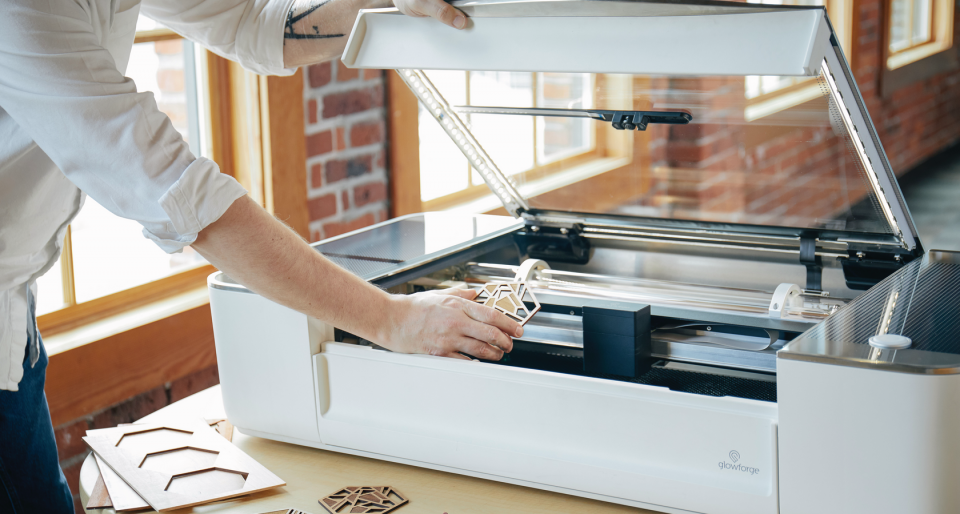 Glowforge, the 3D laser printer maker based in Seattle, announced a $43 million Series E investment led by DFJ Growth, with participation from all existing investors. Founded in 2014, the 180-person startup reported more than $100 million in revenue last year and expects to be profitable in 2022. We caught up with CEO and co-founder Dan Shapiro to learn more about how the company raised a round in turbulent economic times and more. The interview was edited for brevity and clarity.

GeekWire: Thanks for talking with us, Dan. This is an interesting time to raise a round, with venture capitalists slowing their investments and asking startups to trim expenses.

Glowforge CEO Dan Shapiro: We looked at the the economy in terms of buying and inflation and everything else. We can see demand moving in any which direction. It really made sense to build a strong balance sheet so that we can continue to execute on our plans and take advantage if there’s a great opportunity that comes up. It’s an up-round from our prior investment round. It puts us in the position where we’re not with our backs up against a wall.

Talk about the state of the business.

The latest big change has been expanding the universe of people who are purchasing. It used to be almost entirely people buying and putting them at home. Now about a third of our sales are to schools, more than 3,600 in total. We’ve also just launched an international expansion and are now selling both online and through retailers in the U.K. In the U.S., we have partnerships with both Michaels and JOANN and we’re expanding into more retail stores so people can go see the printers and buy materials for a project when inspiration strikes.

I interviewed former Nike COO Eric Sprunk at the 2015 Geekwire Summit — you were on stage, too, giving your Glowforge elevator pitch — and he talked about being able to print Nike shoes at home. We’re not there yet. Is it ever going to happen?

I was talking to someone last week who wanted to work for Glowforge and they asked what motivates me. I said, let me show you. I share my screen and I go to Instagram and search for #Glowforge. I saw this. That got me pretty stoked. Technology is now letting kids as young as eight create and print their own sneakers. We’re getting there. We are getting to a world where you can actually create the things around you, where you can print your own shoes from scratch at home.

Yes. The way I describe it is, the road is covered in potholes. We’ve just built some pretty good shock absorbers. It had us completely stocked out for two years. Now we’re able to stay in stock, but it requires amazing and heroic work on our supply chain, operations, and manufacturing teams in order to keep things keep things rolling because we get new surprises every day.

Talk about the competitive environment for Glowforge.

We just completed a customer survey and we asked about other products people considered buying. 80% of our customers were not looking at any other products. People are discovering the ability to create and they previously thought it was out of reach.

The products that are out there are really well suited for engineering and folks who are familiar with CAD and who don’t mind maintaining products themselves.

But the beautiful, simple product that creates that thing in your imagination at the push of a button. It’s simple enough it’s used in kindergartens, and powerful enough that people are using it to run businesses for their full-time income. There’s really nothing like that out there. And we get these incredible creators of all ages who can bring these ideas to life without having the engineering degree or background in CAD software or educational privileges.

bitchy | “Michael B. Jordan finally scrubbed the photos of Lori Harvey from his IG” links

Elon Musk moves to back out of $44B Twitter bid – GeekWire