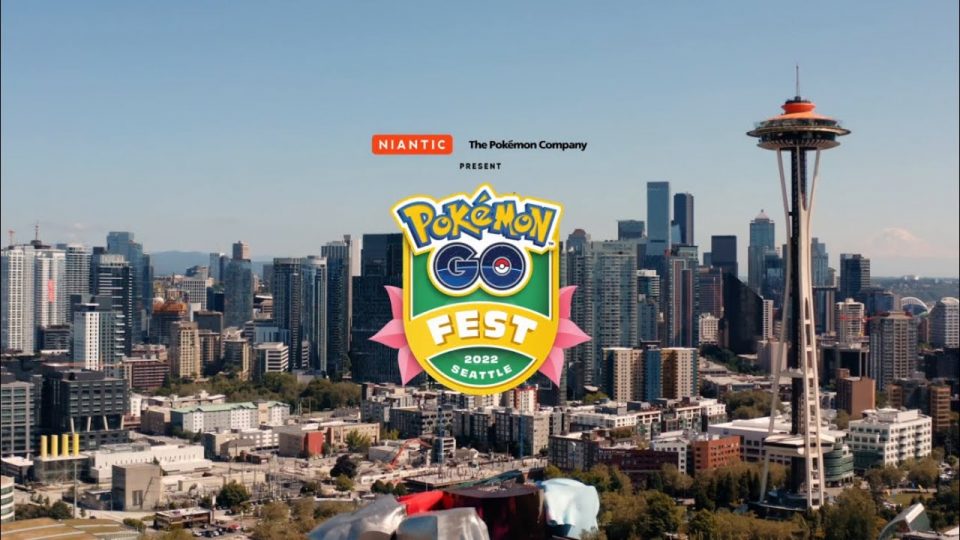 Tens of thousands traveled to Seattle this past weekend in search of one common goal: catching all of the Pokémon.

Niantic, makers of Pokémon GO, picked Seattle Center as the first in-person Pokémon GO Fest location in the U.S. since 2019.

Pokémon GO launched in 2016 to global fanfare and has become one of the most successful augmented reality mobile games, raking in $6 billion in revenue from player spending to date, including $1.3 billion in 2021, according to data from SensorTower. It has been downloaded more than 678 million times worldwide.

The game spawns Pokémon in the real world. Players can catch Pokémon by finding them on a map; they can also trade or battle with others as they gain experience and level up their player rank.

The area underneath the Space Needle at Seattle Center transformed for Pokémon GO Fest. The event blended virtual and real-world environments by granting ticket holders access to exclusive in-app missions and Pokémon in real-world habitats created by Niantic.

The event featured in-app missions that let trainers explore four environments through Seattle Center and in the broader downtown core to search for special mythical Pokémon like Sky Forme Shaymin and Buzzwole. The area was full of trainers wearing GO Fest T-shirts and keychains of their favorite Pokémon.

The appeal of Pokémon spanned across generations as kids, teens, older adults, and entire families scoured the city streets in hope of encountering a rare mythical Pokémon. Fans weren’t just there to take pictures with Pokémon like Eevee and Pikachu. Trainers were there for the community; everyone I encountered quickly asked to trade friend codes.

Humberto Kam, director of global live events Pokémon GO at Niantic, said Niantic’s goal is to “get people out exploring the world.” Kam was excited to see other trainers in real life and the excitement on players’ faces when they encountered event-exclusive Pokémon.

“That’s what it’s all about, getting those Pokémon that people have been waiting on and are just excited about,” Kam said.

Niantic, which has an engineering office in Bellevue, Wash., raised $300 million at a $9 billion valuation last year and said it wants to build a “real-world metaverse.”

Niantic’s vision for GO Fest aligns with Pokémon’s enduring philosophy of “bringing the world together through Pokémon.” Trainers could engage with others by advertising Pokémon they wanted to trade. They also participated in player-vs.-player battles at the Battle Ground, which featured special guests like former Seahawks star Richard Sherman.

Each area of Seattle Center was bustling and full of activity at all points of the day – from the team tents to the food court and merchandise line.

The game environment was fluid and immediately initiated my Pokémon GO Fest quest without trouble. I was met with a brief narrative about the Ultra Beasts and able to catch Pokémon I ordinarily didn’t see in the game – including more Unown than I had ever seen in my life playing Pokémon games.

While I enjoyed seeing how Pokémon GO had grown since I first downloaded the game, I left with two critiques of the event that I would like to see implemented in future GO Fests. Unlike the trading card and video game, players are usually moving while playing Pokémon GO. I found myself accidentally bumping into others while trying to follow the virtual map and my real world surroundings.

It would be easier to encounter Pokémon in congested areas if the game had the functionality to focus on a specific Pokémon and automatically initiate battle when encountered, so trainers could keep their eye on the real world instead of struggling to select their desired Pokémon.

Additionally, it would have been nice to see the in-game quest spaced across all three days instead of a few hours. This would incentivize trainers to spend more time in the Seattle Center rather than rushing to complete tasks in time to encounter mythical Pokémon.

Despite these shortcomings, Pokémon GO Fest was a refreshing event that brought people from a variety of backgrounds together for one common interest — a sight seldom seen outside of sporting events.

Niantic held an in-person GO Fest event in Berlin earlier this month, and will head to Sapporo, Japan, next week. It is hosting a Pokémon GO Fest finale event on Aug. 27 that will feature special Pokémon.

Hydrogen-powered plane revs up for tests in Washington state