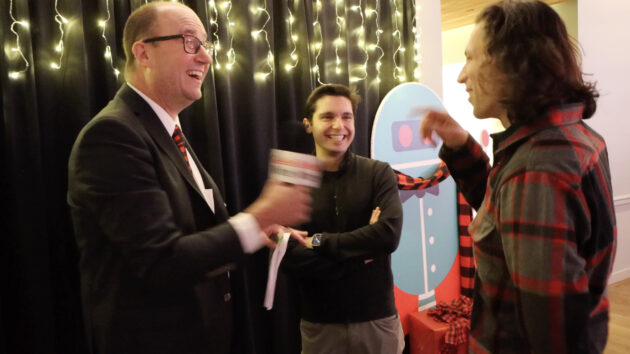 Startup entrepreneur and investor Ben Gilbert, co-founder and managing director of Pioneer Square Labs and PSL Ventures, is always watching for the next big tech wave. He concedes that there have been plenty of false starts in the industry in the past: augmented and virtual reality, “personal audio computing,” and more.

But Gilbert, who also co-hosts the popular podcast “Acquired,” didn’t hesitate for a moment when asked recently what he believes will be the most important technology of 2023.

“ChatGPT based on GPT 4,” he said, referencing a future version of OpenAI’s conversational chatbot running on the next version of the AI company’s large language model.

In its current form, ChatGPT is receiving widespread interest for its remarkable ability to answer questions (mostly accurately) in response to simple requests. It’s the leading example of the growing popularity of generative AI as a means to create content ranging from sonnets to abstract art.

In a sign of the technology’s move toward mainstream awareness, Microsoft CEO Satya Nadella bragged at the company’s annual shareholder meeting this week that the AI model powering ChatGPT was trained on Microsoft’s Azure cloud supercomputer. Microsoft is a major investor and a key strategic partner in OpenAI.

“I think for all the hype around generative AI, it is under-hyped. We’re having an App store moment,” Gilbert said, referencing the opportunities created for startups by the 2008 launch of Apple’s marketplace for iPhone apps.

“I feel like what we’re seeing right now with ChatGPT is so mind-blowing,” he said. “There’s a whole new frontier of people that are excited to build things that create value for customers on this tool.”

Recent conversations inside Pioneer Square Labs have focused on how much of their attention should shift to generative AI, with Gilbert raising the question of whether it should be their entire focus. (No, or not yet, at least.)

Gilbert and his Acquired co-host David Rosenthal were two of the business and tech leaders who spoke with me about the challenges of the past year and their outlook for the future in conversations at the GeekWire Gala on Dec. 4. We recorded and assembled their answers for this week’s episode of the GeekWire Podcast.

Appropriately, in advance of the event, I asked ChatGPT to help me brainstorm questions.

Eerily, with some of those questions, the AI was thinking along the same lines as I was. I say this with a bit of hesitation, because it makes me worry that I am not being imaginative enough in coming up with questions.

That said, I’ve learned from experience that the best path in these situations is to keep it straightforward and simple. Overly complex or creative questions tend to throw people for a loop and kill conversations, especially at parties.

In that way, ChatGPT was right on the mark. It’s a clear example of the ways that AI is increasingly proving its ability to augment and complement knowledge workers, at least. I had already planned to ask a form of the second question in ChatGPT’s list, about the biggest challenges each person faced in 2022, and how they overcame them.

To be sure, on the question of the most important technology of 2023, the answers weren’t confined to AI. Sara Lindquist of the FUSE venture capital firm acknowledged the popular trend but pointed in a different direction.

I imagine a lot of answers here tonight will probably be around generative AI, which we’re certainly bullish about here at FUSE,” Lindquist said, citing portfolio companies Pictory and WellSaid Labs. At the same time, she said she’s a believer in technology “empowering the front edge,” including “frontline workers, industrial IoT, real world assets, etc.”

Jeff Sears, co-founder and managing partner at TalentReach, said augmented and virtual reality continue to represent a key trend and focus for many of the clients that Seattle-based staffing agency is working with.

Mark Nelson, who recently stepped down as CEO of Salesforce’s Tableau Software, cited the ongoing significance of data analysis and visualization (Tableau’s specialty) in the context of artificial intelligence and machine learning.

Allume Group founder Andrea Leigh, e-commerce and retail industry consultant and educator, pointed to the ongoing need for technology to bridge the worlds of brick-and-mortar stores and online shopping.

The shift to AI-powered prescriptive analytics (not just descriptive and predictive) was one of the key points in a larger group conversation with Leigh and others who collaborate on “The CPG Guys” podcast:

Technology Alliance CEO Laura Ruderman joked that she hopes technology will solve the problem of long lines at SeaTac Airport. On a serious note, she said there’s still a need for better technology for hybrid conferences, such as the Policy Matters: Innovation Basics event that the Tech Alliance held last week.

Matt Oppenheimer, CEO of Remitly, which offers international money remittances and financial services for immigrants and their families, offered a global perspective. The continued growth of smartphone penetration and affordable broadband access

Later, it struck me: how would ChatGPT answer the question about the most important technology of 2023? Its response was basic and perhaps obvious in some ways, but also impressive and humble in that it referenced AI generally without citing itself as an example.

But the final question that I asked each person was not inspired by ChatGPT, or any other robot, and it generated some of the most insightful and inspiring responses from the people I spoke with:

What’s your biggest hope for the new year?

“The ability for people who have different opinions to have civil conversations,” Ruderman said.

Oppenheimer echoed that sentiment, saying he hopes for “a deeper understanding of those that are different than ourselves,” moving away from the silos and isolation that were accelerated by the pandemic.

Just to make sure, I asked ChatGPT the same question.

Score one for humanity … for now.

What do you think the most important technology of 2023 will be? Send an email message or voice memo to [email protected] to be considered for inclusion in a future GeekWire episode and post.