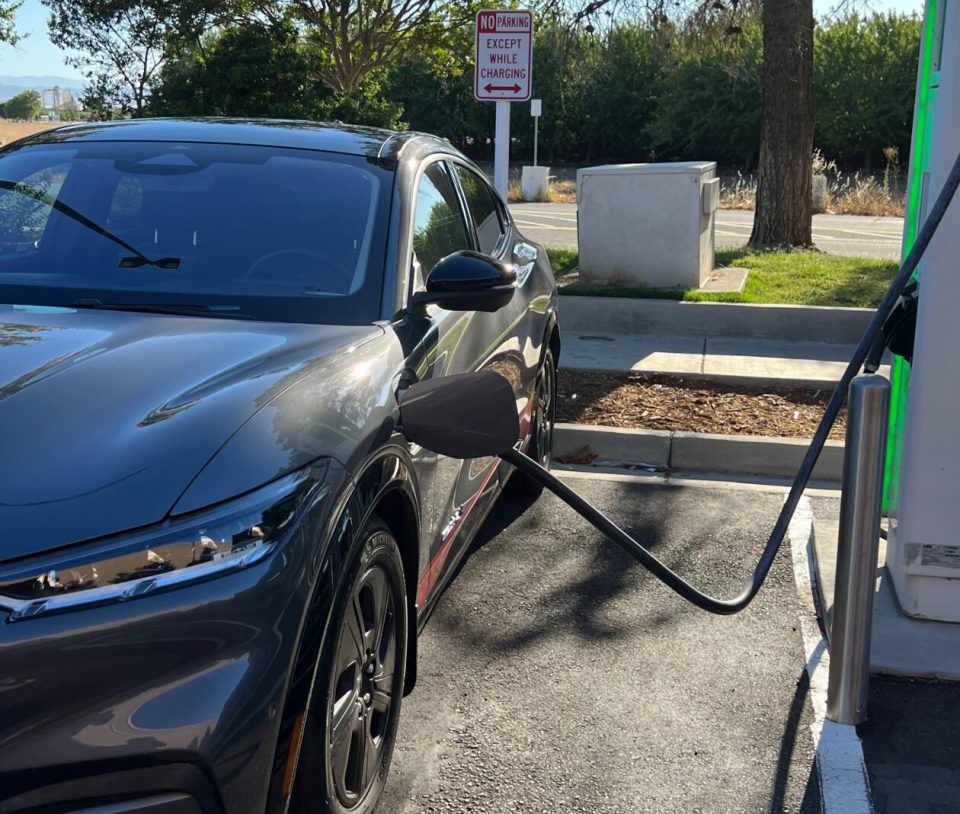 Aaron Blank set out for a West Coast road trip with his son to see some baseball and more between Los Angeles and Seattle and back down. He came away from the drive with some hard lessons learned about the realities of traveling long distance by electric car.

Blank is CEO and president of Seattle-based public relations firm Fearey, and he’s been splitting his time between Seattle and L.A. since the start of the COVID-19 pandemic.

Already the owner of a Tesla Model X, Blank purchased a 2021 Ford Mustang Mach-E this spring. He left L.A. on July 16 for a two-week trip with his 10-year-old son, Ermias. The plan was to take Ermias to basketball camp in the Bay Area, work in hotels along the way and visit some major and minor league ballparks.

A 35-picture Instagram story details much of what Blank dealt with on the drive north and south when it came to running low on battery power, finding charging stations, dealing with malfunctions at those stations, calling customer support, waiting in charging lines, waiting for his car to charge, and more.

“If you’re doing a travel adventure with an EV, we’re just not ready for that yet,” Blank said of the charging infrastructure that is needed in the U.S. to support the growing legions of electric vehicle drivers.

And more of those drivers are indeed coming.

Bloomberg reported in July that a “society-altering shift” is happening as the U.S. is the latest country to pass a critical EV tipping point of 5% of new car sales powered only by electricity. According to Bloomberg’s analysis, this threshold “signals the start of mass EV adoption, the period when technological preferences rapidly flip.”

Blank has flipped, and on his trip he was ready to flip out more than once. And he didn’t leave home completely naive to the realities of EV mileage or the lack of charging station proliferation.

“I planned this trip, planned the stops,” Blank said. But driving a car with a universal plug left Blank with fewer charging options than the Tesla drivers he encountered along the way. At many stops, Tesla’s own Superchargers — the company boasts 35,000 units worldwide — far outnumbered universal chargers from other providers such as Electrify America, EV Go and Charge Point.

Blank is used to the ease of shorter local drives in L.A. and charging at home overnight. His previous long for a trip was a drive between L.A., San Diego and Palm Springs, Calif. He likes his new Mustang, but Tesla’s head start on the competition is clear.

“I would encourage folks to just seriously consider their options,” Blank said. “If they’re looking to do long travel, I would go Tesla.”

His Instagram story is peppered with frustrating quips at nearly every stop.

Blank was also frustrated by a lack of instructions and busy work on his smartphone.

“Each station you have to download an app or give them your information,” Blank said. “On this West Coast drive I probably set up eight different apps and registered with different companies … they don’t work together.”

Blank’s roughest stretch was between Portland and Seattle — a 3-hour drive in ideal traffic for someone driving a gas-powered car. The trip took Blank six hours and saw his battery juice level dip as low as 8% at one point. It took 2 1/2 hours to charge back to 80%.

“That whole trip from Portland to Seattle was a nightmare,” he said.

But he also offered tips along the way for anyone who might be considering a similar journey.

Help should be on the way in the form of more government dollars. Bloomberg reported on President Biden’s $5 billion plan to “eliminate America’s EV charging deserts” and build a nationwide network of 500,000 charging stations linking urban and rural areas coast to coast.

The report says that the state plans to invest roughly $71 million over five years, plus nearly $18 million of non-federal matching funds, to install the stations.

Blank has no regrets about his switch to EVs and said he is going “all-in on electric.” He’s adding solar panels to his roof at home and a battery cell in his garage to store the excess energy.

And even after everything he experienced getting from L.A. to Seattle and back, there was no beating being on the road with his kid.

“We had a fantastic trip. It was a good adventure.”

Eviation wins an order from Evia Aero for 25 electric airplanes