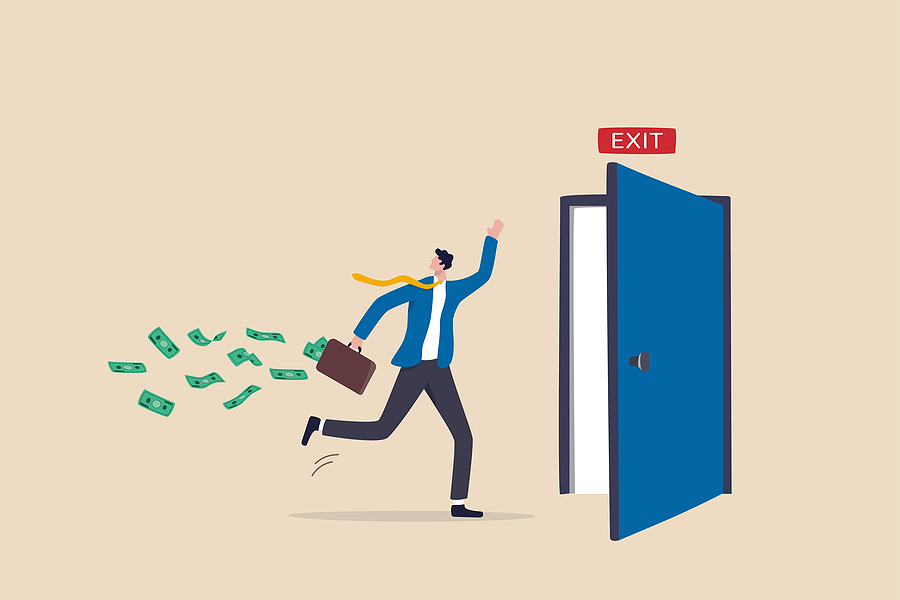 It’s getting harder for an early-stage company to find a buyer.

The exit value for U.S. venture capital-backed startups in the second quarter was the lowest it’s been in more than five years, according to a report released Wednesday by PitchBook.

After an already slow first quarter, analysts estimate there were just 831 total exits through the first half of the year, representing $49 billion in exit value. In 2021, there were 883 deals worth $372.2 billion during the same period.

VC-backed startups look to liquidate their shares, or exit, as a way to return cash to shareholders. Companies can go public by filing for an initial public offering or by merging with an already public-traded special-purpose acquisition company, or they can try to get acquired by another company.

But with rising interest rates and a looming recession, exit activity is quickly decelerating, analysts say.

Many late-stage companies that may have been on the road to a public listing might need to rethink their exit strategy, the report said. It added that startups that rely on public market valuations to price their financing rounds needed to “cool pricing expectations.”

In the Pacific Northwest, there were no VC-backed companies that went public through an IPO or a SPAC merger through the first half of the year. Meanwhile, the Seattle startups that managed to go public in 2021 by merging with a SPAC have all struggled, each declining by more than 50% since previous highs.

She added that there is “significant liquidity on the sidelines,” pointing to the $2 trillion of cash on corporate balance sheets in the S&P 500 and another $750 billion of U.S. private equity funding that has yet to be spent.

Despite this, in the Pacific Northwest, there were just 10 merger, acquisition, or public listing deals through the first half of the year, compared to about 60 for all of 2021, according to GeekWire’s M&A and IPO list.

When public listings decline during a downturn, in theory it should “kickstart a flurry of new acquisition activity,” the report says. However, there are a few factors currently in play that could slow or suppress that uptick.

Many publicly-traded tech corporations use stock to acquire companies. However, amid the downturn, these offers look less attractive to sellers, the PitchBook report says. Public companies are also being advised to limit spending, and they could abandon acquisition activity altogether.

Another factor is that many startups are seeing their valuations — the price buyers would need to pay for their company — depressing in the current climate. Private companies often use multiples from a comparable publicly-traded corporation as a basis for their own valuation, meaning a declining stock market also entails a lower price tag for their startup, which could disincentive startups and their investors from exiting at the moment, the report said.

Many startup founders and VCs have misaligned expectations as to what they believe their startup is worth versus what the market is willing to pay for it, said Aviel Ginzburg, general partner at Seattle’s Founders’ Co-op.

He said corporations acquire startups to obtain their talent, but because many companies are cutting costs and doing layoffs, these types of acquisitions “make a lot less sense.”

Acquisitions in tech are also often made with the intent of expanding a company’s suite of products or services, Ginzburg said. He added that in uncertain times they’ll opt to hold out.

“If the market cares more about margins and fundamentals than growth, then these kinds of acquisitions just don’t make sense,” he said. “Cash ain’t free anymore.”