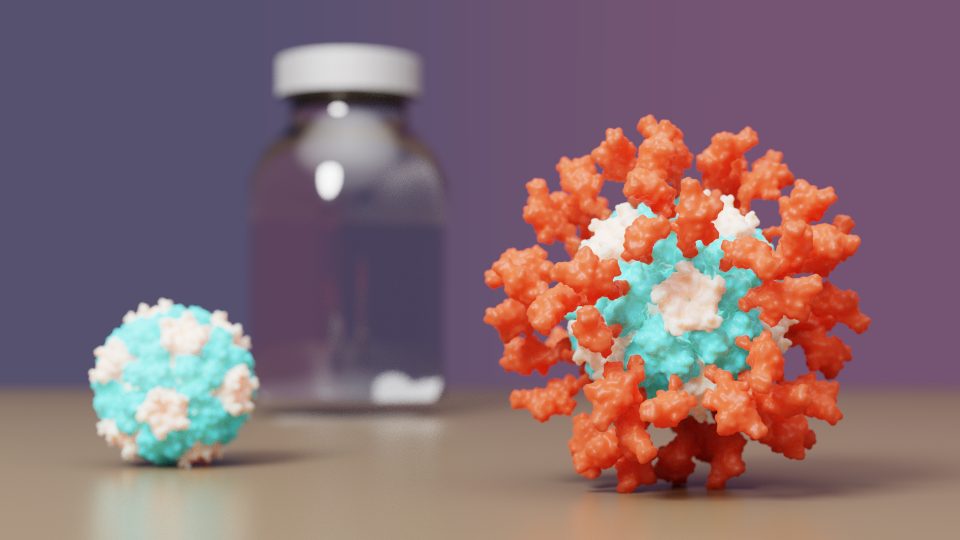 Both vaccines are stable at refrigerator temperature and were developed with an eye towards worldwide distribution, including in areas of the word under-served by COVID-19 vaccinations.

The UW’s all-protein vaccine has its origins in the labs of biochemistry researchers David Veesler and Neil King, based at the UW Institute for Protein Design. The shot “heralds the emergence of computationally designed proteins in medicine,” said King in an interview with GeekWire earlier this month.

The vaccine is a spherical particle studded with portions of the viral spike protein; it self-assembles from the separate components, easing manufacture.

The UW shot was licensed to South Korean biopharma company SK bioscience, which combined it with an adjuvant from GlaxoSmithKline. GSK’s adjuvant serves an immune-boosting function in the vaccine, called SKYCovione.

The Korean Ministry of Food and Drug Safety approved SKYCovione for adults over aged 18 and the South Korean government agreed to purchase 10 million doses for domestic use. In addition, SK bioscience is seeking approval for authorizations at other regulatory agencies, including for emergency use listing to the World Health Organization.

The vaccine with origins at HDT Bio is based on RNA, like the approved vaccines from Moderna and Pfizer. But the new shot is additionally powered to make multiple copies of itself, which yields a potent vaccine at lower doses, and at lower costs. It’s also easier to manufacture, according to HDT.

HDT Bio licensed the vaccine to Emcure subsidiary Gennova Biopharmaceuticals, based in Pune India, and is embroiled in a lawsuit alleging that Emcure stole its trade secrets and failed to share clinical data. The company has not released its phase 3 study on the shot. Gennova reportedly has 7 million doses on hand.

The UW shot is the first vaccine or therapy approved based on computational design, King told GeekWire earlier. “To me that is a watershed moment,” he said. And SK bioscience data show it prompts a robust immune response.

In King’s view the data suggest SKYCovione could have the potential to go head-to-head with known RNA vaccines, he told GeekWire. Though the shot was not tested directly against the Moderna and Pfizer vaccines, based on the SK bioscience data SKYCovione may be “at least as potent” he speculated in the interview.

Many earlier shots were approved based on clinical efficacy against the disease, but the use of measures of immunity may become more common as researchers understand more about how they correlate with protection.

“I anticipate this will become more and more common as the pandemic evolves,” said Veesler in an email. A recent preprint study led by researchers at Fred Hutchinson Cancer Center, for instance, showed that neutralizing antibodies tracked with protection against Novavax’s vaccine.

Data from earlier clinical trials of SKYCovione are available as a preprint study and the phase 3 data will be published soon, said Veesler.

SK bioscience is currently working on a study evaluating the shot against Omicron and other COVID-19 variants. The platform also has potential to be used as a shot to protect against a range of variants said King, which SK bioscience is also studying.

The idea is to stud the nanoparticle with protein fragments from different variants.

When King and his colleagues began to think about how to commercialize their vaccine, they took two routes. One was licensing their tech to SK Bioscience. And another was developing it within UW vaccine spinout Icosavax, founded on the platform technology.

The idea was to “take two shots on goal and try to move fast to help the pandemic,” said King in the earlier interview. King is an Icosavax co-founder and chair of its scientific advisory board.

In retrospect, the strategy was a smart move, said King. In early clinical studies, the Icosavax vaccine did not raise as robust an immune response as SKYCovione. When Icosavax released its data in in early March, it said the results were “below our expectations.”

Icosavax is now investigating whether the difference can be attributed to its manufacturing approach or the distinct adjuvant it uses, said King. The company also released early-stage clinical trial data today showing a “robust” immune response to a different vaccine against respiratory syncytial virus.

The UW vaccine has the same blueprint as already-approved vaccines for hepatitis B and human papillomavirus. “You could argue that our vaccine is a more traditional vaccine modality,” said King. The software simply helped the team generate the best design.

The approval of SKYCovione should help pave the way for medicines that will emerge in the future from the fast-growing field of computational protein design, added King.

How To Overcome Technology Challenges In Healthcare