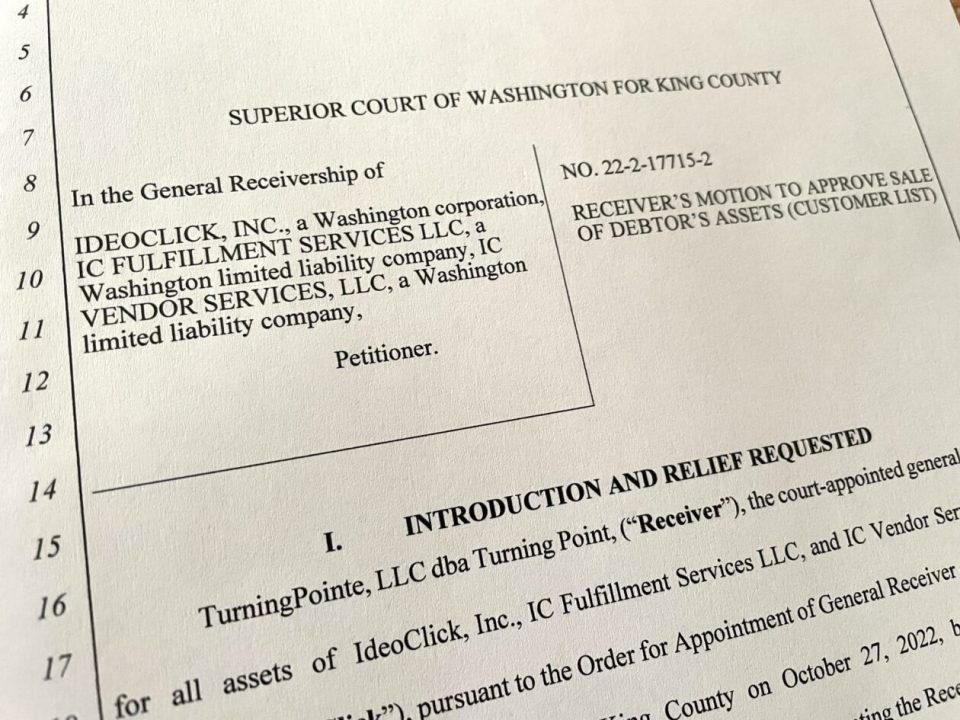 CommerceIQ, a Silicon Valley e-commerce company that helps retailers boost online sales on Amazon and Walmart, is set to acquire assets from Seattle startup Ideoclick, according to court documents reviewed by GeekWire.

Receivership is often used by companies that are struggling financially. When a company is placed in receivership, a trustee is legally appointed to oversee its assets and business operations.

That trustee, Turning Point, submitted a new document Monday in King County Superior Court outlining a plan for CommerceIQ to pay $475,000 to acquire customer lists from Ideoclick, among other assets.

A hearing is scheduled for Nov. 10 to approve the deal, which would allow CommerceIQ to retain Ideoclick’s 59 employees and provide services to customers through Nov. 30.

“CommerceIQ has entered into an agreement to purchase certain Ideoclick assets that will help provide continuity of services to Ideoclick customers and maintain the employment of a portion of Ideoclick staff,” a CommerceIQ spokesperson said in a statement to GeekWire. “CommerceIQ is committed to providing Ideoclick customers with the level of service they expect, and to mitigating any disruption as they enter this important season. Customers will now also benefit from the advanced capabilities of CommerceIQ’s retail ecommerce management platform.”

The latest court filing details a dramatic past weekend for Ideoclick.

The court appointed Turning Point as the receiver on Oct. 27. The firm determined that Ideoclick needed to cease a majority of operations on Oct. 31, primarily due to concerns about making payroll, according to court filings.

The company had around $5 million in cash as of Oct. 21, court filings show.

Several employees took to LinkedIn last week to announce that the company was shutting down Oct. 31.

But then on Oct. 28, CommerceIQ reached out to Ideoclick and expressed interest in purchasing customer lists, according to court filings.

Two other parties showed interest in acquiring Ideoclick’s assets, but ultimately the receiver entered into an agreement with CommerceIQ. The company agreed to pay $475,000 for Ideoclick’s customer lists and the rights to receive payments to the company for services provided on or after Nov. 1. The cash will help Ideoclick maintain operations for one month and transition customers to CommerceIQ.

It’s not clear why Ideoclick elected to go into receivership. We reached out to Ideoclick CEO Benjamin Winters for comment on the latest filings. We’ll update if we hear back.

Winters joined the company in 2018 after his agency was acquired by Ideoclick. He took over as CEO earlier this year after the departure of co-founder and longtime leader Justin Leigh, who is now running another e-commerce services company, Workflow Labs.

Leigh co-founded Ideoclick in 2009 with Tom Furphy, who was chairman. Furphy is also CEO of Replenium, an auto-replenishing retail company that is still operating. Leigh and Furphy both previously worked at Amazon.

Ideoclick raised $13 million to date, according to PitchBook, including a $7 million round in 2019.

The company laid off 40 employees, or one-third of its workforce, earlier this year.

Industry watchers we spoke with described Ideoclick as stuck in a difficult position in the competitive market for e-commerce agencies — too small to compete with the big players but too big to be acquired easily.

There are also supply chain issues and inventory problems facing Amazon vendors, the companies that supply Amazon with products. That’s on top of moderating consumer demand that Amazon highlighted last week in its earnings report, driven in part by inflation.

“It’s been a very rough year for Amazon vendors and the agencies, like IdeoClick, who support them,” said Jason Boyce, CEO of Avenue7Media, an agency that works with third-party retailers on Amazon.

Founded in 2012, CommerceIQ raised a $115 million Series D round earlier this year, valuing the company at more than $1 billion. Investors include SoftBank, Insight Partners, and Seattle’s Madrona Venture Group, which recently interviewed CommerceIQ CEO Guru Hariharan on its podcast.

Ideoclick is among several startups in the Seattle region, many started by former Amazon employees, that aim to help online retailers selling on Amazon and other major platforms. That group includes Stackline and SoundCommerce. Others such as InsightLeap, Downstream, and Gradient have been acquired in recent years.